A look at the Mid-Season Invitational landscape so far

The Garena Premier League, which came to the Philippines for the first time for the 2017 Spring Split, just ended and the GIGABYTE Marines came out on top. The Vietnamese team goes on to represent South East Asia at the 2017 Mid-Season Invitational in Brazil. The tournament features 13 teams from the best regions around the world to compete for glory. This will be your guide to the Riot-hosted tournament and all the teams who won their respective Spring splits.

For this year, Riot announced a change to the tournament’s format. Regional seed placement will be based on previous results from the past two years of MSI and Worlds. Riot chose to have their sample size at two years for two reasons.

Within a single year, there can be considerable variance in competitive results, so we don’t want to solely rely on the most recent year of performance to determine seeding. For example, although Albus NoX Luna from CIS performed extremely well at Worlds 2016, it was their first appearance at an MSI or Worlds. We don’t believe it fair to use solely that performance to assume that CIS is stronger than LMS, who didn’t have a team make it to the Quarterfinals, but have performed well at previous events.

On the other end of the spectrum, large structural changes have occurred globally since 2014 (for example, the division of LMS and GPL), and will continue to occur in our young sport. With this kind of rapid evolution, results from 3 years ago aren’t great indicators of current regional strength. 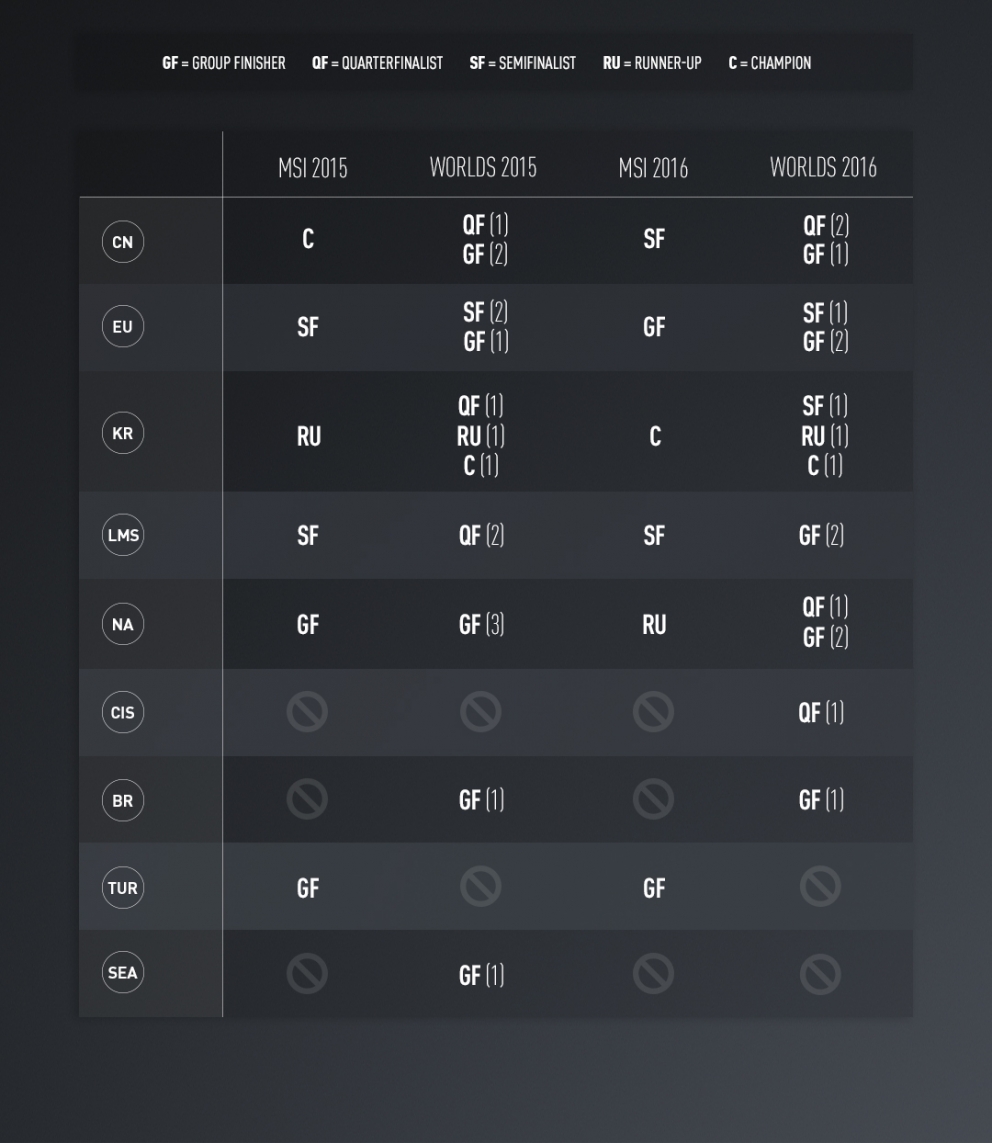 The #1 seed from each of the following regions will start in the Play-In Stage, Round 1: BR, CIS, JPN, LAN, LAS, OCE, SEA & TUR. These regions are not being treated as a collective as they used to be – there is no more “Wildcard” status. Rather, each region’s performance is being evaluated individually, and that is what determined their 2017 event seeding and will continue to affect their seeding at future international events.

Based on the results of the last two years of MSI and Worlds, the top three performing regions (China, Europe, and Korea) will get direct seeds to the Group stage of MSI 2017. Group stage will still have 6 teams competing.

The next two regions, LMS and NA, will proceed to Round 2 of the newly introduced Play-In Stage.

The remaining regions (BR, CIS, JPN, LAN, LAS, OCE, SEA & TUR) will be placed in Round 1 of the Play-In Stage. The Play-In Stage will randomly place these eight teams into two groups, and they will play in a Best-Of-1 Double Round Robin.

The Play-In Stage Draw Show just happened today and you can watch it below.

Group A will be having BR, OCE, TUR, and JPN. Over at group B we will see CIS, LAN, LAS, and our very own SEA.

The GIGABYTE Marines from Vietnam stormed their way through their own VCSA and the GPL, not dropping a single series throughout both tournaments. With their aggressive playstyle they look to put SEA on the international League competitive scene.

With a sweep in the Latin America North League Spring Finals, and their 8th LAN Championship, Lyon Gaming look to bounce back and avenge their loss at the IWC Qualifiers for Worlds 2016.

The oldest and most well known team in the region, Isurus Gaming were the favorites coming in to the CLS Spring 2017 Split. With their stellar coaching staff, incredible macro game, and fighting spirit, they make a formidable team in the Play-In Stage.

Virtus.pro clawed their way through the LCL Playoffs with two five-game series against fan-favorites M19, formerly known as Albus Nox Luna, and Vaevictis eSports. With their organizations success in other games like Dota 2 and CS:GO, Virtus.pro have big shoes to fill as they represent their organization, and their region.

Brazil’s Red Canids’ 7-man roster look to have the home court advantage, as they breezed through their CBLOL competition. With the most passionate fans behind them and one of the most passionate esports players in the world in Brazilian legendary player brTT, they’re out to show that they have what it takes to take on global competition.

Dire Wolves, while they have been consistently strong, leveled up their already strong gameplay in the OPL Playoffs. With smart macro plays and drafting, the Dire Wolves are set to put OCE on the League competitive map.

Although they finished second place at the LJL Regular Split, they bounced back and swept their rivals DetonatioN Gaming in the Finals in an upset victory. Can they bring home the MSI trophy with their explosive performance, and three new players in their roster?

The TCL have yet to determine their representative at MSI. They play their Finals April 22nd with SuperMassive eSports going up against CREW eSports Club.

The LMS have yet to determine their representative at MSI. They begin their playoffs on April 21, Where we will see Machi 17, J Team, ahq e-Sports Club, and Flash Wolves battle it out for the LMS Spring title, and MSI glory.

The NA LCS have yet to determine their representative at MSI. The NA LCS Spring 2017 Finals will pit rivals Cloud9 and Team Solo Mid. This marks the 6th time the two teams will face off at the finals, with the current record at 3-2 in favor of TSM. We will see if history is on TSM’s side or if C9 can get their revenge on April 23.

The EU LCS have yet to determine their representative at MSI. We will see the dominant G2 Esports face off against the equally strong Unicorns of Love. Can G2 pull off a hat trick for their third consecutive EU LCS title? Or will the Unicorns of Love prevail and smash all their doubters? We find out on April 23.

The LCK have yet to determine their representative at MSI. The LCK Finals will be a treat to fans as the famous Telecom Wars unfolds and crowns its new LCK Champion. The regular season was in SKT’s favor, as they won the two meetings against KT Rolster. KT look to ride their momentum after two 3-0 performances against MVP and Samsung Galaxy in the playoffs.

The MSI Play-In Stage takes place at the CBLoL Studio in Sao Paulo on April 28 – May 6. Group Stage kicks off on May 10 in Rio de Janeiro.