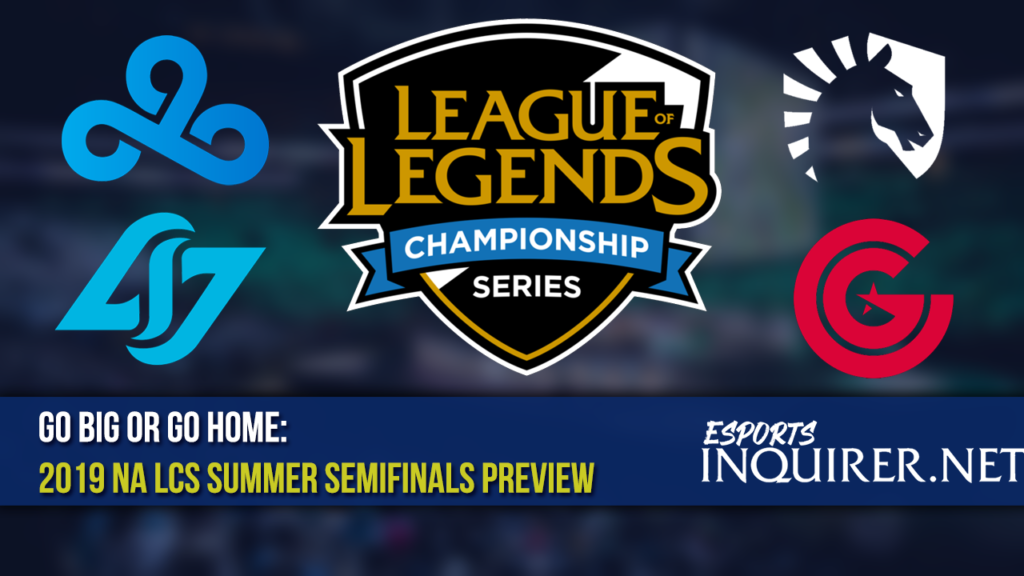 Season finals for the LoL Championship Series, North America’s official circuit for League of Legends, is coming up soon. But before that is the semifinals tilt with Cloud9, Counter Logic Gaming, Team Liquid, and Clutch Gaming — teams with vastly different backgrounds but the same goal: making it this year’s World Championships.

Having the time to practice and prepare for the semifinals, will Cloud9 and Team Liquid be able to handily take wins away from the battle-hardened Counter Logic Gaming and Clutch Gaming respectively and punch their tickets to Worlds? Or will the two up-and-coming rosters cause upsets that will shake the region for months to come? Here’s what you need to know about the 2019 LCS Semifinals happening this weekend.

Battle of Legacies: C9 vs CLG

One series away from a coveted return to the Finals, legacy organizations Cloud9 and Counter Logic Gaming are truly on the verge of reclaiming the throne that has one way or another escaped their grasp split after split.

Coming out of the regular season second only to Team Liquid despite Nicolak “Jensen” Jensen’s leave from Cloud9 in the past year, the organization has, as it always does, found a way to recover and further bolster their roster by taking in European mid Yasin “Nisqy” Dincer. With Dennis “Svenskeren” Johnsen and Nisqy’s formidable mid-jungle synergy, Cloud9 is easily the favor in their upcoming quarterfinals match.

But don’t count Counter Logic Gaming and its botlane duo of Trevor “Stixxay” Hayes and Vincent “Biofrost” Wang out of the fight just yet. As proven in their one-sided Quarterfinals showing against Optic Gaming, CLG is fully capable of playing well around the opposing halves of the map.  Its aforementioned botlaners and import top laner Hyeong-min “Ruin” Kim  have shown that they can take on any situation with much effectiveness. If Raymond “Wiggily” Griffin is able to consistently outmaneuver Svenskeren in the upcoming best-of-five, CLG will have what it needs to reclaim what they have lost.

David vs Goliath: TL vs CG

Team Liquid comes out of the rubble of the Summer split unscathed, unbent, and nigh undefeatable. With a monumental performance in the Mid-Season Invitational, the reigning champions of North America have their eyes set on the Worlds trophy and nothing less. Liquid’s individual players are hailed as the region’s finest with all of them making the LCS All-Pro teams. To lose here would undercut the expectations set on their storied carry in Yiliang “Doublelift” Peng and cast a few doubts coming into their Worlds run.

Still, if there’s an organization you can count on to take down legacies here and there, it’ll be Clutch Gaming. Across the board, Clutch Gaming’s carries will have to step it up a notch to match their laning counterparts. Tanner “Damonte” Damonte has the chance to solidify himself as a respectable homegrown talent in North America, while Liyu “Cody Sun” Sun finally has his hardfought opportunity for redemption. With Taeyou “Lira” Nam at the helm of Clutch Gaming’s successes, we’ll see if Clutch can come close to putting an end to Liquid’s dynasty before it can begin.