It’s the waning hours of Sunday evening. I’m in the middle of a crowd of hundreds in a tent at a casino located on the opposite side of Metro Manila from where I live. Despite looming obligations in the coming days, I’m shouting my lungs out to the point of exhaustion to the tune of top-level Tekken 7.

It’s nearing midnight. In two hours, I have to get back home if I want to have any semblance of a good rest before school starts up in the morning. In eight hours, I have a paper due that I really should have put more effort into.  Despite common logic, I don’t want this moment to end.

It definitely won’t be the last. 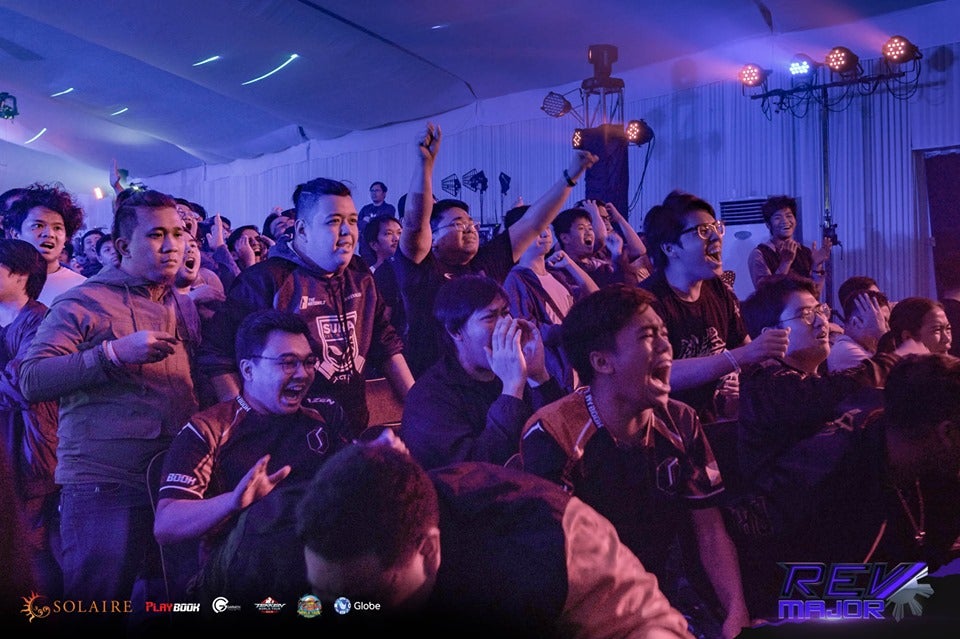 The crowd showing their energy. Credits to REV Major/Gariath Concepts.

To make things clear, I’m no stranger to esports.

As a League of Legends writer and analyst by trade, I’ve been around the general industry to know how things are. Having attended events like Conquerors Manila and competed in collegiate tournaments in the past few years, I revel in the energy of competition, the dedication it takes to be at the top and all the hype in-between.

Fighting games however, were a twilight zone for me until recently. I’ve admittedly watched a few streams of The Nationals and the EVO World Championships here and there, but not to the point where I would consider myself an enthusiast. In fighting game community (FGC) terms, you could call me a “stream monster”.

Perplexed was one word I could use to describe myself when I was assigned to be part of Esports INQ’s REV Major coverage team. The opportunity seemed exciting but something didn’t sit well with me. With the rest of my peers much more knowledgeable about fighting games than I was, I’d stick out like a sore thumb.

“You can provide a fresh perspective,” said my editor when asked why I in particular was tasked to go to REV. “Have a fun time, don’t fret too much and just be ready share your experience as a first-timer.”

I shrugged and cleared my calendar for a Sunday that would have otherwise been unremarkable. After all, nothing bad could come out of it — save for having to twice bear the full length of the dreaded Metro Manila commute.

Little did I know that I was about to be taken for an unforgettable ride. 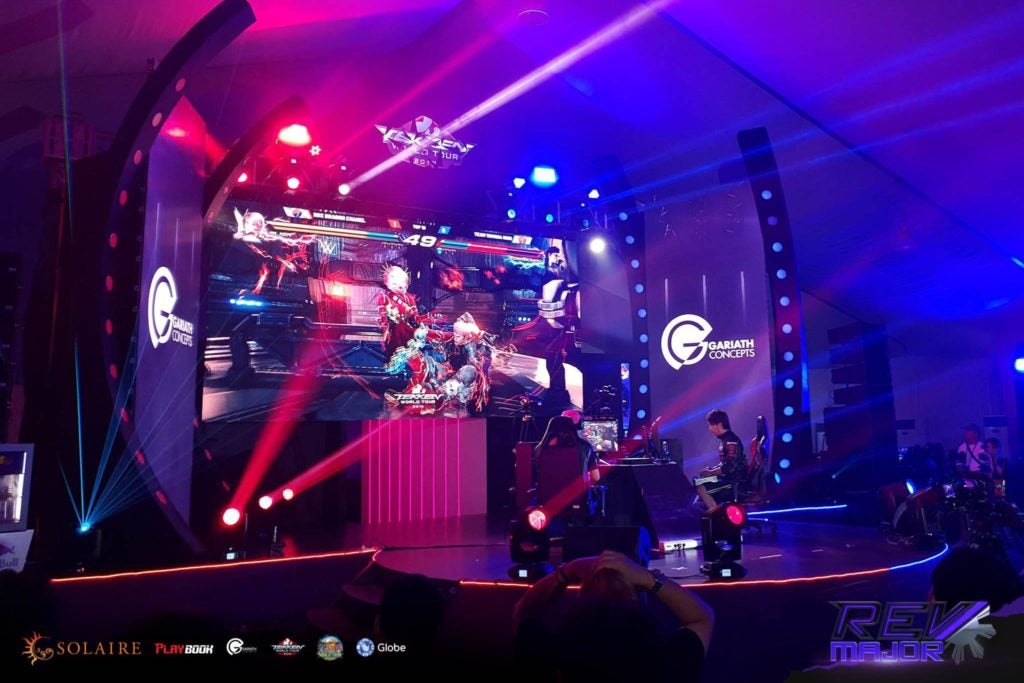 It’s 8AM of Sunday. Coming off my team’s (the Ateneo Loyola Gaming Team) disappointing elimination from the International Esports Festival the previous night, I was excited to move past that and experience what local fighting games were all about — after a two hour bus ride, of course.

It’s 10AM. I was finally at Solaire and ready to take on REV Major. My inaccurate sense of direction had me lost in the sheer grandiose of the resort for a bit. However, the neon lights that greeted me upon arrival to where I was supposed to be made me feel giddy in a way that made the wandering all worth it.

The first thing I observed when I got to The Tent (a giant tent-slash-function-hall that served as the event space) was just how much of a familiar AND different beast REV Major was from other local esports mega events.

Let’s talk about the similarities before anything else. As with any big convention, present were booths for partnered brands, game developers (shoutout to Bayani, the first locally-developed fighter) and free play stations where con-goers could play games from different time periods.

What made REV Major and by extension, other fighting game events, was the interesting symbiotic dichotomy of the competitor and spectator experiences. While events like Rampage (League of Legends) and Manila Masters (Dota 2) typically only have a select few teams participate,  REV Major was an open event. This meant that anyone could play in any of the 12 games present and be a competitor in their own right.

At REV Major, the line between fan and pro was as blurred as it could be.

That player lifting the trophy? They could very well have been the very veteran you lost to yesterday. Or maybe they could be a newcomer who made a miracle run through bracket.

The person you’re sitting right next to? Perhaps they were just one match short of being the one you’re watching on stage right now. Or maybe they’re your friend attending their first tournament, going 0 – 2 in bracket but having the time of their lives.

At other events, it’s easy to feel that you’re just a number to report to sponsors. At REV Major, you’re part of something greater; you are part of the story.

At the center of REV Major was the imposing presence of the champion’s stage in all its multi-LED wall, strobe light and mega speaker glory.

While everyone could compete in the tournament proper, making it onto the main stage on Sunday meant that you were the cream of the crop. It was a prestige reserved for the top four in Super Smash Bros. Ultimate, Marvel vs Capcom 2 and Street Fighter V, as well as top eight in Tekken 7 and Dragonball FighterZ. To be a part of that group, you had to brave through hundreds of other participants — a feat easier said than done.

Every match was a spectacle to behold, in no small part thanks to the electrifying crowd and mic stylings of host Eri Neeman and various commentators. From local legend JRBata’s incredible losers bracket run to win Marvel vs Capcom 2 to Hong Kong’s XIFL almost foiling JJRockets’ reign over Southeast Asian Smash Ultimate, the hype was definitely there. 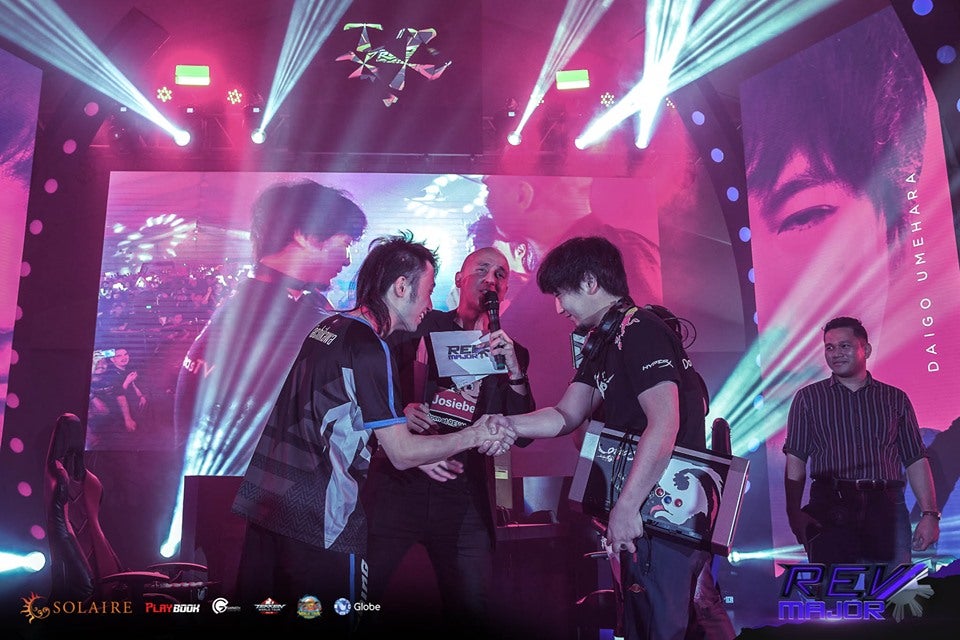 A highlight I likely won’t forget in the near future was the unbelievable appearance of Japanese Street Fighter legend Daigo Umehara. After the lights dimmed out following Tachikawa’s win in the finals of Street Fighter V, Daigo emerged from the drapes to serve as a hidden final boss of-sorts — much to everyone’s delight. And true to his legendary stature, Daigo then went on to sweep Tachikawa.

I almost lost my voice during the scuffle.

After a good half hour of calming down following Daigo’s appearance, I learned that there are players competent in multiple fighting games. Coming from a traditional esports background, I’m used to seeing players exclusive to one title. It’s not everyday that you see a Dota 2 pro competing in League of Legends. At REV Major however, I was surprised to see Tachikawa heading on to the stage once more — this time to compete in Dragonball Fighter Z. Looks like some people are just good at video games.

Of course, who could forget the centerpiece: the Tekken 7 tournament, which was part of the game’s World Tour circuit as a ‘Master Event’. Even at 8PM, a time where many esports fans would already be going home, the tent was packed with eager spectators passionately waiting for the tournament to go underway.

You’d expect that the crowd would be tired after a day of non-stop action, but the atmosphere never faltered once leading up to the moment where UYU’s LowHigh won his back-to-back championship title. After countless rounds of Dragunovs, Shaheens and juggles in between, the ambience in the air just kept amping up and the cheers and the roars of the crowd couldn’t get any louder.

The clutch turnarounds of Team Liquid’s Gen, the heartwarming storyline of Yamasa Nobi and his self-proclaimed Filipino son (who he happened to knock out earlier in pools) and the fandom surrounding Rangchu’s Panda reminded me of why I fell so in love with the world of esports. The passion, the grit, the collective love for video games that unites us all – it’s breathtaking to see and behold in the flesh.

It’s 10PM. As I walked past the golden arches of Solaire, I see faces of exhaustion, content, and unadulterated joy on the fleeting silhouettes of the home-bound con goers. I realize just how long of a way esports in the Philippines has come.

It’s 11PM. I’m on a bus and on my way home — thinking about the long day I’ve had.  I realized how fortunate I was to attend REV Major 2019. From the amazing atmosphere to the high level of competition present, it was such a pleasure to be a part of something this amazing.

It’s 1AM of the next day. I’m on my bed, sweaty, tired and several hundred of pesos more broke thanks to the event’s awesome merch lineup. I realize that I had just spent over 14 hours of my time watching and screaming about video games.

And you know what? I wouldn’t have spent that Sunday any other way.

Read Next
Who Came Out on Top at REV Major 2019
EDITORS' PICK
IATF: Food firms to operate with 50% of workforce during Luzon quarantine
Style and music journeys with Claudia Barretto
UP-PGH wards for COVID-19 patients finished in 5 days
BREAKING: 1,075 people in PH has coronavirus disease – DOH
Cebu City closes its borders
DILG to stranded workers: ‘Stay where you are’ until Luzon-wide quarantine is over
MOST READ
Tootsy Angara bares neighbor wanted them out of village
Ruby mourns 9th fallen COVID-19 front-liner—doctor sister
No more bread? Company forced to limit production
Pacquiao to seek probe on leaked private letter from Barangay Dasmariñas
Don't miss out on the latest news and information.

Tootsy Angara bares neighbor wanted them out of village

Koko Pimentel: Protocols may have changed over time