Well met, travelers! The fieriest four weeks of Hearthstone are upon us – but with a fel-infused twist. Starting June 10, the Felfire Festival brings you the greatest hits of Outland – events, rewards, a huge Battlegrounds update, and a free, five-chapter Trial by Felfire Solo Adventure.

The first headliner of the Felfire Festival brings Pirates to Battlegrounds! Meet 17 new minions and 4 new heroes in this massive update – including a reprise of Patches with a swashbuckling new Hero Power.

Follow the story of Aranna Starseeker in this FREE, five-chapter Solo Adventure as she embarks on a journey of self-exploration, assembles a crew of outcasts and teams up with Illidan and the Demon Hunters to take on the twisted architect of the Rusted Legion: Mecha-Jaraxxus!

Aranna will also be entering the Battlegrounds on June 18 as an early-access Hero for players with Battlegrounds Perks before she officially joins the fray on July 2.

Build a deck and take on some of Outland’s biggest and baddest raid bosses!

The Burndown Tavern Brawl returns! Take control of a random deck, and the loser of each brawl will be given their opponent’s deck for the next one. Which deck will reign supreme?

Rounding out the Felfire Festival lineup is the Rumbledome Tavern Brawl! Choose an Outland henchman from Trial by Felfire, grab a weapon, and battle it out for a spot in Mecha-Jaraxxus’ Rusted Legion. 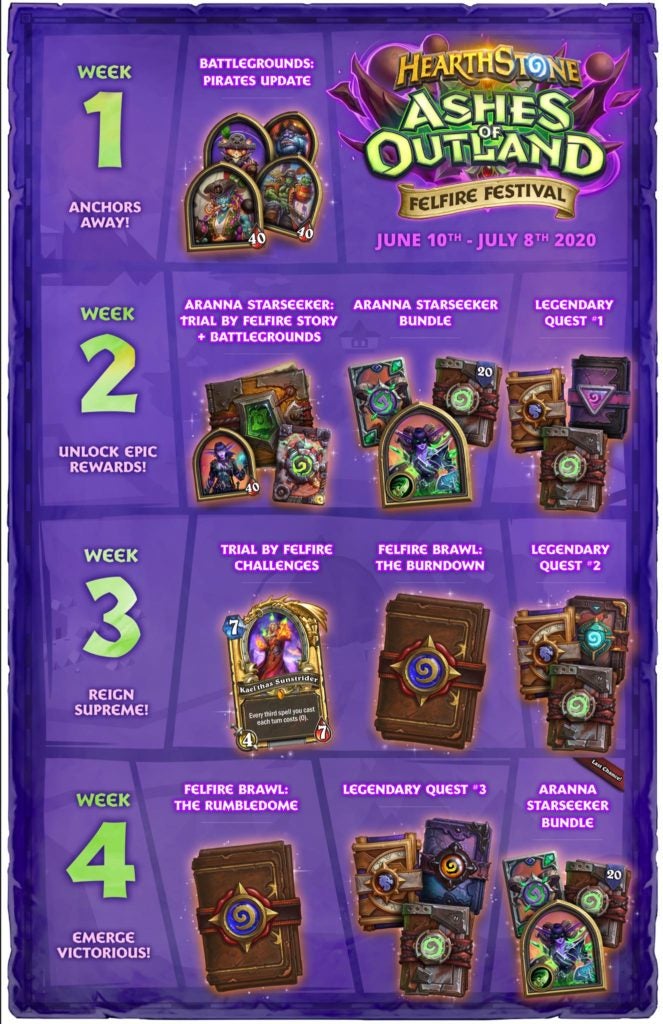 Read Next
Ovilee May Steps Down From LCS Broadcast
EDITORS' PICK
How Filipinos are embracing digital technology amid the coronavirus pandemic
DOH renews appeal to hospitals for more COVID-19 beds
Water remains our saving grace right now
Like death and taxes, ‘elites we will always have with us’ – national scientist
Defend Your Health! Shop health essentials from home with Rose Pharmacy’s Online Sale
Duterte exults: Oligarchy ended without martial law
MOST READ
Duterte sets off fresh tirades vs ABS-CBN after network lost franchise bid
‘Inaccurate’ to liken ABS-CBN franchise denial to ‘dismantling oligarchy’ — Villanueva
Duterte exults: Oligarchy ended without martial law
Military agents shot on the back – DOJ
Don't miss out on the latest news and information.