The second week of Hearthstone’s Felfire Festival brings forth a new solo adventure, Battlegrounds updates, and an alternate hero for the game’s first new class since 2014.

The new five-chapter, free-to-play solo adventure, Trial by Felfire, follows Aranna Starseeker as she takes on the might of Mecha-Jaraxxus and the Rusted Legion with the aid of demon hunter Illidan Stormrage. Completing the adventure presents the player with a Rusted Legion card back.

The Fall of Tempo Demon Hunter?

The new update, however, comes as a double-edged sword for demon hunter enthusiasts.  Twin Slice, a card that has played a huge role in the class’s early game dominance has received a possibly meta-shifting nerf.

The 0 mana, +1 hero power spell has allowed demon hunter to control the board and dictate tempo by removing threats at ease while developing their own board at the same time. The change to Twin Slice‘s mana cost complicates a number of staple DH plays.

Now, neither Stayr Overseer nor Glaivebound Adept can be played on turns 3 and 5 respectively unless the player has a weapon equipped.  Cheap weapons like Umberwing or Aldrachi Warblades will become even more vital keeps at the mulligan. 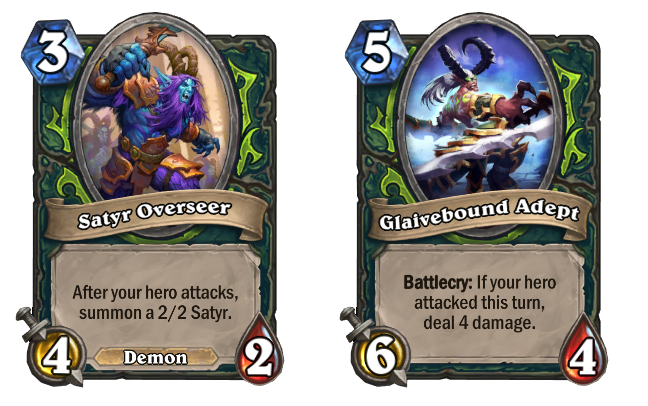 The card’s combo potential with Altruis the Outcast for game-swinging board clears has also been significantly reduced. Players will have to do more careful consideration when planning their Altruis turns, most likely relying on the cost reduction from cards drawn with an outcasted Skull of Guldan. A number of players may be inclined to cut Altruis from their decks altogether.

But these changes won’t discourage the Illidan Stormrage faithful for long. For what it’s worth, it may promote slower, control-type demon hunter decks that will spice up the meta. Highlander Demon Hunter, anyone?

Battlegrounds welcomes a fair number share of changes as well.

In addition to hero and minion changes, a couple of Battlegrounds bugs have been resolved: