Taking the Leap: The Story of Overdrive

This piece was written by RD Rogacion, Founder and CEO of Overdrive Studios.

As I’m writing this down right now, I’ve been stuck in my room for the last three months. This is the very same room I dreamt of being in the esports industry. This is my story.

Childhood and Exposure to Esports

I’ve been a gamer all my life. There wasn’t a day when I wasn’t exposed to video games. The classics, the PlayStations, PC games, even the arcade games inside Sunday school, you name it.

That part of my life had multiple instances that made me want to get into the esports industry. One of which was back in 2013 when we were tasked with shooting a documentary of our choice. 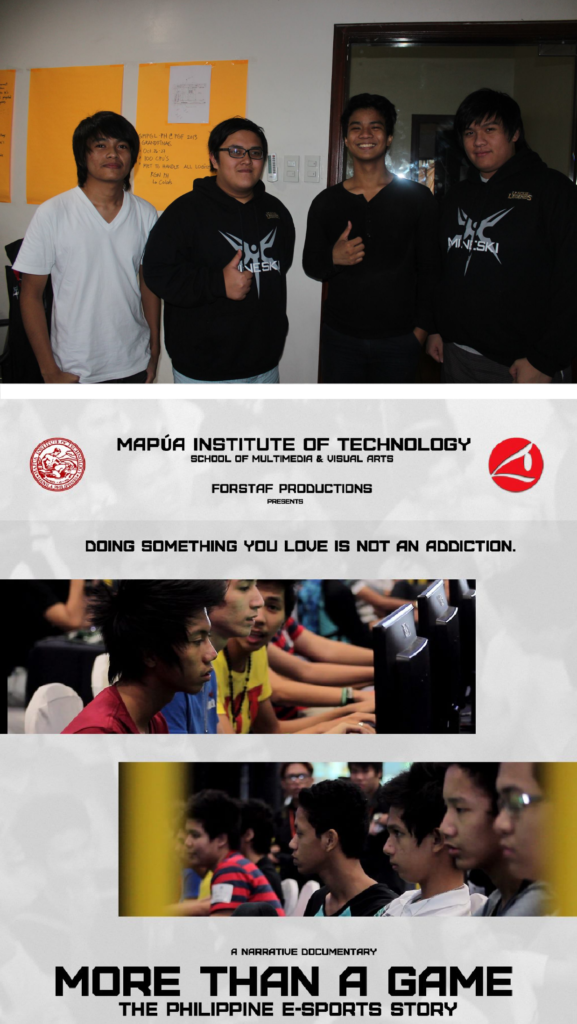 (Top: RD and his groupmates. Bottom: Poster of their Esports Documentary.)

We picked esports, obviously, but we mostly used it as an excuse to play video games during our downtime. Monkey-business aside, we managed to score interviews with legendary Starcraft player Caviar Napoleon “EnDerr” Marquises-Acampado and veteran shoutcaster Marlon “Lon” Marcelo.

The Moment I Wanted In

After finishing college, I got into a corporate job as a Digital Marketer. It was a daily grind where I had no real ownership of my work. I simply slaved away completing task after task with no end in sight. It was soul-draining. Working without a purpose didn’t feel right.

I was still stuck with this job when a certain event changed my life—The Manila Major. 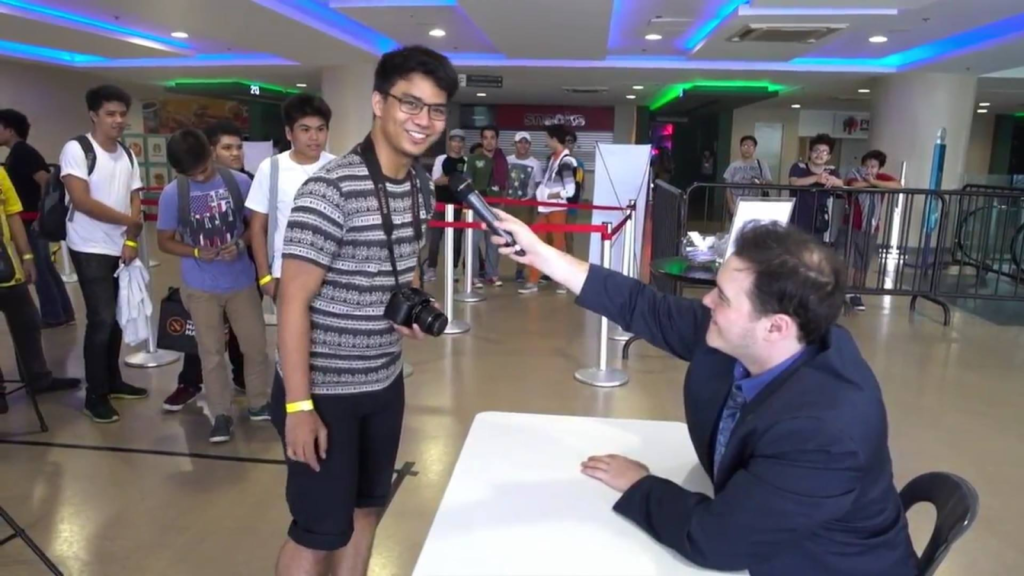 RD with DOTA2 Personality SirActionSlacks at the Manila Major 2016

It was this time, 4 years ago, when I saw people work behind the scenes firsthand. This made my fascination with the entire industry skyrocket. I scrambled to come up with things I could help out with, and that’s where my creative side came in handy.

I got to meet Pao Bago at the event, too. I shared my dream of getting into the scene with him and he gave me words of encouragement in return.

Post-event, I was a digital marketer and a graphic designer by day, a boy chasing his dream by night. I knew I had to use that Major hangover to create something for the industry.

In 2016, I began a freelance graphic design career under a one-man studio named Overdrive, which created graphics catered towards the gaming realm. Looking back, my work was horrible, but people took notice of me. This helped me find the right people and build relationships with a number of clients.

A lot of my work consisted of collaborations with almost no pay, as I was desperate to get my name out there. I continued to juggle studio projects with my corporate job until one fateful day—the day Execration qualified for The International 2016 Wildcards. 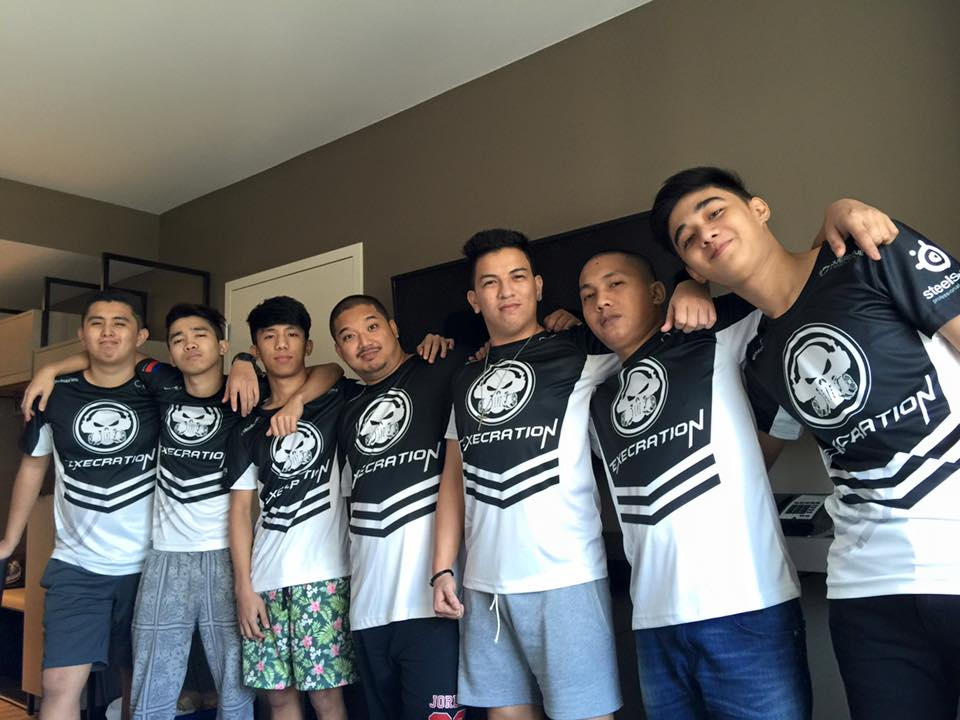 “I have to make this count,” I thought to myself. I immediately messaged the team’s Twitter account and asked if I could design their jerseys for the event. I was directed to Execration management and got to collaborate with their coach for the jersey design.

The story of Overdrive happens simultaneously with my time at Tier One. As I was conceptualizing the logo for Tier One, I was also in the middle of a big Overdrive project for Clutch Gamers, a team that eventually went on a world tour in 2017.

This became a recurring theme throughout my tenure. As my projects increased, the restrictions began to increase as well. It was time to choose. 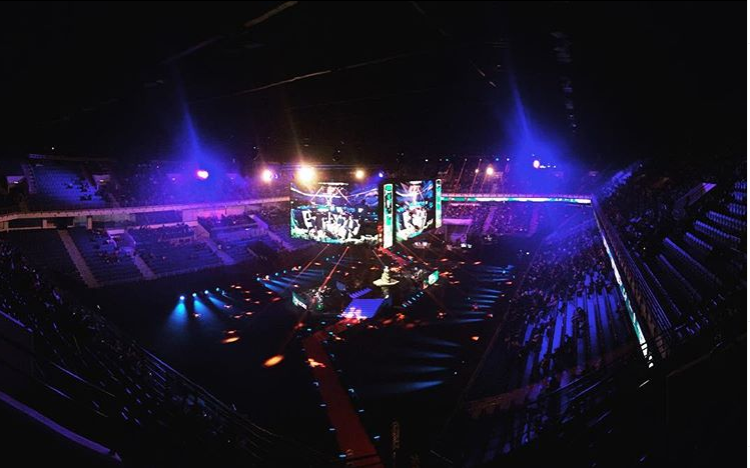 I left Tier One in 2019 after an eventful trip to Malaysia. I took a vacation leave to attend the Kuala Lumpur Major. I met a bunch of people who would eventually become my (now former) business partners. After assessing the kind of reputation I was able to build overseas, I was able to muster up the confidence to go all in. I had to choose myself this time.

I chose my mission.

My Mission, and Overdrive

Having realized I couldn’t change how people perceive design in the industry if I kept working for someone else, going independent was the only option I had. I was set on giving design and branding a bigger voice, and I could only do that if I was the boss of myself.

My mission was clear when the dust settled: I was going to bring the value of design and branding into the esports and gaming space.

How Overdrive evolved over the years

My decision to move forward and start Overdrive as a company wasn’t made alone. There’s one other person who has been there throughout the years: Lars Hernandez.

Lars is arguably the greatest talent and asset among everyone I’ve ever worked with. He learns and picks things up so fast–It’s actually scary. Give him key information and he’ll fill in the gaps, and create a process pipeline immediately. He’s efficient and will be proficient in whatever you throw at him in a week.

I met him when we were in Tier One, and instantly clicked because we both hailed from the south (everyone else in Tier One lived in the north).

We left our dayjobs. We built our own team from scratch. Now we’re here. Happy to share this journey with my brother. RwarglOverdrive StudiosThanks to my team, my partners, our beloved clients, friends and family.#TI9

When I moved on from Tier One, I laid down my plan to him. “I’ll go to Kuala Lumpur for the Major, see what happens, and resign afterward. Then I’ll go get you to join my cause.” That was a promise we made.

I wasn’t surprised when Lars eventually tendered his resignation, citing his decision to join me at Overdrive as one of his primary reasons.

2019 was the official start of Overdrive as a fully functioning business, with several partners based in Kuala Lumpur as part of our initial agreement. We were young and picking things up on the fly, but Lars was laser-focused in making sure everything we did was up to business standards.

By the end of the year, Lars became the only partner I had left, out of the initial five (three Malaysians, two Filipinos). We had to scramble through salvaging client work, fixing damaged reputation, and just trying to survive as a company. At the same time, Lars was doing certain things on top of Overdrive that paved the way for my second local partner’s entrance.

His name was Joe Josue, TGGroup’s Corporate Business Manager. If you don’t know him, you may have heard of his previous companies: The Lightswitch Corporation and Substance—both creative agencies focused on elevating the standards of local creative professionals. He’s responsible for producing and representing creatives as well as managing accounts with multinational companies as his clientele. Overdrive became his first long-term commitment to esports.

That certain thing Lars was working on? That was TGGroup. Lars helped non-endemics enter the esports scene through online broadcasts and activations. (You’ll see a similar pattern throughout the article about the inception of the team, as to why people ended up where they were). 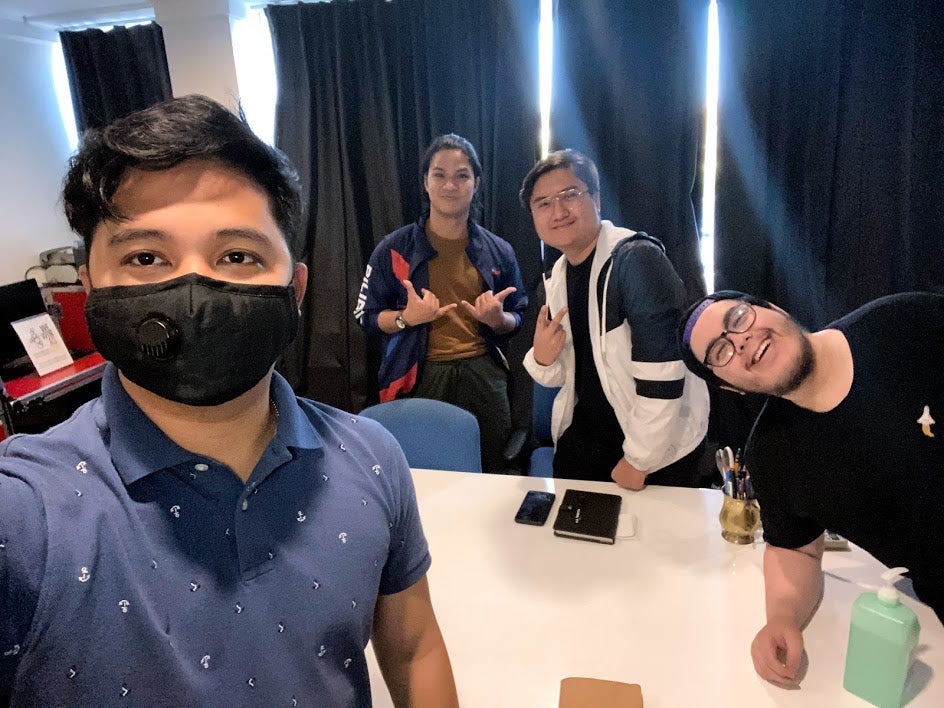 At the start of 2019 we were also able to add two new faces to our roster: Designer slash animator Glenn Alcabaza, a long time friend and younger collaborator of mine; and Kat Pineda, a seasoned editor who’s proven to be quite the multidisciplinary asset.

Whenever I think about the team, I’m reminded of that anime trope wherein everyone you’ve met throughout your life eventually finds a way to come back and lend you a hand – provided you’ve treated them well in the past. I don’t simply see them as coworkers or esports buddies, they’re really good friends I treasure.

I’d say that 2019 was our biggest year by far as a company. We finally became an independent studio and got to work on huge projects like The Nationals and Sibol. Fun fact: my girlfriend actually helped me come up with the Sibol name during an impromptu design thinking activity at a coffee shop. 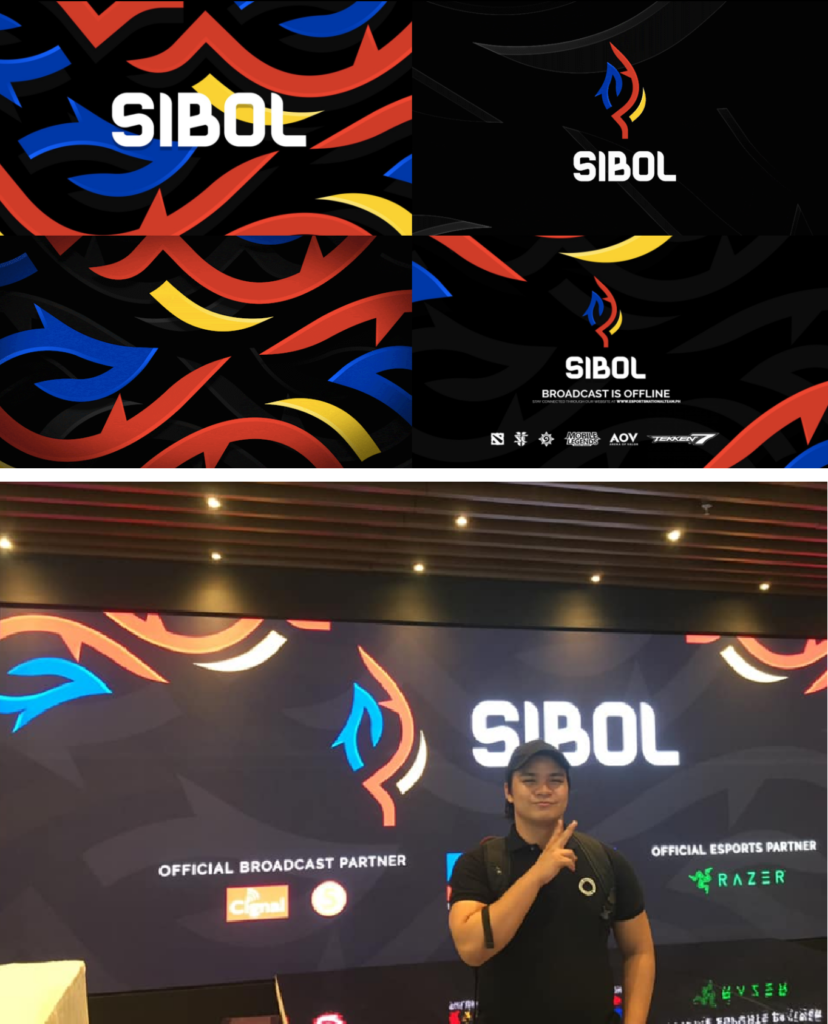 We also managed to establish ourselves as a studio that values clarity, design, and designers along the way. I strongly believe most of our clients come to us for clarity, on top of our good designs.

Some of our projects reached record-breaking numbers, and they were able to sustain us for a long period of time. I don’t think I would’ve reached heights like these if it wasn’t for Overdrive.

The rest of the year was a blur because projects kept coming non-stop. As a young studio, it became a welcome challenge. A challenge I wouldn’t be able to overcome without my amazing team. 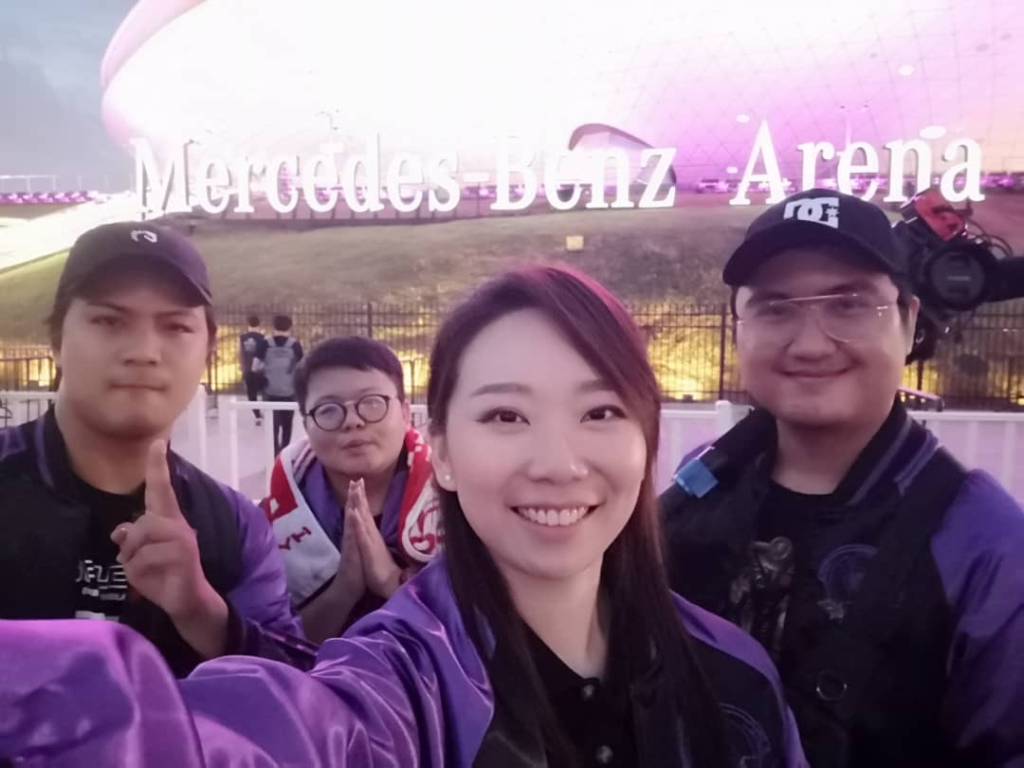 We are one of many companies that are in survival mode because of this pandemic. Luckily for us gamers, making quick decisions and adjusting on the fly runs in our blood.

The studio constantly evolves and we no longer do just Graphic Design; we’ve transitioned into the realm of Video Production, Web Development, Social Media Management, and Apparel Design.

We also began sharing our experiences as a studio in hopes of inspiring and helping other creatives and businesses. Ironically the pandemic has provided us with a lot more time other than our usual client work to dig deep into our business and address our own pain points as well, solving each one as the months go by. We recently put up the first iteration of our website, mainly highlighting our portfolio: Overdrive.gg

We’re looking to expand the team this year and have a lot more plans in the pipeline. We’re keeping things in Overdrive and nothing can stop us.

ABOUT OVERDRIVE
A top Esports Creative Studio in Southeast Asia, working behind the scenes to develop strategy, visual branding and marketing for esports organizations in the region, and occasionally across the world. Our clients include Red Bull, AirAsia, Lenovo, TNC, Tier One, and Sibol, the official esports team of the Philippines.

PBA: Bolick explodes for 44 points as NorthPort rallies past Meralco