The largest and most credible esports companies and personalities in the Philippines have come together under the revamped banner of the Philippine Esports Organization (PeSO). Backed by telecommunications giant, Smart Communications, PEsO is comprised of the most recognizable names in Philippine esports – Bren Esports, Gariath Concepts, Mineski Philippines, The Nationals, PlayBook Esports, Tier One Entertainment, TV5, and TNC Holdings.

PeSO has the distinction of being the sole organization accredited by the International Esports Federation (IESF) since 2012. PeSO’s member organizations had previously worked together under the banner of the Esports National Association of the Philippines (ESNAP) and the Philippine Southeast Asian Games Esports Union (PSEU) for the successful staging of the first ever esports event in the SEA Games held in the Philippines in 2019. The AESF had sanctioned the PSEU to execute the SEA Games esports tournament. The AESF had also signed in March 2020 a landmark agreement with the IESF, wherein the IESF recognizes and acknowledges AESF as the sole federation for esports in Asia, while the AESF recognizes and acknowledges the IESF as the sole international federation for esports. 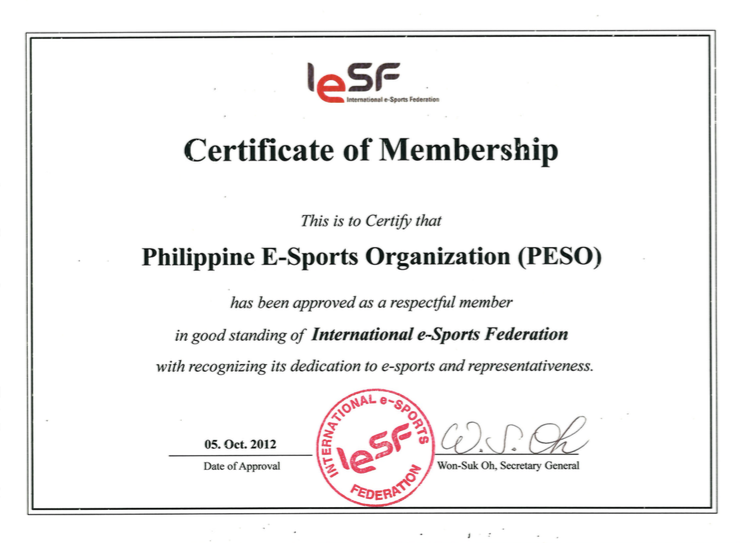 The Philippine E-Sports Organization (PeSO) has been accredited by the International e-Sports since 2012.

PeSO President Mr. Brian Lim with other member countries of the IESF in 2012

In the 2019 SEA Games Esports Tournament, Bren Esports, Gariath Concepts, and TNC worked under the leadership of The Nationals Commissioner Ren Vitug to be the National Technical Officials (NTOs) of the tournament, while Mineski Philippines and TV5 co-produced and streamed the event for all the participating countries. Distinguished individuals from Bren Esports, Mineski Global, PlayBook Esports, and Tier One Entertainment provided the coaching and management staff for Team Sibol, the Philippine National Esports Team. Gariath Concepts managing partner Joebert Yu was also overall competition manager for the tournament.

Member organizations of the Esports National Association of the Philippines (ESNAP) have merged with PeSO for a powerhouse group to elevate Philippine esports.

To kick off this significant milestone, PeSO will be mounting the Philippine Qualifiers for the 12th IESF World Championship to be held in Eliat, Israel in December. This year’s Philippine Qualifiers will be an online format, featuring DOTA2 and Tekken 7. Team Sibol’s Andreij “PBE.Doujin” Albar took him the bronze medal in last year’s IESF World Championships, and PeSO is confident that this time, Team Sibol can match, if not exceed, last year’s contingent’s performance and standing.

“With the support of Smart Communications, there is no doubt that we are in a stronger position to place in this year’s IESF World Championships,” said Brian Lim, president of PeSO. “Smart’s commitment to support and grow esports and the national team, Sibol, is crucial and is definitely appreciated.”

Jane Jimenez Basas, SVP and Head of Consumer Wireless Business at Smart, had this to say about Smart’s support for the esports national team: “Our goal is to continue leading the way to bring glory to Philippine esports. After supporting Team Sibol in the 2019 SEA Games, Smart reaffirms its commitment to the esports industry by looking for the next members of Team Sibol who will represent the Philippines in the IESF World Championships. “

PeSO has also applied for accreditation from the Philippine Olympic Committee to be the official National Sports Association (NSA) for the Philippines, giving it the main responsibility to govern and develop esports nationwide. PeSO’s application for NSA accreditation is bolstered by the unified presence of the biggest and most credible collection of esports stakeholders in the Philippines, who have tirelessly worked towards the industry’s growth and betterment since the early 2000s.

The search for the newest members of Team Sibol starts this September 2020. Details on the Philippine Qualifiers for the 12th IESF World Championship will be announced through the PeSO Facebook Page. TV5 and Cignal, who have been strong advocates of esports on Philippine airwaves, will air the Philippines Qualifiers on One Sports and One Sports Plus.