Philippine Olympic Committee (POC) President Abraham Tolentino has welcomed the Philippine Esports Organization (PESO) as associate member shortly after its proclamation as the official National Sports Association (NSA) for esports on the Philippines.

“I personally welcome the PESO as an Associate Member of the Philippine Olympic Committee after successfully complying with all the requisites for membership and gaining approval from the POC General Assembly last August 29, 2020,” said POC President Mr. Abraham Tolentino in a statement.

“Esports is undoubtedly the current rage with millions of active participants worldwide. And the fact that many Filipino exponents of the game have distinguished themselves as top performers in the sport, gives us reason to feel encouraged and proud,” he added.

Call for unity and support

Tolentino also encouraged all stakeholders of Philippine esports to unite and support PESO as it fulfills its role as the official Nationals Sports Association (NSA) for esports in the Philippines.

“I urge the practitioners of the sport to rally around the PESO NSA in order to forge a united and formidable front in international competitions. I congratulate the men and women behind PESO and exhort them to continue the winning ways that their Team Sibol displayed in the last SEA Games, which they dominated. With the legitimacy afforded by their membership in the International Esports Federation (IESF) and now in the POC, I have no doubt the Philippines can look forward to more stellar performances from Esports in the near future. Mabuhay!” said Tolentino.

Team Sibol, who dominated the 2019 SEA Games Esports Tournament, was comprised of ESNAP players, and supported by ESNAP member organizations. Almost all players fielded by the Philippines in the SEA Games are members of and handled by ESNAP organizations.

ESNAP, as part of the PSEU, provided valuable contributions to Team Sibol, the Philippine National Team for esports. Among the said contributions of PESO member organizations who were then under ESNAP included valuable funding and training for esports athletes who carried our flag. 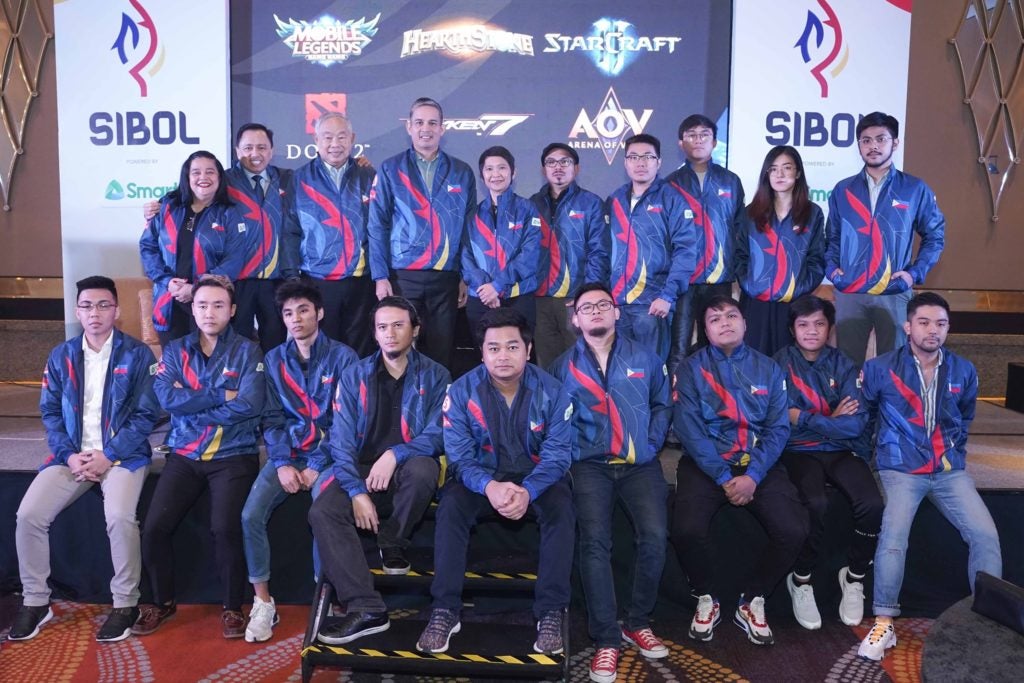 ESNAP members and PSEU Co-Chair Jane Basas (standing, middle) in 2019, during the unveiling of Team Sibol to the media. ESNAP has since merged with PESO to create a unified NSA for Philippine Esports.

“We are grateful to the POC in their recognition of PESO and Esports. This would help us bring in more support to our fellow Filipinos who are competing globally and bringing glory to the Philippines. Together with the IESF and the POC, we are committed to implementing initiatives that truly expand and develop esports in the country,” said Brian Lim, PESO President.

“ESNAP merged with PESO to create a unified NSA for Philippine Esports. With PESO’s member organization’s combined leadership and experience from the SEA Games and their own esports properties and events, alongside the programs of the IESF for global esports development, we are confident that the POC’s conferment of associate member status will result in a remarkable change in the development and elevation of Philippine esports,” said Jane Jimenez Basas, SVP and Head of Consumer Wireless Business at Smart,

Philippine Qualifiers on Sept 18 to 20

TV5 and Cignal, who have been strong advocates of esports on Philippine airwaves, will air the Philippines Qualifiers on One Sports and One Sports Plus. Smart Communications is a proud sponsor of Team Sibol, the Philippine National Esports Team.

For more info on the Philippine Esports Organization (PESO) and the Philippine Qualifiers, visit the official Facebook Page at https://www.fb.com/philesports.

Biden to Trump: ‘Will you shut up, man!’

Biden to Trump: ‘Will you shut up, man!’