KuyaNic Calls Out Tier One for Unsettled Contract

In a now-deleted Facebook post, WomboXCombo founder Nico “KuyaNic” Nazario called out esports talent agency Tier One Entertainment for an unsettled contract that dates back at least two years ago.

“You guys are doing great based on what we’re seeing [it’s the] same din on our side we’re managing well so I think perfect timing to settle things out,” said KuyaNic in a Facebook status yesterday.

He explained that he was inclined to post publicly because internal talks were not able to address the issue. 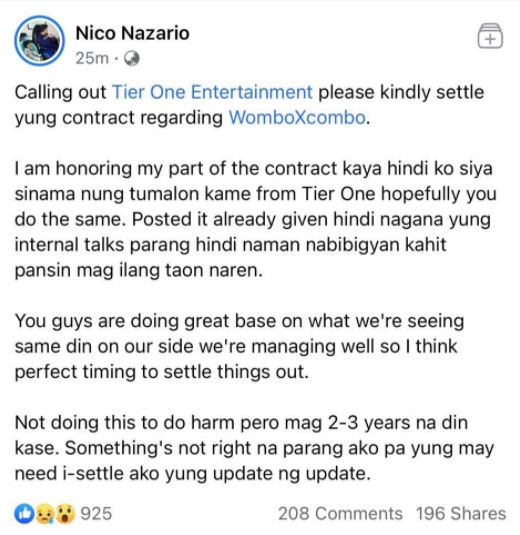 KuyaNic clarifies that he has no intention of harming Tier One in any way, he just believes it isn’t right that for the past few years he has had to continuously ask for updates.

Shortly after the post was published, Tier One Chief Creative Officer Alodia Gosiengfiao commented, “First time I’ve heard of this. They never mentioned this to me. Will raise it up with them.”

Tier One and Alodia have been asked for a statement but are yet to respond. KuyaNic has refused to further comment on the matter.

This is a developing story. This article will be updated as soon as more information becomes available.