The 77th Director of the Wangsheng Funeral Parlor has come to haunt the land of Teyvat.

If you ended up pulling the Walnut, then congratulations! But now, you must be wondering how to build her with all the artifacts, weapons, and characters for you to use. So, we rounded it up for the #F2Ps and made a guide on Director Hu using the debated 3-star polearm, the White Tassel.

For our damage comparisons, we will have to make a few assumptions. First, we assume that Hu Tao will be Level 90 at Ascension 6 with Level 6 on all her talents. Then, we assume that Hu Tao has her power-ups activated which include the following: Guide to Life which increases her attack by a percentage of her hit points and Flutter By which increases her Pyro DMG bonus by 33% .

For her artifacts, we will be equipping her with a 4-piece Crimson Witch of Flames with an HP% Sands of Eon, Pyro DMG Bonus Goblet of Eonothem, and a Critical Rate or Critical Damage Circlet of Logos depending on the weapon secondary stat. Lastly, we will be placing Hu Tao’s critical rate to critical damage ratio at 1:2 for optimum damage output at 75%:150%.

Disclaimer: Although we recognize that the weapon secondary stat can drastically change per weapon, we have to assume equal stat lines for the damage comparison. Ultimately, your damage output will fluctuate based on how much critical rate you have per critical damage.

Me and My White Tassel Against The World

Before we begin, we have to discuss exactly how this build works in the first place. To start, White Tassel is a 3-star polearm and simply cannot compare to her ideal weapon, Staff of Homa. But, compared to the rest of the 4-stars, White Tassel can definitely match or at least get close to the damage per second (DPS) of the likes of Dragon’s Bane, Blackcliff Pole, and Deathmatch. 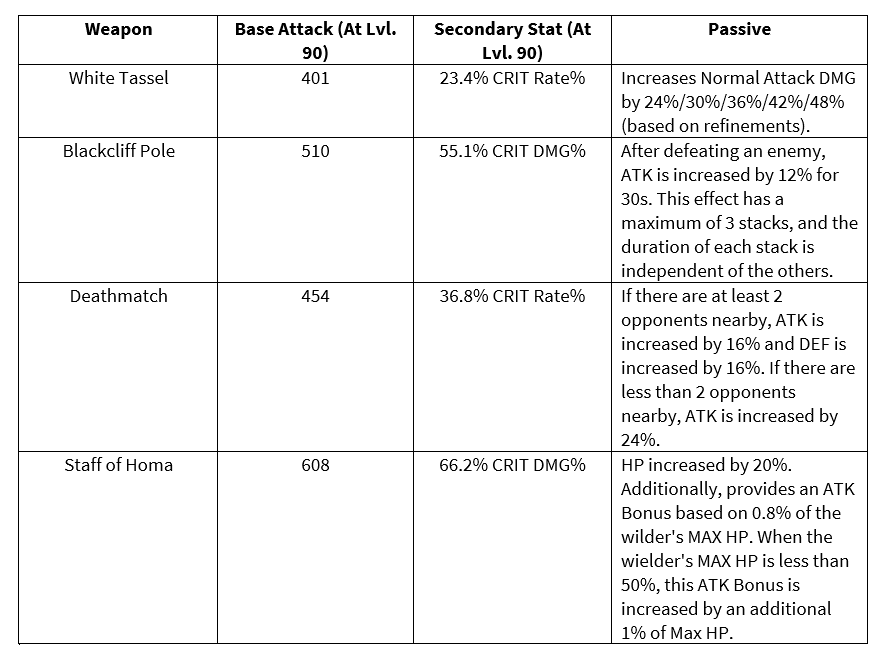 So first of all, why does White Tassel work so well despite being a 3-star polearm? You see, Hutao scales well with hitpoints. Her bread-and-butter ability Guide to Afterlife has the passive Paramita Papilio. Paramita Papilio increases Hu Tao’s ATK based on her Max HP which bodes well seeing her high Base HP at 15,552 at Level 90. But, the catch is the ATK Bonus gained cannot exceed 400% of Hu Tao’s Base ATK.

Therefore, that means higher base attack weapons would simply be better right? At Level 6, Guide to Afterlife has a 5.06% Max HP to ATK bonus conversion. So, for a weapon such as Blackcliff Pole, you would have a base attack of 616 (510 from weapon, 106 from ascension). That means, you can gain up to 2464 attack from Paramita Papilio. In order to gain that full bonus, you would need around 48,696 HP. But, with an HP% Sands of Eon, you only have around 27,579 HP. So even if you had a weapon like White Tassel with a lower attack stat, you would still need around 40,000 HP to make full use of its attack.

Thus, the weapon’s secondary stat and passive become the primary factors to look at when choosing your weapon. Why we think White Tassel is good is because it has a Crit Rate% secondary stat with a great passive that synergizes well with Hu Tao. The 23.4% critical rate makes building Hu Tao way easier and with a fully refined White Tassel, your normal attacks will be dealing 48% more damage. 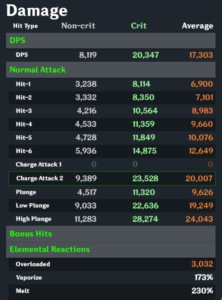 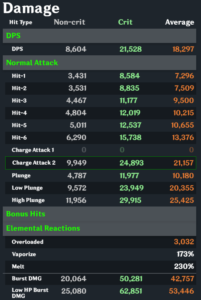 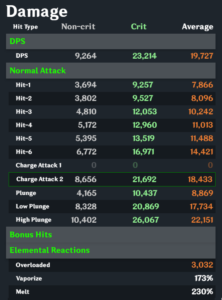 From left to right, the DPS of Deathmatch, Blackcliff Pole, and White Tassel.

Now, there will be those who argue that Deathmatch gives 36.8% CRIT Rate%. But as the numbers will show, Hu Tao’s DPS still can keep up with Deathmatch and even surpass it in particular scenarios. Deathmatch and Blackcliff Pole’s passives (that increase one’s attack) are alright on their own, but White Tassel’s passive can be useful for increasing your damage over time. Furthermore, the latter weapons’ passive can be unreliable to proc since it depends if you’re facing a mob or a single target.

The calculations were done on Genshin Impact Calculator set against a Level 90 opponent with 10% elemental resistance and is affected by Cryo to allow Hu Tao to proc melt.

The Blunt End of White Tassel 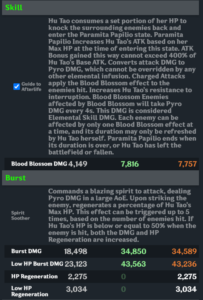 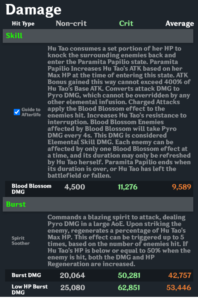 Increasing from left to right, the Skill and Burst Damage of White Tassel, Deathmatch and Blackcliff Pole

But isn’t Hu Tao supposed to do Charged Attacks making White Tassel’s passive useless? At Constellation 0, you don’t have the passive that allows Hu Tao to bypass the stamina limit imposed by doing charged attack upon charged attack. As such, weaving in normal attacks while waiting for your stamina to regenerate will be optimal to increase your DPS.

Although, one key weakness of White Tassel is your burst damage since its added damage to normal attacks doesn’t apply to her Spirit Soother (as seen above). Furthermore, you need to have White Tassel at max refinement (R5) to make sure it’s worth the investment to get to Level 90. So far, you can only get White Tassels from Exquisite Chests and above. 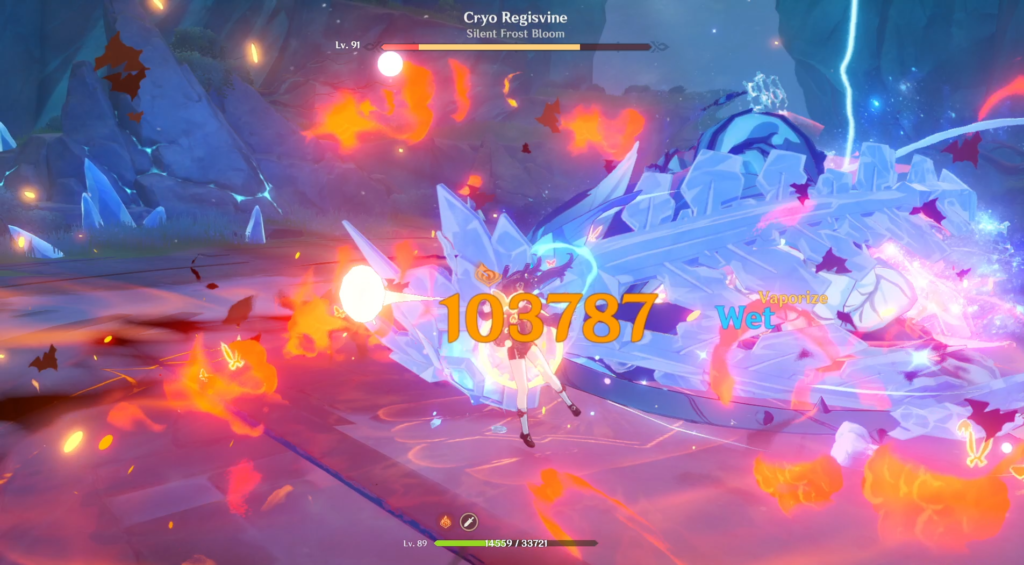 Hu Tao’s Spirit Soother with power-ups but no food and potions.

Don’t trust the numbers? See it for yourself in action. Here’s a player called Audentes in the Asia server who set up his constellation-less Hu Tao to burst down the Cryo Regisvine at World Level 6, AR 54. He made use of Mona, Bennett with a Favonius Sword, Sucrose with Viridiscent Venerer, and is equipped with Lavawalker which means his build still has room to improve for increasing his melt/vaporize damage. His Hu Tao hovers around 75% CRIT Rate%, 150% CRIT DMG%, and 3100 ATK with Paramita Papilio activated.

Still don’t trust us?! Oh well, if anyone could convince you, it’ll be the dedicated players from r/Hutao_Mains who theorycrafted Hu Tao’s optimal weapons. In their document, they listed that White Tassel just lags around 1000-2000 DPS against Deathmatch, Lithic Spear, and Blackcliff Pole in optimal scenarios. 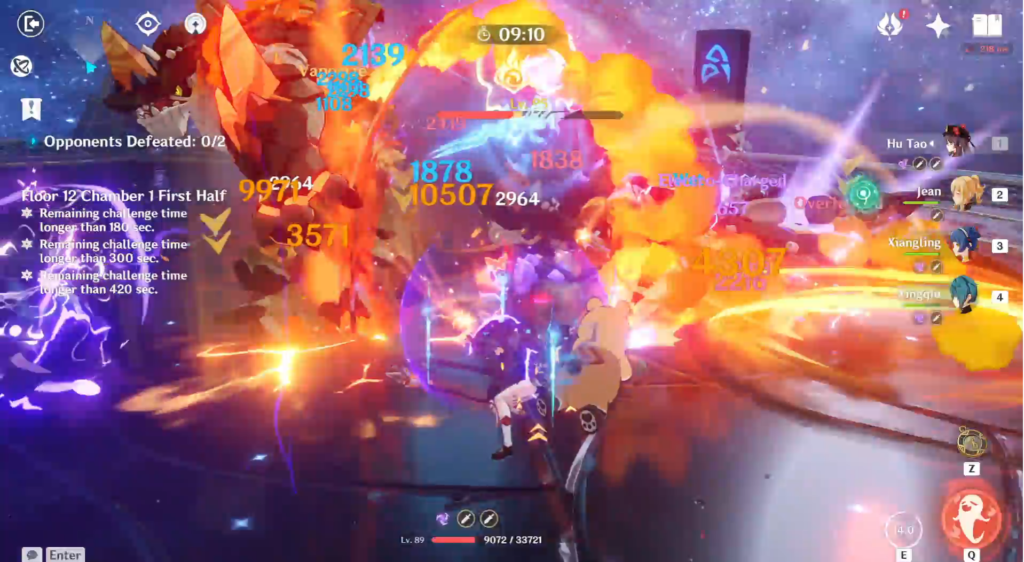 Despite its looks, the White Tassel can pack quite the hits against bosses and mobs alike making her one of the top carries in Teyvat as of right now. She’ll send all those who oppose her to their early grave even with a White Tassel on her side. Since Blackcliff Pole costs Masterless Starglitter and Deathmatch is only obtainable through the Gnostic Hymn, we believe that the White Tassel is hands down one of the best free-to-play choices for Hu Tao right now.

Seeing how viable a 3-star polearm is on Hu Tao gives me hope for the build possibilities that could open up should we put in the time to limit test and experiment with our characters. At the end of the day, this guide was made for players who enjoy Hu Tao and want to build her with the best free-to-play weapon of choice. So if you’ve got the tassels to build, try it out for yourself and see how impressive its damage can be!

Sotto to ICC: ‘What about drug groups killings in Mexico, other South American countries?