The second day of the Southeast Asian qualifiers  burned white hot as the tournament went down to its final six! 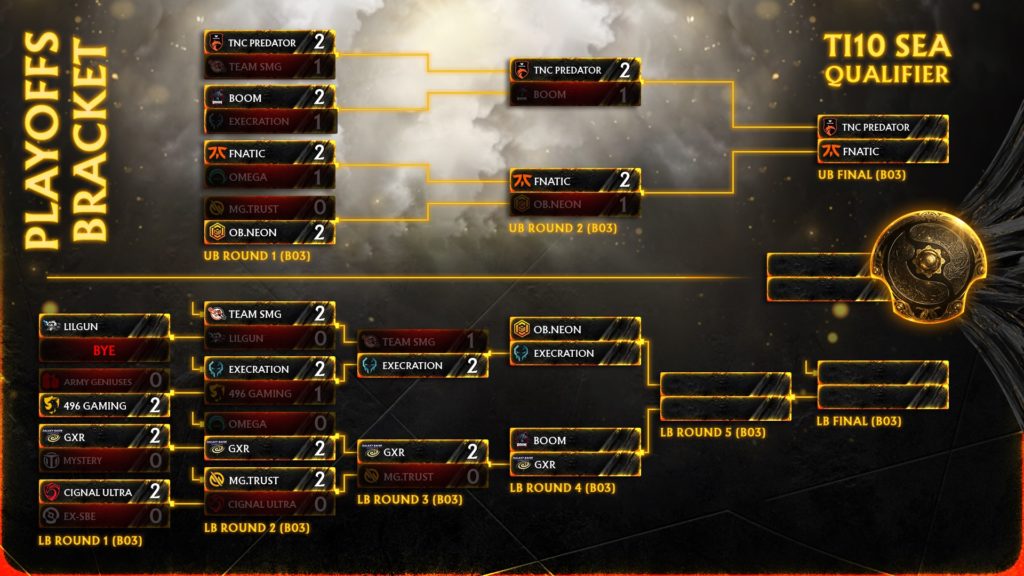 Here are the final six teams hoping to claim the last ticket for the region to The International.

This newly reformed team came prepared and defeated OB.Neon 2-1 in the second round of the upper bracket. Fnatic had their drafts focused on picking a late game carry which would smash the early game prowess of OB.Neon. This strategy worked for the most part, except in the second game where OB. Neon’s Nature Prophet dominated the game with its lane-plowing capability.

In the end, Fnatic proved that the team who has a better carry wins the series

Persistence is the best word that can describe this Filipino team,. Execration started the second day with its match against 496 gaming in the Lower Bracket. After barely winning the series 2-1, they needed to play one more game against Team SMG. They came up victorious in another three-game series.

Execration will face OB.Neon next in a best-of-three series, with the momentum they have the fans will witness a good fight between the both Filipino teams

The team started its second day with a loss against Fnatic. After crushing Motivade Trust Gaming (MTG) 2-0 in the Upper Bracket Round 1, OB.Neon came up short against their former stand-in teammate Yang “Deth” Wu Heng (current offlaner of Fnatic) who showed big plays on Bloodseeker and Legion Commander to help Fnatic go up onto the Upper Bracket Finals.

The dark horse of this tournament, Galaxy Racer managed to rise into top 6 after dominating the lower bracket. This underdog team managed to win a 100-minute game against MTG in game 2 to throw them off the cliff and secure their top sixth berth.

The team will face Indonesia’s Boom Esports for the rights to ascend in the Lower Bracket Finals.

One of the fan-favorite teams because of their solid form, Boom lost to the Ppowerhouse team TNC Predator in a crazy comeback battle 2-1. The all-Indonesian team known for its meticulous playstyle has its defense shattered by TNC”s aggressive plays around the map. They look to bounce back and keep their TI hopes alive against a tenacious Galaxy Racer side.

The team that featured in the last series of the day, and the team who got the last laugh of the day.  TNC Predator reverse-swept Boom Esports after losing the Game 1 of the series. Kim “Gabbi” Villafuerte finished the game off for TNC with his late-game Spectre which destroyed the physical damage build Templar Assassin of Boom Esports in Game 3.

With this win the team advanced to the Upper Bracket Finals facing Fnatic for a chance to gain the first championship berth in the qualifiers.