Dubbed as one of the best video game adaptations to television ever, Arcane asks for, and deserves, your full attention.

There have been other video game adaptations before, such as Dota: Dragon’s Blood and The Witcher, but they seem to never really hit the mark. Dragon’s Blood felt too serving to its fanbase and was difficult to get into for non-players, and while The Witcher is a great adaptation in its own right, it did not push boundaries and ended up a generic show of its genre. Arcane suffers from neither of these problems.

Most people have at least heard of League of Legends at this point, either as players, fans, or from friends telling them to stay away from it like it was radioactive. But whether you are familiar with League of Legends or not, Arcane will definitely catch your eye. With an art style often compared to Spider-Man: Into The Spiderverse combined with music scores that enhance the scene, every episode is guaranteed to be exciting. Most of the time, Arcane chooses to show, not tell.  Part of the enjoyment comes from searching the detailed environment for plot hints, making it a “Where’s Waldo” of sorts.

– SPOILERS BEYOND THIS POINT – 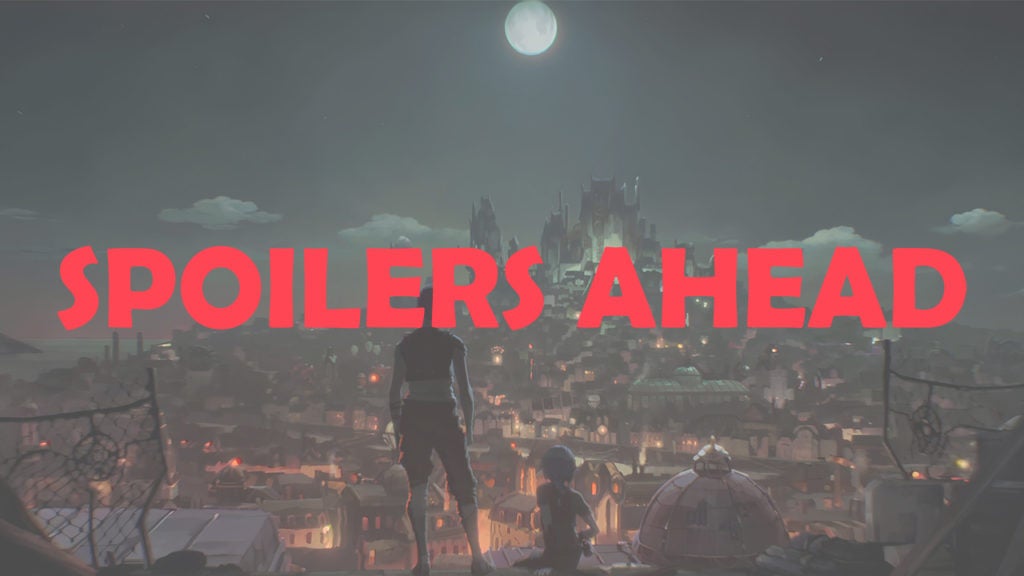 The relationships between the characters made sense, and every decision made by each was rational and made sense given their circumstances. None felt like they were forced and only for the sake of plot progression.

Zooming out, the characters also felt well- planned. The first time we see Ekko, he is working with a clock inside Benzo’s shop. After the timeskip, he is shown with a stopwatch most of the time —  a foreshadowing to Ekko’s journey to being The Boy Who Shattered Time. Silco, who started as a cookie-cutter villain even developed to be something akin to a paternal figure, later understands the decisions that Vander made to protect Vi. Powder’s tinkering with her gadgets were mostly failures, and the genuine happiness and childlike ignorance the first time her gadget worked is perfectly displayed in this scene.

If you’re planning to re-watch the series, here’s a tip: Pay more attention to every character’s eyes. A conscious decision by the production team of the series was to use eye colors to denote a character’s development.

Arcane is standalone, the characters and setting are introduced in such a way that even those who are new to anything League of Legends-related will still appreciate them. Since Arcane takes place years before the League timeline, the show has to build up the characters from scratch, working backwards from the champions that players are familiar with, like Jinx and Vi.

The only “bonus” I got from being familiar with the League of Legends universe is extra enjoyment from finding little references to the game scattered all across the show. For example, here’s Liandry’s Torment and the now-removed item Remnant of the Ancients, sitting on a shelf inside Benzo’s.

For players already familiar with Viktor’s final form such as I am, the excitement of watching him get to that point is still engaging.

Powder’s slow transition into Jinx was also portrayed masterfully, one that would satisfy both players and not alike.

The pacing of the episodes and the series’ release schedule makes it feel like a movie trilogy rather than a nine-episode series. This being said, every episode is consistent with a pattern that might make it predictable, but will still keep your attention nonetheless.

Time skips are nothing new in shows, but the way that Arcane executed it felt immaculate. Sometimes, time skips tend to feel “empty.” Arcane’s main characters experienced genuine growth during this skip, and the series shows this. Not a word needed to be said for Ekko’s time with the Firelights, Powder’s time with Silco, and Vi’s regret over leaving her sister to be apparent to me.

According to League of Legends Lore, the discord between Piltover and Zaun was the result of the Sungates, which was never mentioned or even called back to on Arcane. In a short interaction between Heimerdinger and Jayce, they were looking up to a statue of a man named Stanwick Padiddly. In Arcane, he was a “founding father” of Piltover, and Heimerdinger’s way of speech indicated that Stanwick Padiddly had already passed away. In the known lore, Padiddly is a Zaunite scientist, who took credit for a certain creation by Viktor.

Staying loyal to the known lore, there was a glimpse of the War between Noxus and Ionia, as shown in the flashback that Mel had in Act 3. The final glance we get of Singed and a werewolf-like creature hanging in his laboratory also seem to be accurate to the known backstories between both Singed and Warwick.

Aside from the main characters, the appearance of other champions were also teased. Warwick will definitely appear in Season 2, teased by the howl barely audible in the final seconds of the announcement for the second season. There is also a good chance that both Blitzcrank and Orianna will make their entrance next season. Ekko’s Zero Drive is in the process of being developed as of the end of Act 3, denoted by his discussion with Heimerdinger and the stopwatch in the foreground.

Arcane is 100% worth the time, and it will reward your attention with enjoyment. This series is a great way to open up the world of Runeterra to a wider audience. Arcane is how you adapt a video game onto the big screen. However, don’t let Arcane lure you into playing League of Legends, its toxicity is comparable to Zaun’s.

If elected VP, Sara Duterte will push for mandatory military service for all Filipinos

Help pours in for octogenarian jailed for ‘stealing’ mangoes in Pangasinan