SIBOL Free Fire Team 1 (God Ascends) and Team 2 (Rise Esports) finished in the bottom half of the standings on Day 1 of the Free Fire competition at the 31st SEA Games in Hanoi, Vietnam. 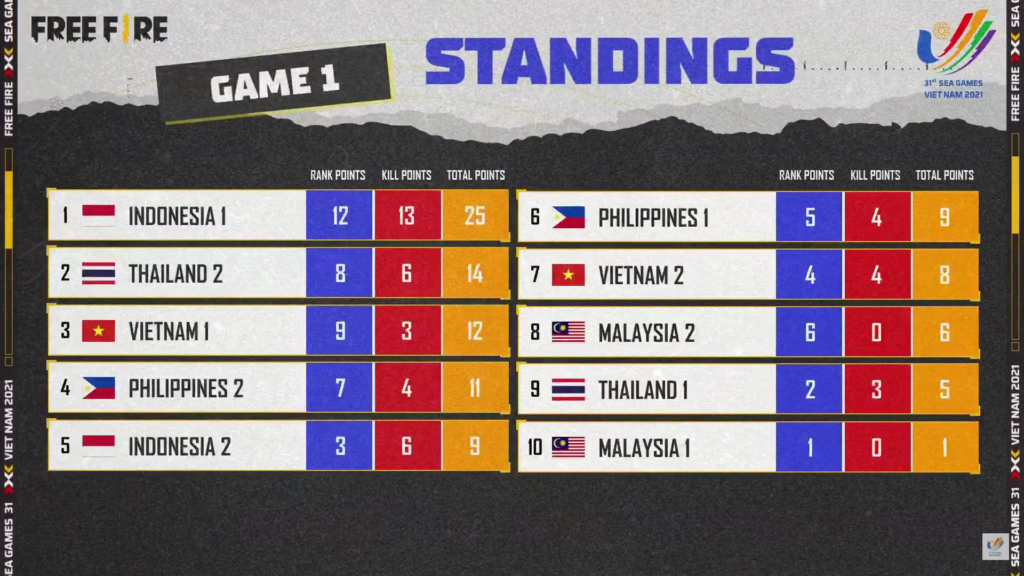 The first matchday started off with seven arduous rounds of battle royale, with teams competing for points from kills and placement finishes. The competition highlighted different maps which cycled from Bermuda to Kalahari to Purgatory, with the final map chosen at random (which turned out to be Kalahari).

The day initially started well for the SIBOL representatives as SIBOL Free Fire Team 2 finished the first round in fourth place with 11 total points and 4 kills while Team 1 finished sixth with 9 total points and 4 kills. The two teams skirmished at one point when the ring got smaller. VOIDFACE also managed to secure an off-cam triple kill during that same round.

However, that would be their only good performance for some time as both teams eventually regressed in the standing in the succeeding rounds. A combination of early-round eliminations and low kill counts pushed both of the teams’ standings to the bottom of the pack.

Luckily, both teams had a resurgence during the last round of the day as Team 2 clinched a second-place finish with Team 1 trailing behind them in third. With the points they got from Round 7, they quickly rose up the rankings as Team 2 is currently ranked 7 overall while Team 1 hovered at ninth place.

All hope is not lost for both of our Free Fire representatives as the action will resume on May 15 for a chance to boost themselves up on the standings through the final seven rounds.

Leni: Campaign ends but not the movement