Terrorblade artwork in the featured photo is credited to: https://imgur.com/qK0buqc

Tour 3 of the 2021/2022 SEA Dota Pro Circuit (DPC) is well underway, and thus begins the last stretch of DPC games before the LCQ for The International 11 starts. Today, we’ll be looking at one of the exciting matches from last week, June 22 — T1 vs. SMG. T1 picked Terrorblade for Kim “Gabbi” Villafuerte Santos’ in all three games. He started out weakly in the first game but later went on to dominate the next two games to help T1 complete the comeback win. 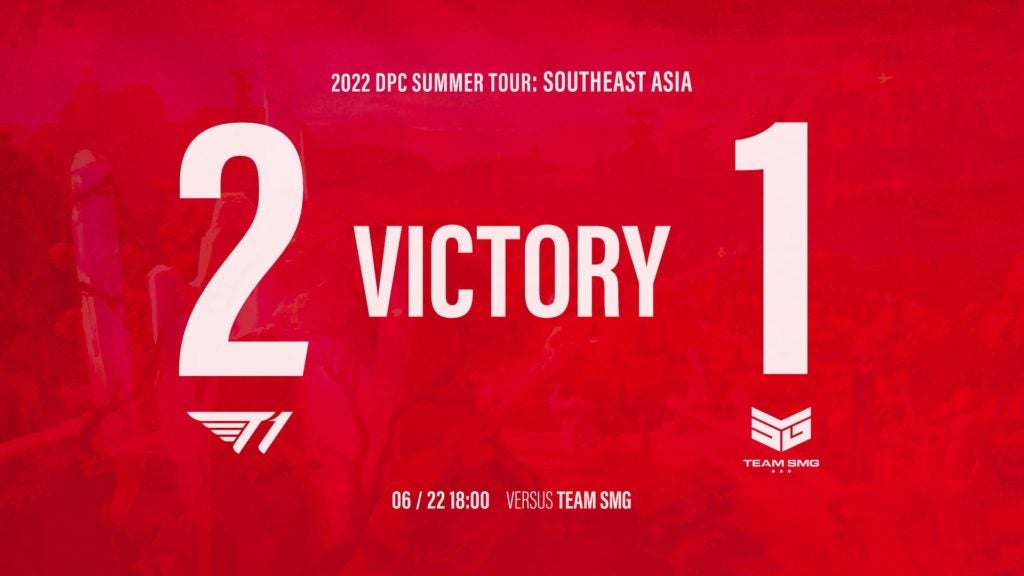 Game 1 started with T1 picking a Terrorblade in the second phase of the drafting period while SMG went for a more aggressive early game line-up. An interesting Keeper of the Light pick for Kam Boon “MoooN” Seng in the middle lane was matched up against Karl Matthew “Karl” Baldovino’s signature Puck.

SMG started the first game with an early four-man first blood on Gabbi’s Terrorblade in the botlane. Ryan Jay “Raging Potato” Qui’s Razor then proceeded to constantly harass Gabbi to make his life a living hell, slowing down T1’s win condition timing. Matthew “Whitemon” Filemon’s Marci tried to stem the blood flow by counter-poking and counter-engaging on the enemy offlaner to little effect.

T1 was unable to properly react to the kill pressure of SMG, causing their towers to fall early on in the game. SMG managed to take down bottom barracks around the 20-minute mark, and after a few skirmishes and a Roshan takedown, went on to secure first blood in the series. It didn’t look like a good Terrorblade game at all.

Taking to the skies

Game 2 told a different story, with Gabbi again running Terrorblade in the bottom lane for T1. This game was slower-paced, with both teams lying on the edge of their seats and being more careful with their engages. The slower game pace turned out to be beneficial for Gabbi as it allowed him more space to farm out his items and hit his timing.

Despite the slower pace, though, Yeik Nai “MidOne” Zheng’s Monkey King in the Dire side safelane had quite the early farm advantage, picking up his Battlefury at an earlier than expected. With the help of a sizable net worth, however, Gabbi’s Terrorblade managed to carryT1 in the middle and late game, negating the impact and pressure of an early-farmed Monkey King.

With T1 snowballing into the late game, and Gabbi’s Terrorblade being nearly unstoppable, T1 took game 2 to equalize the series.

Blowing out the opposition

T1 once again led with Gabbi’s Terrorblade coming into game 3, with the rest of the composition focused on creating space for Terrorblade to farm safely and scale well into the middle to late game. SMG, on the other hand, focused on a more engage-heavy line-up that was set on minimizing Gabbi’s safe space to farm.

Game 3 was another slow-paced game with T1 waiting on Gabbi’s item timing. MidOne didn’t enjoy the same farm liberty as the previous game thanks to Carlo “Kuku” Palad’s presence and pressure in the top lane, forcing him to play cautiously and safely throughout the laning phase. This wasn’t something you would normally do as a safelane Ember Spirit.

A huge team fight in the Dire side’s Outpost unsurprisingly went in T1’s favor, wiping out most of SMG and leaving T1 with a 9,000 gold lead and a topside barracks takedown. This caused T1 to confidently take the momentum, and easily wiping out SMG in another team fight held in the Dire side jungle. This final skirmish wipes two of SMG’s cores and left them helpless against T1’s pushing prowess, ending the series in an astounding win. As of this result, T1 stands 5th in the SEA DPC placements with a record of 2-1, while SMG sits in 6th place with a record of 1-3.

T1, unfortunately, had no comment regarding the consecutive Terrorblade picks in the post-match interview, but one could assume that this was to separate SMG and disrupt their early team fight-focused playstyle. With Terrorblade in the safe lane, SMG was forced to constantly gank and keep pressuring vision on the enemy safelaner, leaving middle and offlane to scale safely into their items. Once that happens, Terrorblade is given space by middle and offlane making plays on their side of the map, allowing Gabbi to pick up his items and be the unstoppable terror that he is.