As one of the more consistent teams to make playoffs at international LANs (choking tendencies aside), one can safely say that South Korean team DRX holds a certain degree of influence in VALORANT. Considered the godfather of APAC VALORANT, DRX’s creative take on Riot’s FPS darling has led several teams to copy their strategies. In fact, even Paper Rex’s coach Alex “alecks” Salle admits copying DRX’s strategies on Andi Andana “Sleepy” Bangsawan’s Check Your Corners podcast.

With that said, it’s a no-brainer for sponsors to see DRX as a good investment—in fact, the organization does enjoy a fair amount of brand deals. With that said, wouldn’t it be every sponsor’s dream for a player to show some love for their product in VALORANT’s biggest tournament of the year?  That’s exactly what Kim “stax” Gu-taek did.

DRX’s first game in the playoffs against FunPlus Phoenix (FPX) was nothing short of a thriller. It had it all. A 6-0 lead by DRX at the start, FPX forcing overtime, and multiple clutch plays from both sides during the six overtimes that culminated in a 19-17 win for DRX.

After that Game 1 win, you’d know that the players will be in an uproar and celebrating from that exhausting game (save for FPX and their fans). And you know what Stax did? He kissed his mouse in celebration.

So what was Stax’s mouse? Turns out it was a Razer DeathAdder V3 Pro, or DAV3 for short. Stax confirmed this via a tweet shortly after.

Obviously, Razer was ecstatic about this and immediately rode the hype train and tweeted about their mouse.

IT'S DAV3!
A SMALL MOUSE WITH KNOBS
IT BRINGS THE JUICE (it brings the juice)
I CAN'T IMAGINE A MORE BEAUTIFUL THING (woo)

IT'S DAV3!
I CAN TELL YOU ALL ABOUT IT
I MEAN, LOOK AT THIS THING
WHEN TRIED BY STAX, EVERYTHING CHANGED!@YinsuCollins pic.twitter.com/JlRboteTOq

And according to Razer’s Sr. Global Esports Lead Khang Thai, DAV3 became the talk of the town in Korean forums. 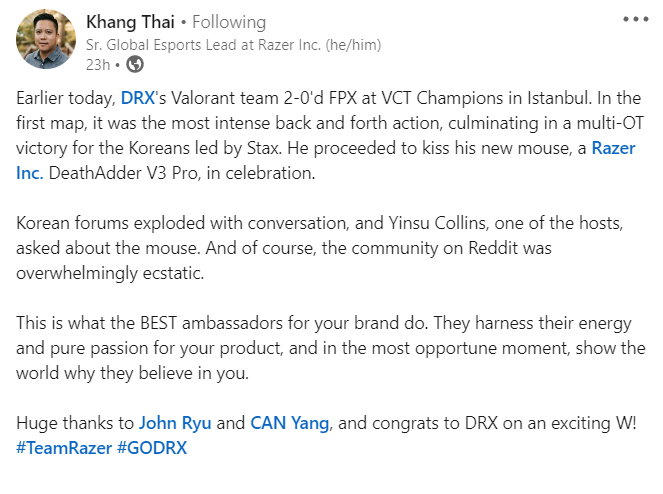 With that said, an influx of VALORANT personalities and pro players expressed their desire to buy a DAV3 for themselves.

stax is a dream player for sponsors.

can only imagine how many DeathAdder V3 Pros got sold in the last 10 hours.

STAX HAS SHOWN ME THAT I NEED DAV3 IN MY LIFE.

IM GETTING IT RIGHT NOW. pic.twitter.com/9ScjSCW5Wr

Surely, a pro can perform their best while using the best tools available, and for Stax it was DAV3. However, don’t force yourself to imitate some pro’s equipment if you can’t afford it (DAV3 costs almost PHP 9,000, definitely not budget-friendly). After all, it’s their profound skills, honed after years and years of training and tournament experience, that made them good in the first place and not their gear.