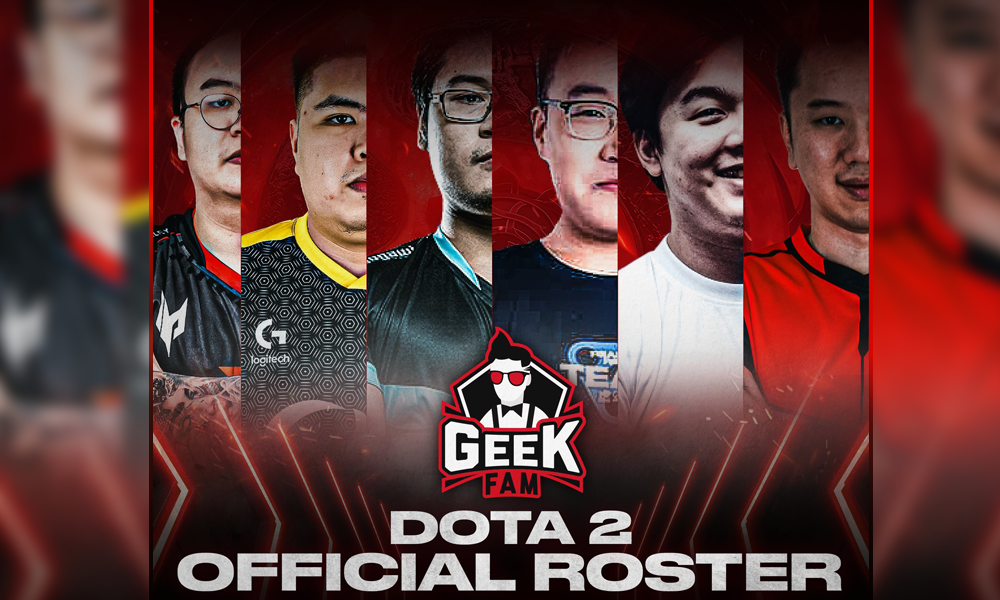 Malaysia-based Dota 2 team Geek Fam recently announced their return to the Dota 2 professional scene by revealing their roster for the upcoming DPC season. The team took a break in 2020 after releasing their former roster that housed Filipino talents Carlo “Kuku” Palad, Marc “Raven” Fausto, and Karl Matthew Baldovino. Karl and Kuku would then go on and reunite in T1, while Raven went on to play for Fnatic.

The new Geek Fam roster will be composed of the following players:

The team initially disbanded its Dota 2 roster in mid-2020 due to the suspension of the Dota Pro Circuit in the middle of the pandemic. The previous team was captained by Kuku and had the support of his would-be T1 teammates Matthew “Whitemon” Filemon and Kenny “Xepher” Deo. The team went on to nab a first-place finish in the ONE Esports Dota 2 League 2020 and secured a 7-8th place finish in the ESL One Thailand 2020 before disbanding.

The organization’s Dota 2 team went on a 2-year hiatus despite the Dota Pro Circuit league re-opening in 2021. They stayed out of the Dota 2 pro scene for a good two years, unable to field a lineup to play for the DPC. The team’s 2020 roster was one that fans had grown to love. The 2020 roster had a remarkable lineup, which leaves this year’s iteration with larger shoes to fill.

Three Filipinos make up the brand-new Geek Fam squad. Skem, who used to play as support for the Indonesian team BOOM Esports, is now back to playing carry. Skem used to be the carry for the Filipino team Neon Esports, who landed a playoff spot in the 2021 Singapore Major. Force, meanwhile, comes fresh off an astounding championship title with Cebuano team Polaris Esports. The team won the recently concluded Asia Pacific Predator League 2022 held in Japan earlier this month. The youngest of the Filipino trio, Kokz is looking to make a name for himself in the Dota 2 scene. He used to play as the midlaner for the Filipino team Neon Esports, who bagged four 1st place finishes this year with his help.

There is currently no information regarding the team’s position in the upcoming DPC season. As such, the team may have to start their DPC journey in the league’s closed qualifiers.