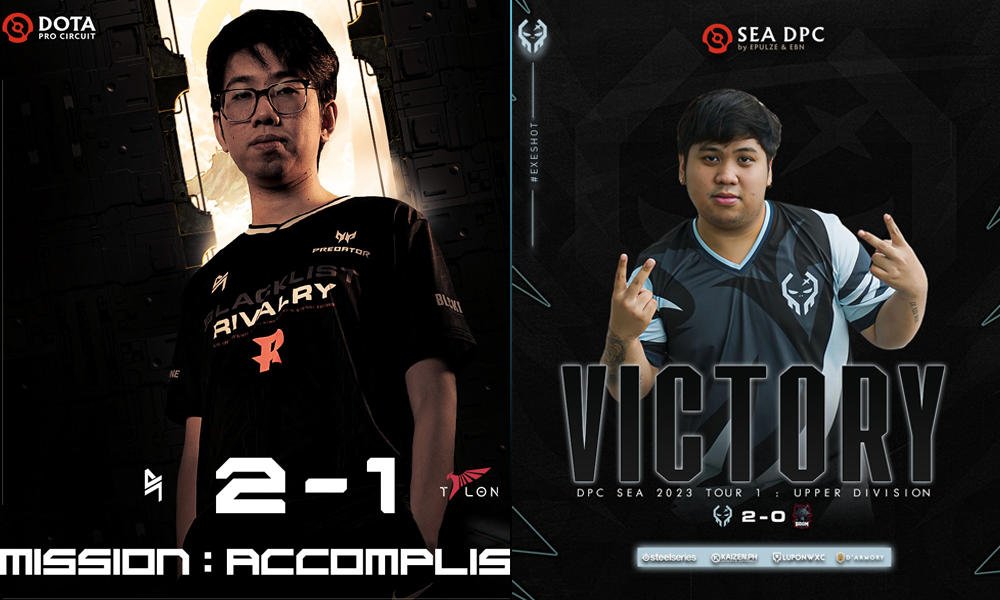 Photos from Blacklist International and Execration

Filipino Dota 2 team Blacklist Rivalry stays on top of the pack heading into the second week of the Dota Pro Circuit. The team leads with a record of 3-0, clinging to the top spot together with fellow Filipino team Execration.

Blacklist started their streak last Monday, January 9, with a stunning reverse sweep against fellow newcomer Bleed Esports. The team lost the first game by a rather large margin but managed to turn the tides in their favor in the next two games. This was a trend that would follow them since, with their match against Fnatic ending the same way.

Fnatic swept the floor with Blacklist during the first game, ending it with a 29-4 record. However, in true Blacklist Rivalry fashion, the team took game 2 with Carlo “Kuku” Palad’s untouchable Dragon Knight. Marc “Raven” Fausto’s Templar Assassin put the nail in the coffin for game 3, ending the game deathless and leaving his former team in the dust.

It was also Raven’s performance in games two and three against Talon Esports that helped the team cling on to their top spot. Despite a game 1 upset in the hands of Nuengnara “23Savage” and his crew, Blacklist Rivalry rose from the rubble and swept the claws of Talon Esports away from the win.

Team Execration, on the other hand, has had nothing short of an amazing run. While Blacklist Rivalry reverse sweeps their enemies, Execration uses the opposition to wipe the floor clean.

Execration’s inaugural DPC match had them sweep the floor with Talon Esports’ remains. The game closed in a 2-0 win, with the help of Jin Marrey “Palos” Lamatao’s godly plays in the offlane.

The same fate met their next opponent, Team SMG. Despite winning in score and gold, SMG was unable to beat Palos and the gang in game 1. Game 2 was spelled the same way, only this time Execration won both the scores and the game.

BOOM Esports were also left with quite an explosion after a 2-game onslaught by Execration. Palos and Mark Anthony “Bob” Urbina dominated the field and left no room for BOOM Esports to take even a single win.

That's TWO COMEBACK from our KINGS🖤💙

The teams both sit atop the SEA DPC Division I rankings, conquering the ranks and fueling Filipino gamer pride.

Blacklist Rivalry and Team Execration look to settle the score and break the tie this coming Friday, January 20. Both teams will have to beat each other out of the top spot, unless Execration loses to Geek Slate in their match today.

The SEA Dota Pro Circuit matches will be streamed on Twitch starting at 1:00 PM PHT.