If you’re playing a game or two at Wargods Guadalupe this weekend, don’t be surprised to see a sudden influx of women suddenly entering the internet cafe. That’s because its the site for this year’s Female Esports League (FSL) Qualifiers for League of Legends.

Sixteen (16) all-female LoL teams have confirmed to participate in the tournament, now on its second year. The champion will be the PH representative in FSL Elite in Singapore.

Now in its second year, the league has seen an influx of players organizing themselves from different communities. Some were even signed by established local esports brands. Here are some teams to watch once the action goes live this August 3-4 at 12 PM onward on the Female Esports League LoL FB page: 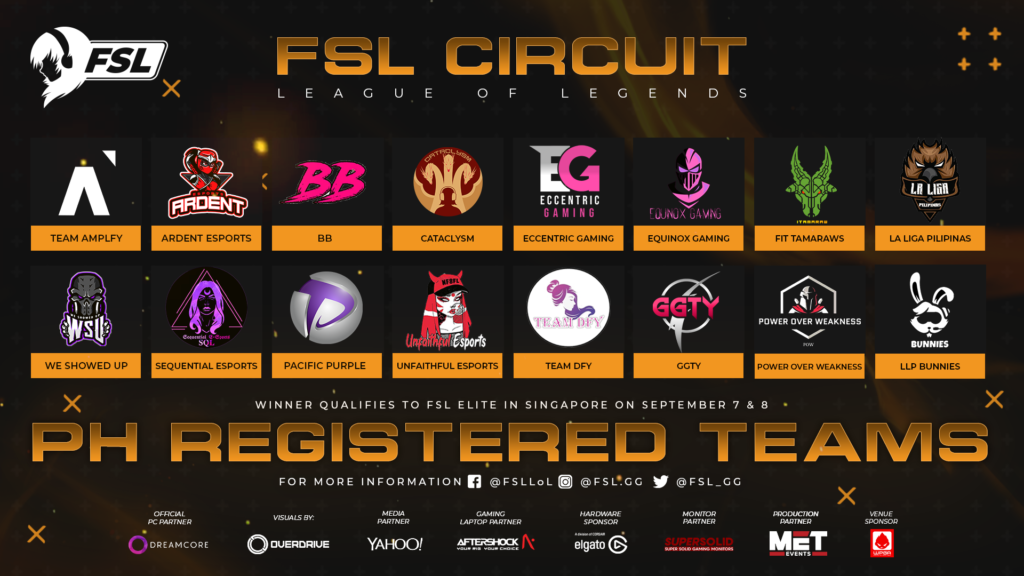 Placing within the top 4 last year, GGTY will be coming back this season. They suffered a significant roster change however. Two of their former members are now in different opposing teams: Unfaithful (Yup. She did that.) and BB.

This new team entry actually has three members who placed within the top 4 last year. Two are from the now-disbanded Team X, and another from GGTY. The latter was perhaps one of the most significant pick-ups as Marian “Bright1″ Enriquez currently maintains a Challenger rank in Solo/Duo. (Ggty, GGTY.)

It was certainly one of the teams that didn’t show a weak link. All of their members were able to shine one way or another that greatly contributed to their team’s victory run.

Yes, you read that right. Far Eastern University-Institute of Technology has sent their very own all-fem bets for the tournament. The university is known for their active campus esports scene. It was one of the main sites for Esports AcadArena. Through their own efforts, the school organized their own all-female LoL tournament which lead to their participation in FSL.

Esports leagues catering to all-fem teams is still met with mixed views until today. Some say that it isn’t the best way to actually get more women into esports and that the segregation will be more of a deterrent for them to be in the semi-pro or pro leagues. We reached out to FSL organizer, Kimberlyn See, for her comment:

FSL hopes to encourage female gamers to pick up competitive gaming by providing them opportunities to begin their competitive career in a safe and inclusive environment. We want to empower these girls and help to elevate them so that there will be female representative in the top level tournaments. Guess you can say we want to be their stepping stone.

Female Esports League is a tournament brand founded in Singapore in 2018. FSL launched with Dota 2 and since has expanded to more titles like Arena of Valor, Mobile Legends and League of Legends.