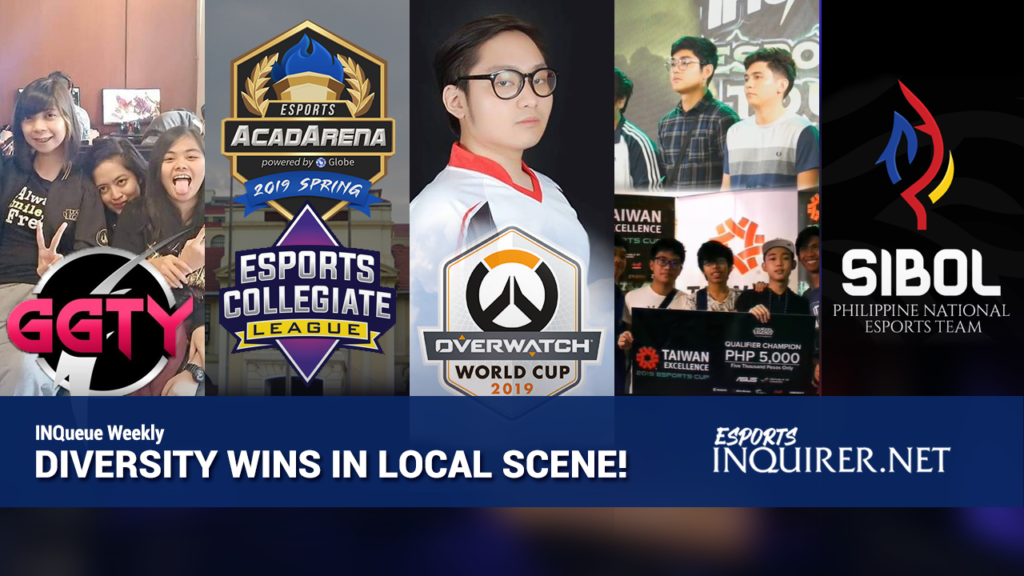 Female Esports League just ended, campus leagues were hinted and announced, amateur and pro tours round-up their qualifiers, we have talents going to BlizzCon, PH national team for SEA games open for trainees! What. A. Week.

Here’s a queue of all the good news you need to start-off another stormy week:

We included GGTY in our FSL primer as one of the teams to watch. Styling a convincing 2-0 against Ardent Esports in the finale, GGTY has locked in its place as the Philippines’ representative for FSL Elite next month.

What has to be clarified from the previous article is that their significant roster change was largely due to key members returning and committing:

Aiko is one of the founding members of GGTY (since 2016) but was on hiatus for more than a year. Gia (Serment), our current mid laner, has been with GGTY since 2017.

Their support team is also well-stacked; they have a sponsor for their practices and three (3) coaches who work with them in their practice sessions and drafts.

The Esports AcadArena (EAA) page recently teased a few changes incoming for their next split. Esports Collegiate League (ECL) on the other hand just closed their PUBG tournament and just recently launched their DotA 2 leg.

Surely watch out for this one.

The Thunder Esports Tour just finished their regional hop last August 3 to 4 in Cebu, completing their regional reps for the finals at SM North Edsa from August 31 to September 1.

Dota 2, Counter Strike: Global Offensive, and Mobile Legends: BangBang teams from the Pampanga, Cagayan de Oro and Cebu legs will meet then to fight for a 920,000 PHP prize pool.

Taiwan Excellence had their first round of qualifiers last August 3. The games were done in four (4) different shops across Metro Manila. Dungeon Akiba, Hey Gaming, Panaw and Portal One Esports advance.

The tournament still has three weeks of qualifiers till the Inter-branch stage on September 14 for CS:GO and September 24 for LoL.

The final seven (7) players representing the PH at the prestigious Overwatch 2019 World Cup was revealed last July 30. With tryouts were announced and happening earlier last month, the total pool was whittled down to a final twelve (12).

As the country’s reps, they’ll be competing in the annual BlizzCon to be held in Anaheim, California this November.

Announced last week, Sibol will be the PH’s team for this year’s South East Asian Games (SEA Games).  Ran by the PSEU, they’re also looking to fill their training pool. With some pro teams already directly invited, the Philippine Southeast Asian Games Esports Union also recently opened registrations to the public. We gathered the registration links for you but please head to the Sibol FB page for more info!

That’s it for this week’s INQueue! Check back every Monday for your weekly recap on local PH esports.