Of Monsters and Men: Halfway the Worlds 2019 Group Stage

Following a day off for League’s 10th Anniversary Celebration, the The League of Legends Worlds 2019 Group Stage is but one round robin away from its completion. Although we’ve seen G2 Esports and SK Telecom T1 stand head and shoulders above the competition, the rest are still fighting tooth and nail to keep their dreams of hoisting the Summoner’s Cup alive. With Worlds coming back up tonight, here are our predictions for the rest of groups.

Battle for the Skies (Group A) 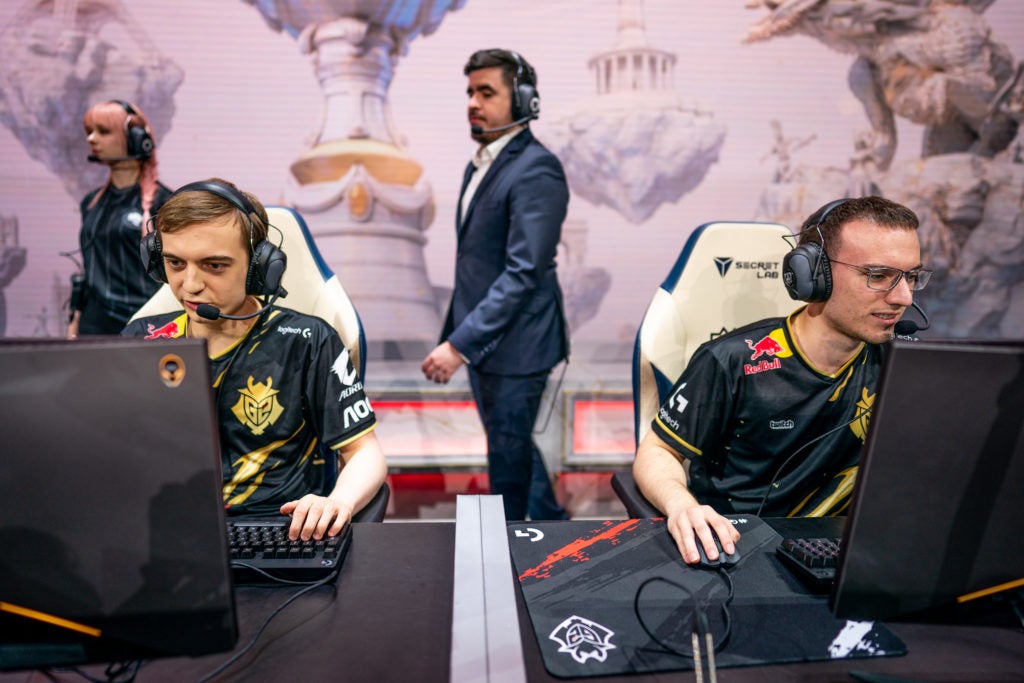 With a 3-0 record and crushing game statistics across the board (KDA, Gold/minute, Game duration, etc.), G2 Esports is looking nigh unbeatable with their triple-threat line-up and immaculate macro. G2 Esports have shown that they understand the game state incredibly well in the Worlds meta, getting first tower in all three of their games so far. If they continue on their track while ironing out their known issues of Martin “Wunder” Hansen and Rasmus “Caps” Winther unnecessarily dying here and there, G2 will be sure to clap the rest of Group A without a hitch. Griffin, on the other hand, has looked progressively better as the tournament has played out. Griffin’s Lee “Tarzan” Seung-yong has been at the forefront of their victories with his early-game influence on Lee Sin. Griffin has also shown their flexibility in the draft phase with a Garen and Yuumi bot lane and another game with Park “Viper” Do-hyeon on Irelia. Against Cloud9 and Hong Kong Attitude, Griffin’s Choi “Sword” Sung-won has to level up his play because these teams are fully capable of taking wins under their belt if given the chance. 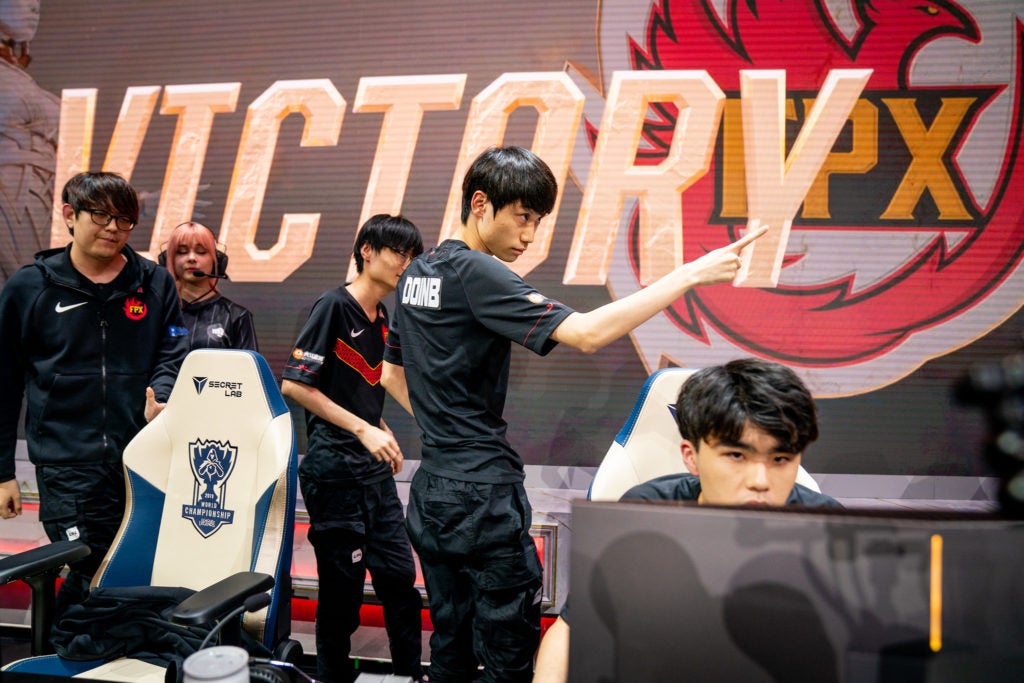 Starting with an upset loss against CBTC J Team, FunPlus Phoenix started groups on the wrong footing and worried fans of their hopes for the group stage. With their one-sided wins against Splyce and GAM Esports however, FPX is starting to look better and better as the games come and go. In their wins, Kim “Doinb” Tae-sang has been the primary carry of Phoenix with a 33.2% damage share and a combined KDA of 22.0 (10/1/12). Alongside Doinb, Gao “Tian” Tian-Liang has also been a pillar that the rest of the team can rely on to carry going 7/1/6 on Qiyana against the esteemed GAM Esports Đỗ “Levi” Duy Khán. If FPX continue on their upward trend, we can see them dominating the rest of Group B and go 5-1. 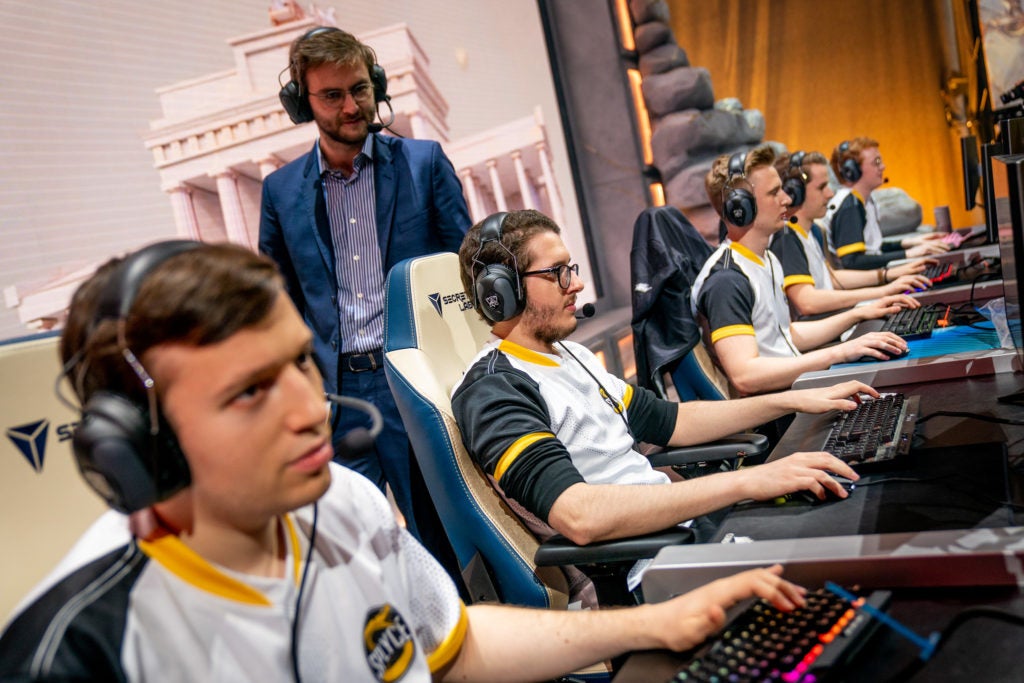 Hear me out. Despite the abysmal performances of Splyce’s solo lanes in the first half, Splyce will be able to learn from their mistakes and improve their drafts for the games to come. At the helm of this revival will be Andrei “Xerxe” Dragomir, who has time and time again proven he’s fully capable of tracking the enemy jungler and creating leads for his team. With an average game time of 40:09, their main competitor in J Team will be one tough opponent to outlast, but if the game extends more than 35 minutes, Splyce’s got it in the bag.

Survivors of the Group of Death (Group C) 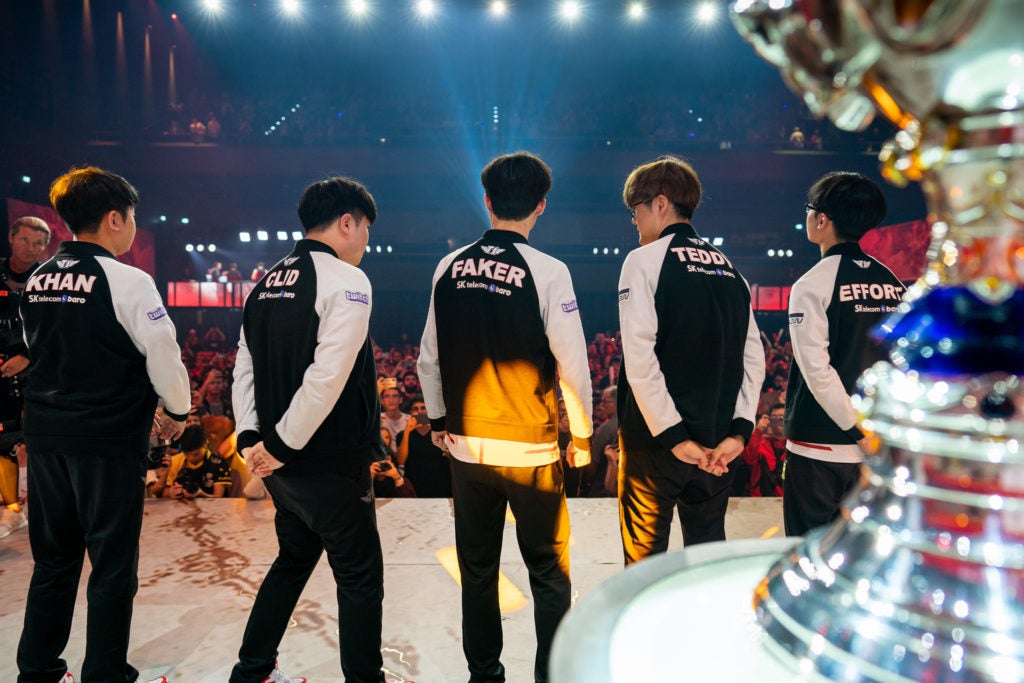 The Unkillable Demon King is back. SKT is back on form in their return to the Worlds stage and is styling on Group A with their slow-and-steady methodical playstyle tempered with a fair bit of aggression in the early game. With Kim “Clid” Tae-min in the jungle, SKT finally has a working jungle-mid duo that has gotten them the advantages they need to comfortably control the pace of the game. Lee “Faker” Sang-hyeok, as usual, is leading SKT’s charge with a whopping 1458 gold differential at 15 minutes that has undoubtedly helped him reach his 29.5% damage share in their wins. Alongside G2 Esports, SKT look poised to move forward into the knockout stage with little to no difficulty. Considering that SKT is in the group of death as well, their 3-0 start is a very hopeful tale for their future in Worlds 2019. 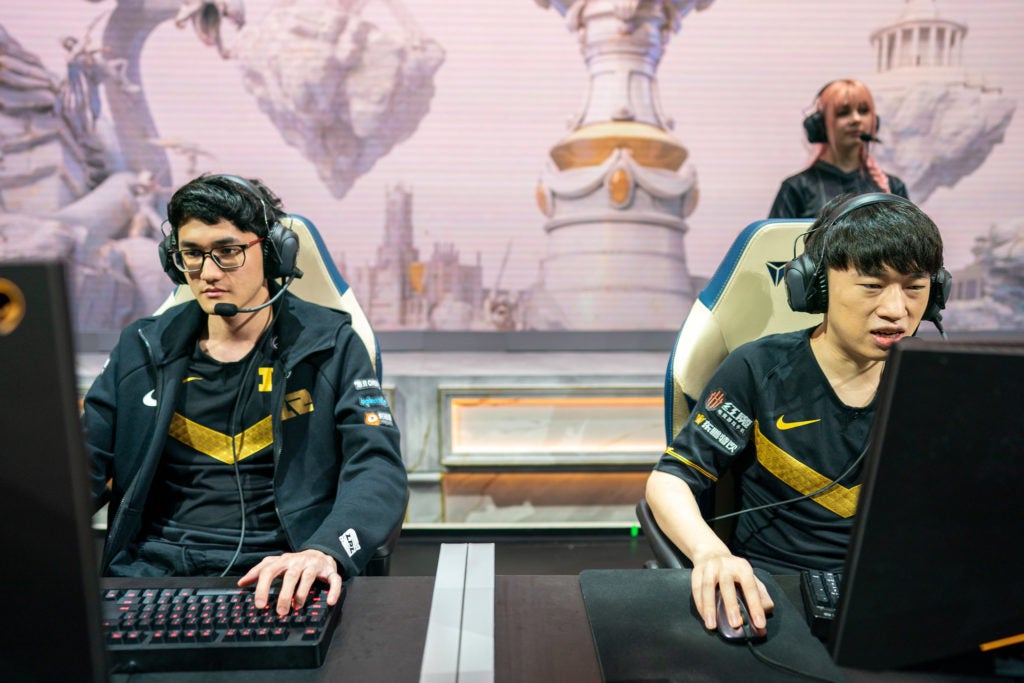 Once again, the only team to have given SKT a rough time was the LPL’s Royal Never Give Up in a close 42-minute game. Aside from that, RNG’s still bot-centric playstyle has proven to be quite hard to beat in their previous games. Jian “Uzi” Zi-Hao is still at the center of RNG’s victories with his consistent ability to get gold from the map with an impressive 11.4 CS per minute. But this year, Uzi’s Top Lane is not to be trifled with as Xie “Langx” Zhen-Ying has shown to be a stalwart solo laner for RNG. With a 19.0 KDA in their wins, Langx can sufficiently hold and even win top side so Uzi can have the space he needs to farm in the opposing side of the map. Against Fnatic and Clutch Gaming, RNG had no problem manhandling the Western representatives and are set to continue their streak towards the playoffs. 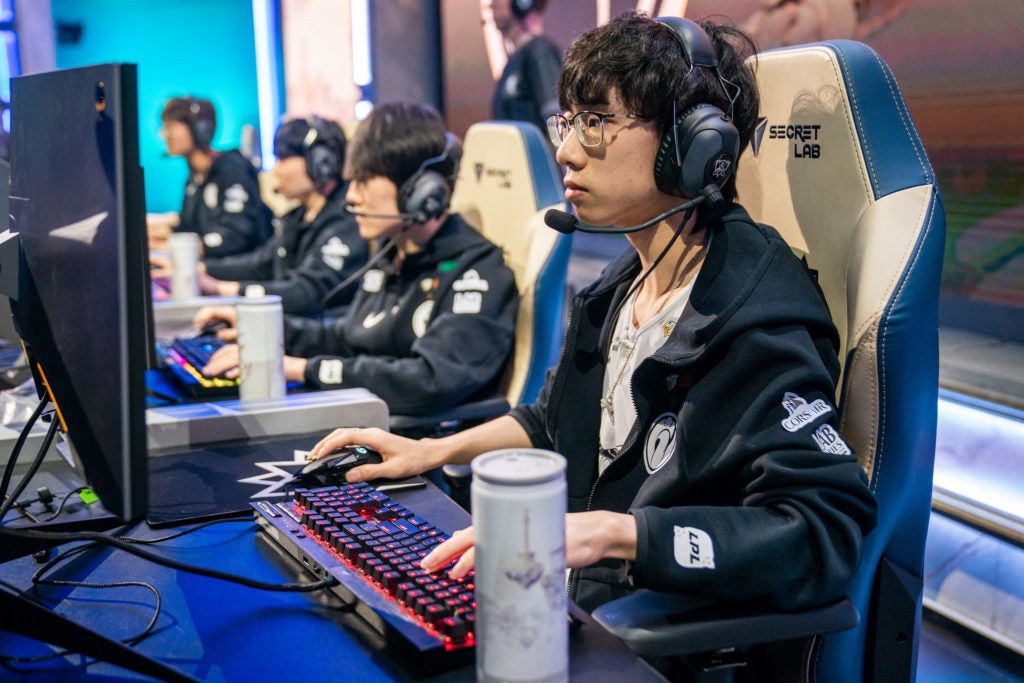 Despite uncharacteristically losing to Damwon in their last game, Invictus Gaming have looked incredibly well on the group stage thanks to the heroics of Kang “TheShy” Seung-lok and Song “Rookie” Eui-jin. Rookie, even though he has the least gold share among the carries, has the highest damage percentage in the team (30.7%) and is a part of 4 out of 5 kills of Invictus Gaming (81.9% kill participation). TheShy’s teamfighting prowess in their game versus Team Liquid is also one to praise the top laner for as he exerts a great amount of pressure on teams to shut him down. As they move on in the group stage, Yu “JackeyLove” Wen-Bo, however, has yet to show his true feathers and stand out. Considering the three-way tie they find themselves in now, Invictus Gaming’s veterancy and track history of victory will be crucial in deciding who will come out on top at the end of the group stage. Team Liquid, by law of triangulation where Damwon beat Invictus, Invictus beat Liquid, but Liquid beat Damwon, will barely make it out of groups second to Invictus Gaming in the coming 20th. Team Liquid’s early-game, thanks to Jake “Xmithie” Puchero, has been a success for the most part in the group stage. But, where they falter is translating those leads to landslide victories because of the poor performances Nicolaj “Jensen” Jensen has put out in their games thus far. Jung “Impact” Eon-yeong and Yilliang “Doublelift” Peng however, have moved heaven and earth with a 28.2% and 28.9% damage share respectively to cover for Jensen’s mishaps against ahq e-Sports Club going 1/6/10 on Orianna. If they want to move forward, Jensen will have to clean up his play and perform as he did in the last Worlds when he was on Cloud9. With Liquid’s smart jungle-support roams for vision and map control, the North American representative has a good chance to outperform Damwon Gaming on the deciding day of groups.

Catch all the action live on watch.lolesports.com with Group B heading to the stage 9 PM on October 17. Group A continues on October 18, Group C on October 19, and Group D on October 20 – all games will start 9PM and end around 3-4 AM.