Developed by Team Meowfia and published by game studio Senshi.Labs, Lutong Bahay puts players in the shoes of Maricela as she travels the Philippines to discover what it means to connect with one’s cooking.

Esports Inquirer recently spoke to Team Meowfia to talk about how the game evolved during development, the difficulties the team encountered while working on the project, and how they strive to achieve the goals they set for themselves. 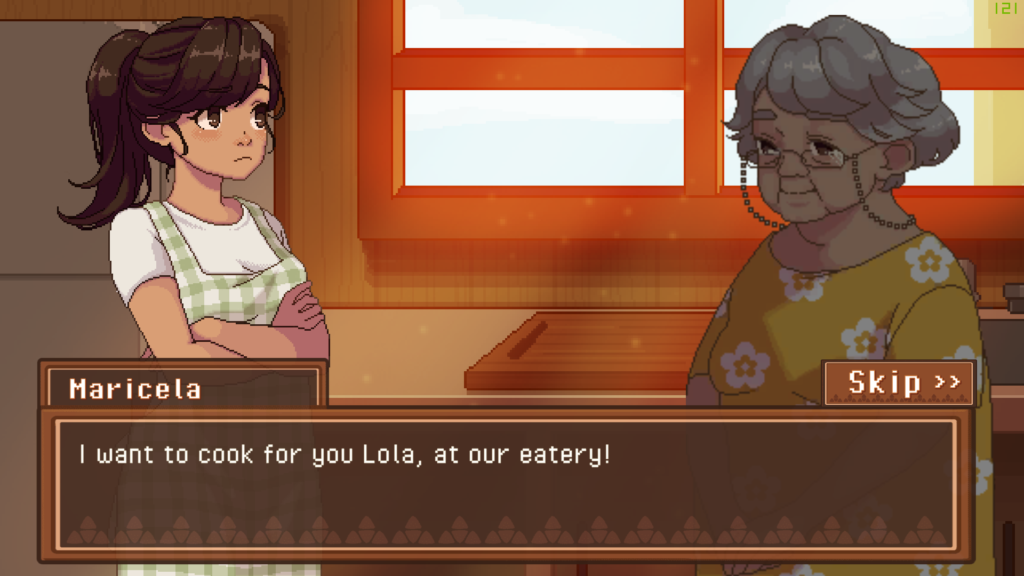 Maricela sets out on a journey to become a worthy successor of her Lola’s eatery.

“Filipino culture is centered around this fact, and so it has become its own language,” said Team Meowfia. “Making a video game about food preparation seemed like a good opportunity for the player to feel like they’re back home — whether it’s to the country, to their loved ones, or to simpler times.”

The concept for Lutong Bahay was based on a cooking game the team made in under 48 hours for Global Game Jam 2019 with the theme “What Home Means to You”. From there, they adapted it into their thesis project after tweaking the gameplay mechanics and the game’s overall style.

Lutong Bahay went by the name Taste of Home until September last year and was originally planned for a mobile release.

Cooking simulation aside, a segment where the player would be able to serve their dishes to customers (and receive feedback in return) was initially in the works. Meowfia later scrapped the idea to put all their focus on what the game was really about: cooking.

Hi everyone! We hope you're enjoying the game~

We released the game for PC, but I thought it'd be a waste not to share how we used to fold Lumpia on the phone!😆 pic.twitter.com/NCGzjUrlFt

Throughout development, Meowfia drew a lot of insight from local television programs such as Pinas Sarap, which didn’t only teach viewers how to cook the recipes by the book but also shared stories about the origin of each dish.

The team had to get creative to get a better sense of the historical and cultural context behind certain dishes as some information wasn’t readily available on Google. They even consulted books and references from their university’s School of Hotel, Restaurant, and Institution Management (SHRIM) campus library.

And if you’ve been wondering, the answer is yes, Team Meowfia is comprised of college students (from De La Salle-College of Saint Benilde, to be exact).

The core team consists of Michelle Lim and Nahyan Paruli (Programming), Gia Canta (Audio and Art), and Trina Pagtakhan (Art). For the Producer and Game Designer roles, they had Neal Padama for their first thesis, Turtle Tale, and Dong Lao for their third thesis, Wanderdog.

“Making a cooking game isn’t as easy as it seems”

“We had to design the mechanics, code, make music, make art, and write a thesis paper all in a few months’ time,” Team Meowfia shared while talking about the challenges they encountered while working on the game.

“While making the game, it was crucial to think ahead of the player — like what would happen if they put too much salt? Too little salt? How would that be translated into code? How many art assets would it take? And so on,” they added.

The members of the team admit that when they started out, their main motivation to finish a game was merely for the sake of passing their thesis. Over time, however, they’ve enjoyed the challenge of trying to showcase their distinct style in their projects.

Thank you everyone for the overwhelming response! We've seen a bunch of comments expecting a full-length game, so we would like to clarify that Lutong Bahay is a mini game that could be played within 15 minutes on PC! (1/2) pic.twitter.com/poRTb53e7V

Lastly, Team Meowfia has a message for aspiring game developers in the Philippines:

Don’t hesitate to reach out to communities such as the Game Developers Association of the Philippines (GDAP)  or IGDA. The local game development community is incredibly supportive and generous with their knowledge! It’s also a good idea to post progress shots or devlogs of your projects on social media, to garner attention and interest from fellow game developers, and possibly even potential publishers!

As of the moment, Meowfia doesn’t plan on building Lutong Bahay into a full game (but that might change in the future).