PPGL to Host VALORANT and Wild Rift Cups for 2021 Summer

The Philippine Pro Gaming League or PPGL, the largest multi-game esports league in the country co-owned by Mineski Philippines and Globe Telecom, is hosting the official national tournaments for VALORANT and League of Legends: Wild Rift this 2021. PPGL is partnering with Predator Gaming for Challengers and OPPO and Globe Virtual Hangouts for the Wild Rift SEA Icon Series to continue its thrust of becoming the stepping stone for the international success of Filipino gamers.

The 2021 VALORANT Challengers PH – Stage 1 has just ended crowning BREN Esports and ArkAngel as the PH representatives in the Masters SEA, competing with teams from Thailand, Indonesia, Malaysia & Singapore, and Hong Kong & Taiwan. You can watch the Tagalog broadcast on March 19-21 on the official PPGL Twitch channel and PPGL YouTube channel.

Meanwhile, Stage 2 opened its registration on March 15 with a new global format rolled out by Riot Games leading to the first global LAN event for Masters happening in May. The second stage will now feature two (2) open qualifiers and three (3) knockout playoffs taking place over five weeks to determine the two best teams representing the country in the SEA Challengers Final, an all-online regional tournament. Teams from Thailand, Indonesia, Philippines, Vietnam, Hong Kong & Taiwan, and Malaysia & Singapore will play for the right to represent the entire Southeast Asian region in the Masters Stage 2 event in Reykjavík, Iceland.

The Wild Rift SEA Icon Series Philippines will have Globe Cup’s PhP 10,000,000 prize pool for 2021 alone distributed all throughout Summer and Fall seasons. Each season will have PhP 5,000,000 and a total of four (4) open leagues – North Luzon, South Luzon, Visayas, and Mindanao.

“We are very excited about the upcoming Preseason of the Wild Rift SEA Icon Series in the Philippines. This tournament will showcase the best of the best when it comes to playing Wild Rift. We are also introducing a point system called “The Globe Cup”. A system where teams earn corresponding points depending on their placing during the different legs of the tournament.” said DC Dominguez, Head of Globe Games and Esports

Teams advancing to the group stages per open will win points for every series won which they can redeem for an equivalent cash prize. 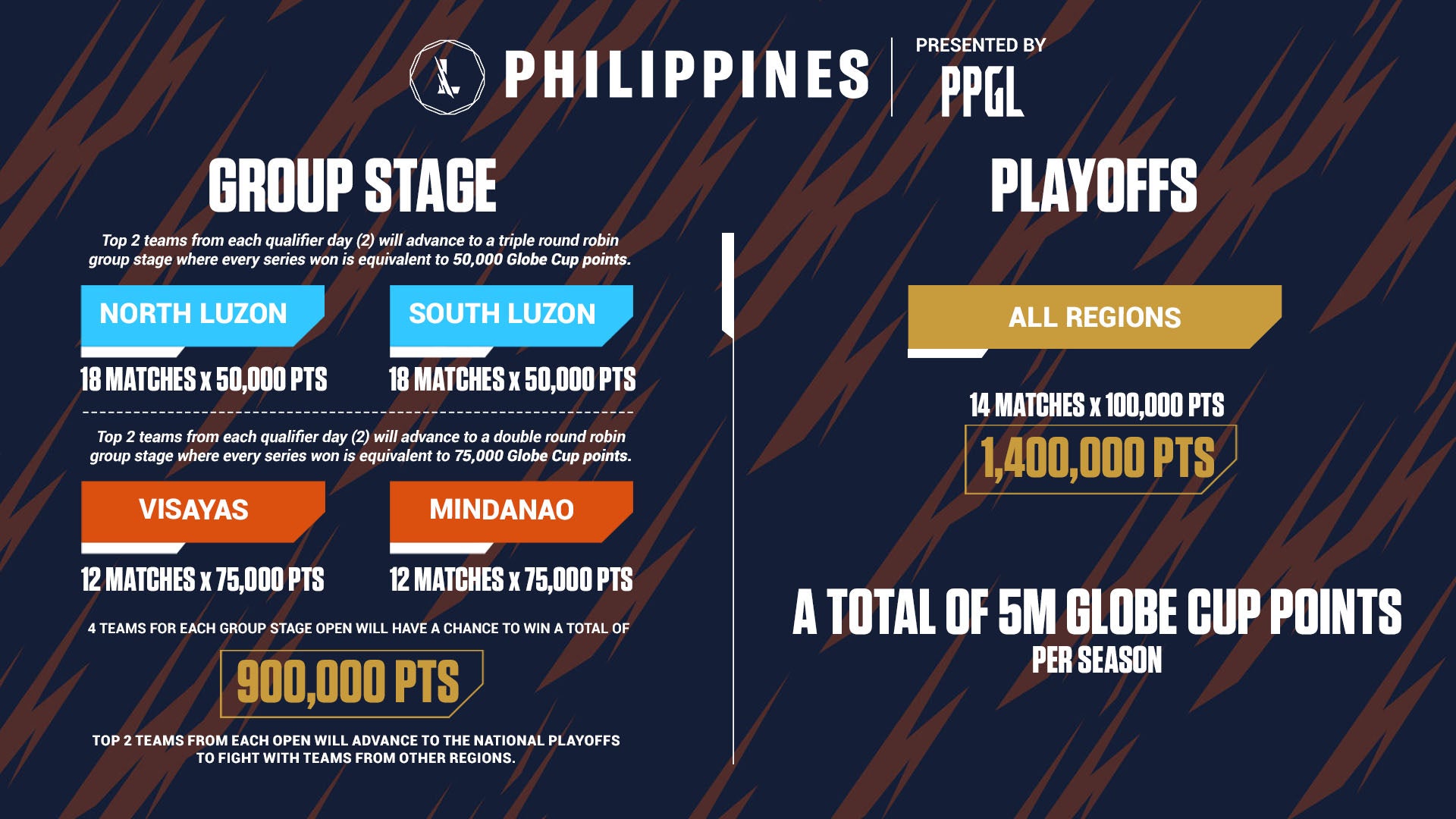 A total of PhP 3,600,000 Globe Cup points will be distributed to the teams during the group stages. Moreover, the top 2 teams from each regional open will advance to the national playoffs where they will compete to become the best in the country. Teams will also receive 100,000 points for every series won totaling to PhP 1,400,000 Globe Cup points. The points can only be redeemed after the season ends, and the top 4 teams with the highest points will have direct slots to participate in Fall Season’s group stages.

“We are honored to bring one of the much-awaited tournaments in the country, Wild Rift Icon Series 2021, that paves way for us to help grow the Philippine esports industry and cultivate existing pro-gamers and new talents. Watch out for OPPO’s announcements and activities, as we have special surprises for all the Filipino mobile gaming fans and communities in the coming days supporting the biggest tournament,” said OPPO Philippines Marketing Director Raymond Xia.   OPPO, the official mobile brand partner of Mineski for the Wild Rift SEA Icon Series tournament in the Philippines, is set to bring the full mobile gaming experience to its fans as OPPO highlights its smartphone features specifically created to achieve better gaming experience.

Both the VALORANT Challengers – Stage 2 and Wild Rift SEA Icon Series: Summer Season in the Philippines will be held as all-online tournaments in line with safety measures currently being observed due to the pandemic. Registration is FREE and open to all aspiring pro teams in the country.

All updates for registrations and broadcasts will be found in the official channels of PPGL.

This is an official press release from Mineski Philippines.