Press F to pay respects for another fallen music bot.

After 5 years of bringing good vibes and music to 20 million Discord servers all over the world, Rythm will be shutting down on September 15th, 2021 at 8:00am PST after receiving a cease and desist notice from Google. The notice was filed due to a breach of Youtube’s terms of service, having modified the streaming site’s use and profiting off it.

Google gave a leeway of seven days for the service to go offline. Yoav “ImBursting” Zimet, the creator of the bot, announced his compliance and Rythm’s departure on its Community Server earlier this morning. 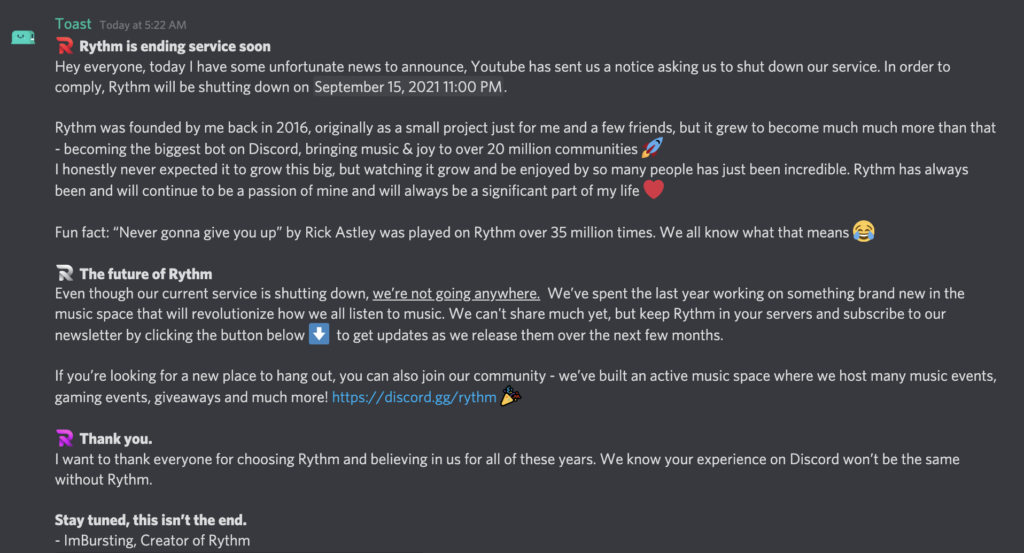 Rythm will be unable to stream any music after it shuts down. For paid subscribers of the bot, Rythm Premium holders will receive a refund within the next 1-2 months.

Despite Google’s charges, Rythm will remain in users’ Discord servers to deliver updates on its newsletter, such as giveaways and community events.

It won’t be too long until the next music bot goes offline. “We expect in the next few weeks, most known music bots will end up shutting down just like a few already have,” according to Rythm’s official website.