As the most recent seasonal tournament wraps up, a new expansion dawns at Legends of Runeterra (LoR). LoR’s newest expansion, Magic Misadventures, saw the usual card patches (everyone satisfied with the Poppy nerf?), the introduction of the new keyword Fated, and 67 new cards — which includes the new card subtype Mecha-Yordles and 4 new champions (Ahri, Kennen, Rumble, and Pantheon).

Esports Inquirer was granted early access to the new expansion for playtesting. We also sat down, talked, and theorycrafted with returning guest Ralph Adrian “Aeolius” Kintana — a casual player for Home of the Aces and coach, manager, and analyst for USC Warrior’s Arena.

THE INTERVIEW WITH HOTA AEOLIUS

Esports Inquirer: What are your initial impressions of Magic Misadventures?

Aeolius: I find the upcoming cards in the Magic Misadventures expansion fun as they might shake things up in Legends of Runeterra’s current meta, most especially in Ahri’s case as she brings impressive recall synergy with both old and new cards such as the Flame Chompers! unit .

Esports Inquirer: What are your thoughts on the new keyword ‘Fated’? Is it meta-breaking? A must in future deck building?

Aeolius: Overall, it is a nice keyword. Fated is great if you have a lot of ally-targeting cards, such as barriers and buffing spells, in order to abuse the keyword. Hpwever, players must take note that Fated only works once per round. As for it being a must-have in decks, I don’t really think so as it’s not as meta-breaking as one might think.

Esports Inquirer: Amongst the new champions, which do you prefer between Ahri, Kennen, Rumble, and Pantheon?

Aeolius: Amongst all four champions, I prefer using either Ahri or Pantheon. I would use Ahri simply for her recall mechanic. People like myself are still figuring out the best build for her. As for Pantheon, I like him because he is a solid unit with decent keywords. He could also be a decent late-game finisher.

Esports Inquirer: Do you have meta predictions for rank climbing and tournament decks as per the new expansion and patch update?

After theorycrafting and playtesting during the early access, here are some of the decks we used and found fun and great to play with: 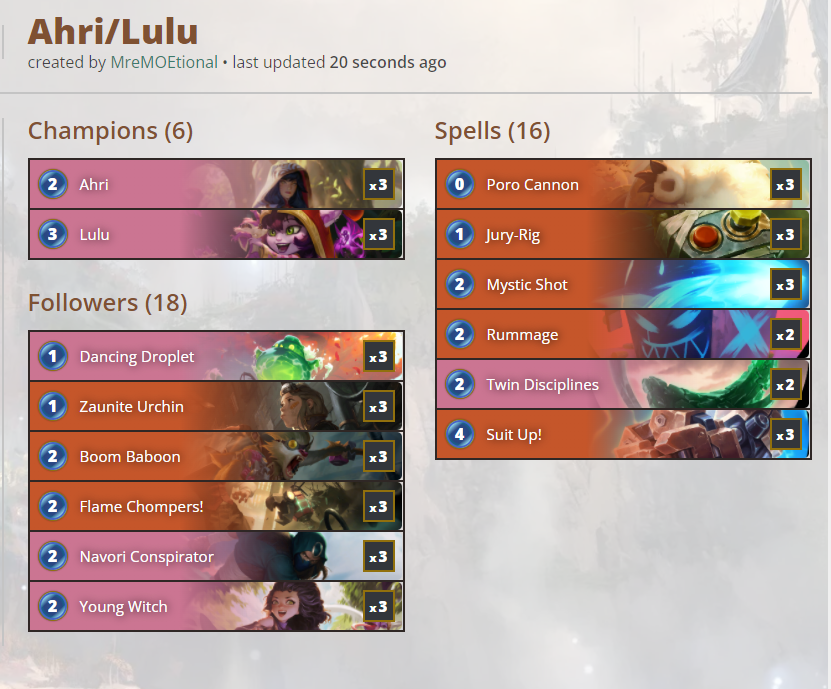 Crafted originally by MreMOEtional himself, Ahri and Lulu’s pairing made use of both of their combo-oriented playstyles. One nifty strategy we discovered was to summon Ahri on Turn 2 and use her to combo with Flame Chompers! as they synergized pretty well. 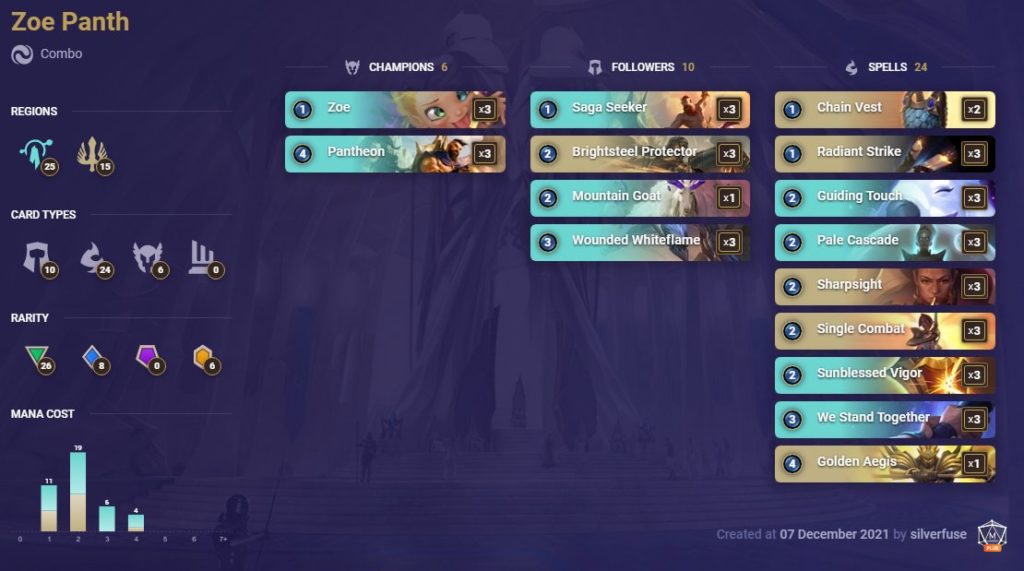 A super fun meme deck. The main goal with this deck is to level up Zoe then drop a leveled-up Pantheon for keywords. Ideally, one must have a wide board before dropping Pantheon in order to maximize his effect (aim for at least a minimum of 8 keywords).

A new Irelia deck variant with Kennen, the goal here is to pump (or buff, whatever term you prefer) the Greenglade Duo and Sparring Student with Blade Dance. If you can remember the Irelia-Azir deck variant, the Yordle Captain replaced the Shurima champion for this deck.

Despite the connection issues during the early access, we had a great time testing, tweaking, and discovering stuff with this new expansion. To learn more about the Magic Misadventures expansion, and as well as the accompanying patch update, you can read them at the official Legends of Runeterra website.

PH 51st on list of world’s most powerful militaries