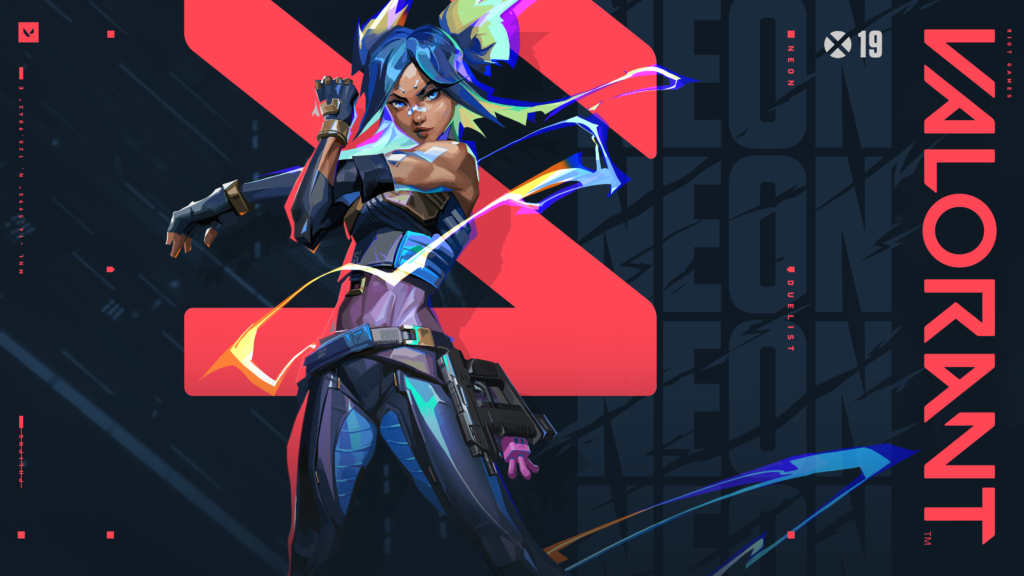 Word of the newest VALORANT Agent, Neon, spread lightning-quick these past few days. We already know what she looks like, and a short gameplay trailer was also released. Let’s find out what Neon really does in this Neon Quickstart Guide.

Hailing from the Philippines, Neon’s kit revolves around one mechanic: speed. As a Duelist, she will zoom, sprint, and zap the enemy team faster than you can blink. FIRE two energy lines forward on the ground that extend a short distance or until they hit a surface. The lines rise into walls of static electricity that block vision and damage enemies passing through them.

INSTANTLY throw an energy bolt that bounces once. Upon hitting each surface, the bolt electrifies the ground below with a concussive blast.

Unleash Neon’s full power and speed for a short duration. FIRE to channel the power into a deadly lightning beam with high movement accuracy. Both duration and slide reset on each kill.

Her C – Fast Lane allows Neon and her team quick entry while shutting off many dangerous angles. The fact that it also deals damage to enemies means it’s easier to win fights when they try for a duel. Neon creates a hallway with her walls, and you only need to look one way: forward.

Q – Relay Bolt is useful when clearing tight spaces and halls, either forcing enemies out of corners or concussing them. Combined with the speed from E – High Gear and the slide that Neon gets, winning duels making space for your team is almost effortless.

You won’t be mistaken if you think X – Overdrive is like Jett’s Blade Storm, as they both offer ways to cheat the economy. Neon gets another bonus though, her speed. Being at full speed means she has access to her electric slide which resets every couple kills. Be ready to sheesh as we get another Agent that has resets and cheats the economy. Thanks, Riot.

Playing As, or With Neon

Dubbed the “Jett killer,” Neon takes Jett’s space in a team. Neon’s kit allows her an identical agency Jett’s Cloud Burst + Tailwind entry could offer. That being said, Neon is not self-sufficient as she neither has a flash nor a molly-type ability to supplement her entry. Her Relay Bolt might be useful for gaining access into space, but she lacks a reliable smoke afterwards.

A team revolving around a Neon as Duelist would have a reliable flash, like Skye. An Initiator like KAY/O or Breach also works well, with smokes provided by an Astra or Brimstone.

In the end, it all boils down to comfort. Which Agents you and your friends find the most success on is the best one. Have fun, and don’t forget to Defy the Limits.

If elected VP, Sara Duterte will push for mandatory military service for all Filipinos