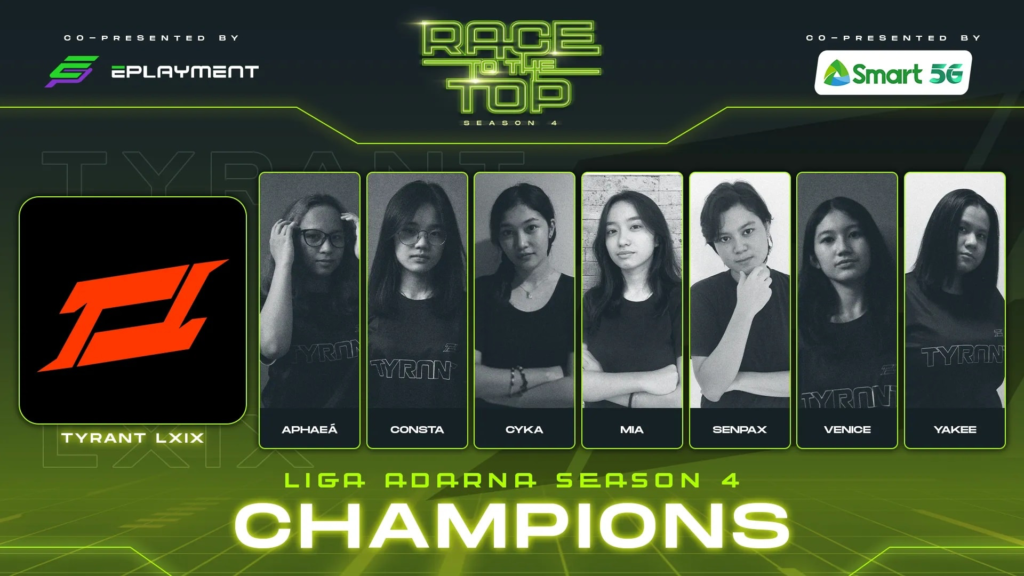 Tyrant joins the ranks of their fellow Liga Adarna Race to the Top champions in other titles: Aguila Esports FE for Mobile Legends: Bang Bang, Nigma Galaxy for Valorant, and Team OK for League of Legends: Wild Rift.

Women’s strength and skill on display

Liga Adarna season 4 is notable for the various players across all the different tournaments as it represented a number of challenges, resulting in the need for crucial adjustments.

“The highlight of the season for us was the whole playoffs,” said Raenan Isabel Villa, Team Captain of Tyrant Lxix. “Because of the unexpected effects of Typhoon Odette, we had two players in our lineup that couldn’t make the playoffs. That was a huge factor because we had to make big adjustments overnight—we got to a point where we said it would be okay if we lost due to the circumstances. But thanks to the faith of our supporters, we managed to make it through and successfully defend our championship even without our main lineup.”

Despite these obstacles, the league’s success was guaranteed largely thanks to the valuable efforts of Smart in making sure the tournaments ran smoothly with their award-winning and consistent mobile network, allowing the best Filipina esports talent to shine through.

“We are thankful to Liga Adarna and Smart for giving female gamers a venue to showcase our skills and talent in esports. Through this, we hope that we inspire more women to pursue their passion in gaming and prove that we have what it takes excel in this field,” said Mery Christine Vivero of the Season 4 Mobile Legends champions LVD Huntress (now known as Smart Omega Empress).

“Liga Adarna and Smart are paving the way for Filipino esports athletes. With more support, local esports teams will be more empowered to dominate the global stage!” said Jolene Poh of the League of Legends: Wild Rift champions Team OK.

“We’re truly happy to see big esports patrons like Smart supporting athletes, especially women. We think it’s important for players and aspiring esports athletes to have events such as Liga Adarna to have a goal to work towards and to see the fruition of their hours of practice,” added Jehiel Claveria Ardiente, team coach of the Valorant champions Nigma Galaxy.

Commitment to enabling the growth of Philippine esports

Liga Adarna is the Philippines’ biggest and only all-female esports league. Smart’s support of the latest season is in line with their longstanding commitment toward the fastest growing esports scene in the country and toward growing the passion, skill, and talent of all Filipino gamers.

Smart subscribers can build their skills, step up and get Double GG with Double Giga Games, which comes with a solid allocation of 2 GB Games every day for their favorite mobile games like Mobile Legends, Call of Duty Mobile, League of Legends: Wild Rift, as well as stream their favorite content creators on Facebook Gaming.  To register to Double Giga Games, download the GigaLife App on the Apple App Store or Google Play Store or dial *123# and choose Double Giga.

They can also enjoy next-level speeds while gaming and streaming thanks to the country’s fastest and most reliable 5G mobile network as reported by Ookla. To date, Smart has already fired up around 6,400 5G base stations nationwide making it the country’s first, fastest, and widest 5G network.

Smart has also reasserted its dominance as the Philippines’ fastest mobile network for the fourth year in a row, based on analysis by Ookla of tests taken with Speedtest® covering the first half of 2021.