The incident came from their heated matchup yesterday as Bren and AE faced off in a very intense best-of-3 series. Game 1 belonged to AE as they managed to snag a 13-9 victory at Icebox. Bren then retaliated with an imposing 13-2 victory on Ascent. With both teams with one win a piece, AE managed to steal the series victory via an impressive and commendable 13-11 comeback on Haven. 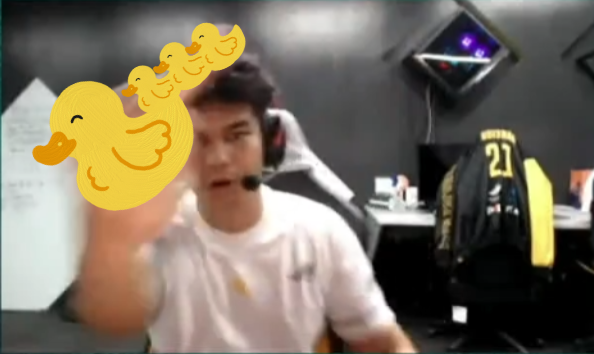 BraiNfreeZe showing off his duck collection.

The Bren VALORANT professional player’s controversial action seemed to have stemmed from Game 2. The game itself had questionable actions from Bren’s side (e.g. spamming bullets on AE’s fallen bodies and tactical crouching), which merely seemed like light-hearted exchanges at first. Even Action PH’s George “Georggyyy” Lachica downplayed the situation on PPGL’s Facebook livestream.

Georggyyy’s comment translates to “A lot of crybabies. They just spammed the bodies.”

However, after Bren won the game, a screenshot of BraiNfreeZe’s bird-flipping spread like wildfire over the internet. The screenshot obviously upset most of AE, most especially Enrico “Ching” Perez who later clapped back with a “2-1 VERSUS TRASH TEAM” tweet right after they won the series which has now since been deleted. 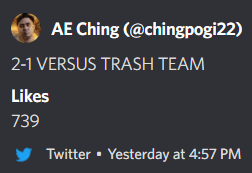 Ching immediately tweeted this just right after they won the series matchup against Bren.

Ching also made the PPGL Facebook audience know his displeasure over the situation as he commented on the livestream as well. 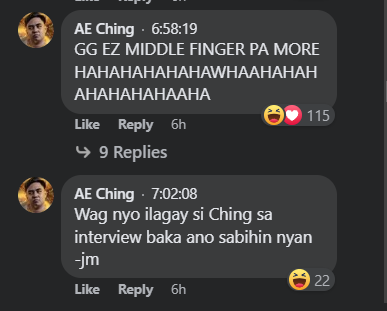 Bren’s VALORANT manager Ishan “ggishan” Adolfo immediately diffused the situation as he replied to Ching’s tweet. She acknowledged her player’s mistake, revealed that she immediately reprimanded BraiNfreeZe after the said incident, and apologized to Ching and the rest of the AE squad.

Meanwhile, BraiNfreeZe himself followed ggishan’s footsteps and apologized publicly and revealed that he was just simply too caught up in the heat of the moment at the time.

I apologize to everyone that may have been affected by my actions, it was a heat of the moment kind of thing, nothing personal. I take full responsibility for my actions

On the other hand, Ching also apologized to Bren for expressing his dissatisfaction without thinking about consequences.

I apologize to @BrenEsports Valorant Team for expressing my emotions without thinking. The unprofessional act of a certain player got through me and my instincts was to retaliate. Thank you have a good night!

The controversy has sparked a debate on what constitutes as friendly, healthy, and competitive banter, tactical trashtalking, or just plain disrespectful actions.

Unpopular opinion: I think players should be allowed to talk their shit (tbag, bm by shooting bodies, cam faces/middle fingers, twitter beef, "ggez", etc.) and orgs/fans/community shouldn't reprimand them for it.

AS LONG AS it stays in the server.

banter certainly makes the game much more entertaining. However, we need to be able to draw a line and maintain a certain level of professionalism else esports will never be taken seriously like real sports.

Don't forget, trashtalking is a tactic aswell. You can throw them off mentally, it increases competitiveness aswell. People trashtalk, bm, etc. to motivate them. It should be allowed but ofc not below the belt and nothing too personal. Trashtalk is not onesided afterall.

I think shooting the body inside the game is okay pa sir. Maraming "PRO PLAYERS" ang gumawa niyan just to boost their confidence and siyempre ma hype up yung team. May kanya kanya tayong ways or methods para ma-deal yung pressure inside the game. For me, hindi unprofessional yun.

Unfortunately, despite both teams already reconciling and owning up to each of their own lapses in judgment, fans have still harassed both sides. This even got to the point where death threats were thrown around.

People out here sending DTs to me and my team. I can't contain the toxicity anymore. Please. Give us a break. 😔😭

This situation is unfortunately not new to VALORANT and the esports scene in general. Just earlier this week, Lim You Xiang “lenne” Lionel from Bleed eSports also gave Paper Rex the bird after they took the first map in their series in VCT Malaysia & Singapore Stage 2: Challengers where they eventually lost 2-1. Moreover, it can be remembered that Blacklist International’s Kiel “Oheb” Soriano was penalized and suspended for two games by the Mobile Legends Professional League – Philippines after his own similar incident.

With that said, Bren and AE had already cleared the air and currently have no more animosity existing between them. As for their respective VCT standings, Bren Esports is currently sitting comfortably in third place while Alpha Esports Pro stands in fifth.