She then followed it up with another tweet in which she described GrindSky Eris as the ‘best org’, with an accompanying screenshot of what could possibly be someone from the organization itself.

“It’s a pleasure having you as part of the team. Of course, it’s sad that you are leaving the team but [we are] relieved knowing that you are doing this to take care of your own self. Send [our] regards to your family,” the message stated.

quitting esports for good!! this will be my last trip with grindsky eris!! :))

Prior to her announcement, Rayray had hinted about her departure from the team through another tweet wherein she stated “Quitting esports for good! This will be my last trip with GrindSky Eris!”

The trip she was referring to was Grindsky’s visit to Iloilo, the hometown of her fellow teammate Angel Danica “Angelailaila” Lozada. 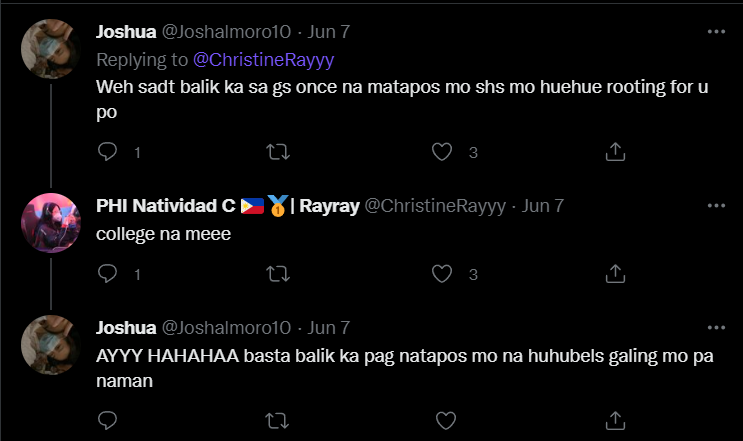 The reason behind her departure was not explicitly stated but we can only infer from her latest tweets and interactions that it was a combination of going to college and prioritizing her own mental health.

With that said, GrindSky has yet to officially announce her departure on their social media pages but they did plug Rayray’s recently recovered Facebook page.

Rayray was part of the SIBOL Women’s Wild Rift squad that took the first esports gold for the Philippines at the 31st Southeast Asian Games held earlier this year in May at Hanoi, Vietnam.