The TI11 SEA Qualifiers upper bracket final saw a match between two of the strongest teams in the tournament. Talon Esports and T1, both undefeated juggernauts in the upper bracket, faced off yesterday, September 16. Talon Esports emerged victorious, sweeping T1 all the way down to the lower bracket.

A lesson in crowd control

The mid game was a strong back-and-forth between the two teams, with neither of them taking a strong lead. Teamfights kept happening across the map, with T1 slowly pushing into Talon Esports’ towers. 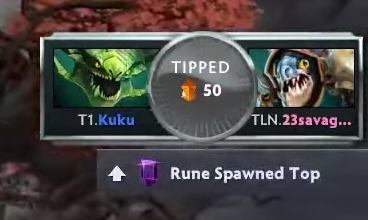 A mid lane clash brings down most of T1, forcing Ana to buy back and attempt to turn the fight around. This backfires, however, as he instantly gets deleted by 23Savage’s Slark. Talon wipes most of T1, leaving only Matthew “Whitemon” Filemon and Kenny “Xepher” Deo to defend the base against a fully-stacked Talon Esports. T1 call “gg” after almost an hour and being down 34,000 gold against Talon.

A race against time and tentacles

Game 2 opened with Talon Esports picking Faceless Void for 23Savage, outfitted with the newest Arcana for the timewalker. The rest of Talon Esports picks around the Faceless Void pick, drafting heroes that create space in the early game. T1, on the other hand, entered the second game with Ana’s Lone Druid and Topson’s Invoker with a godly reputation.

Talon Esports controlled the early game, painting the scoreboard 7-0 in their favor. Damien “kpii” Chok’s Primal Beast ensured that T1 can never be too careful, as he could charge at any moment’s notice and change the tide of battle.

23Savage was able to farm safely for most of the early game, leading to his power spike coming earlier. This proved to be a huge problem for T1, whose composition relied on a late-game scaling Lone Druid.

Despite taking the lead in pushing lanes, T1 calls “gg” at 45 minutes after being swept clean by the unstoppable onslaught of 23Savage.

With this loss, T1 sinks into the lower bracket. The team will have to defeat Polaris Esports in order to climb to the grand final of the TI11 SEA Qualifiers, and take their well-deserved rematch against Talon Esports.