The crown has been reclaimed. Blacklist International was once again named as the best Mobile Legends: Bang Bang (ML: BB) professional team in the Philippines in the recently concluded MPL-PH Season 10 Grand Finals held last Oct. 23.

Blacklist International becomes the first pro team to be crowned as the Kings (and Queen) of the Mobile Legends Professional League (MPL) thrice in the Philippines. 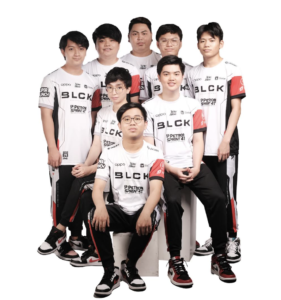 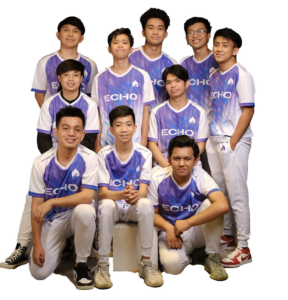 Let’s take a look at some of the best plays between the two teams during the grand finals: 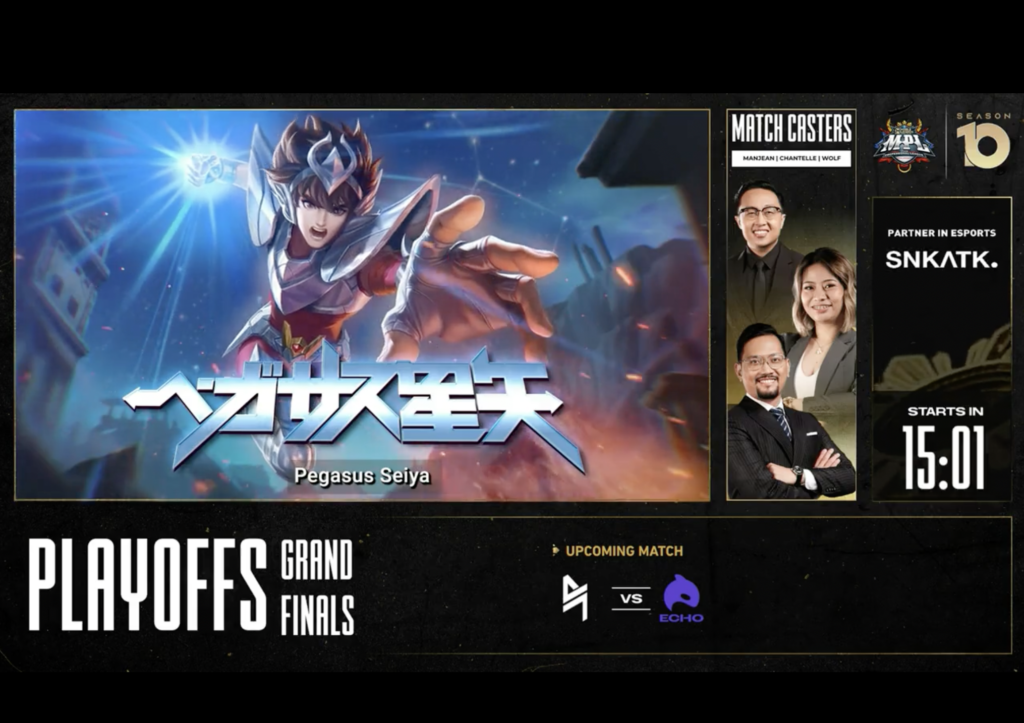 Watch the FB Live of the grand finals here 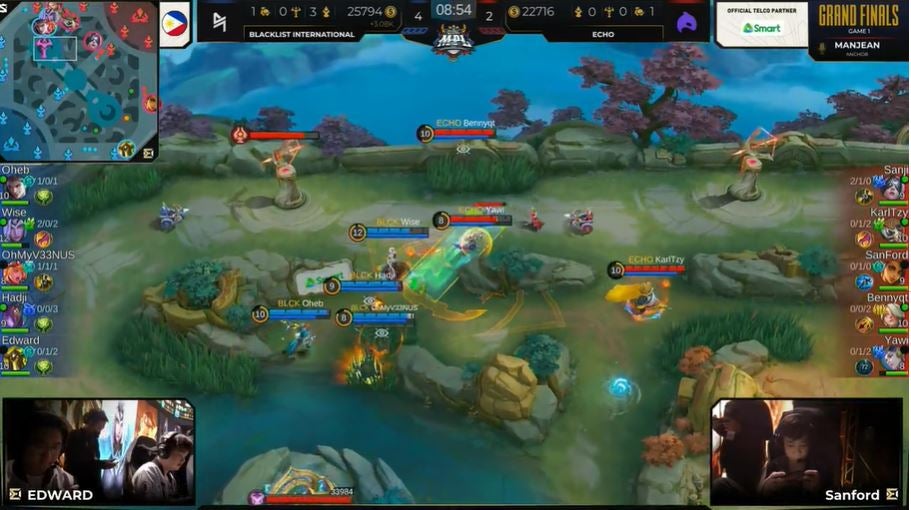 Danerie James “Wise” del Rosario, the jungler of Blacklist, proved that he has the widest and wildest hero pools in the game when he brought out Valentina in a dominating 13-5 game in favor of Blacklist.

Wise used Valentina’s kits to their fullest potential, copying the ultimate skills of his opponents and utilizing them during the perfect moments.

Johnmar “OhMyV33nus” Villaluna, the captain of Blacklist International, called for a conceal play during a potential turtle take and they quickly found Tristan “Yawi” Cabrera of Echo’s Kadita.

Fending them off, Yawi used Kadita’s Rough Waves, diving on makeshift waters, but was ultimately eliminated by Wise.

However, Blacklist’s Salic “Hadji” Imam on the Yve and Kiel “OHEB” Soriano’s Claude proved to be worthy backups for King Wise and Queen Venus, adding Karltzy and Bennyqt to their kill scores.

Yawi’s fresh fish got caught, along with his teammates, providing Blacklist with three kills and a turret to boot. 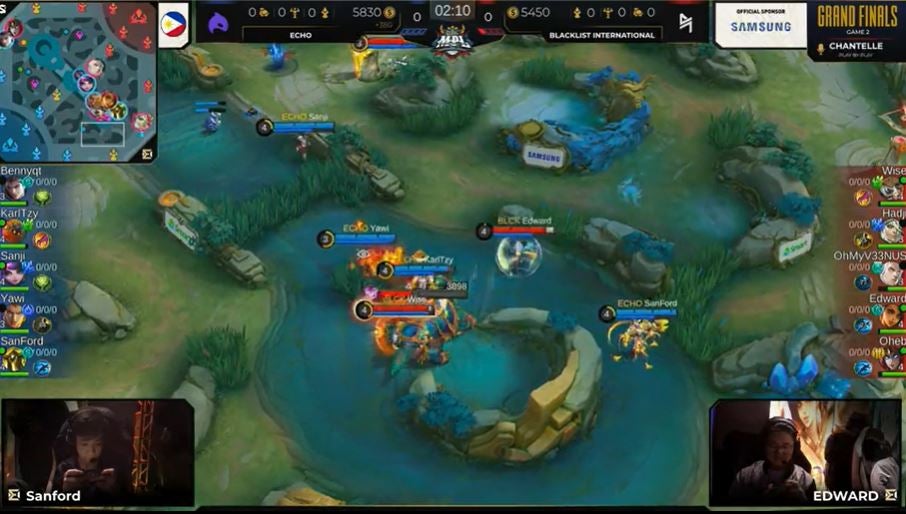 Many analysts, casters, and even pro players admit that Blacklist’s signature UBE strategy is hard to counter. But it seems that Echo was able to decode them, bringing out Yawi’s Valir in a double mage set-up with Alston “Sanji” Pabico’s Lylia.

While Blacklist unleashed its double sustain lineup with OhMyV33nus on her signature Estes pick, and Hadji on the Faramis, Echo clinched the game in a commanding 10-3 win.

Yawi’s mechanical use of Valir’s kit provided the utility that Echo needed during team fights and objective takes. Yawi and Sanji prioritized picking the Ice Queen Wand as their first items to limit their opponent’s movement speeds.

During the first turtle take, Wise’s Akai charged towards Karltzy’s Barats inside the turtle pit with Edward “Edward” Dapadap’s Esmeralda in tow. Little did they know that Yawi was sneakily hiding inside a bush, ready with his searing torrent to displace, slow, and stun Wise.

Sanji was quick to back Karltzy and Yawi up, taking the first blood onto Wise. Edward was caught in the middle of four Echo members, including  Sanford “Sanford” Vinuya’s Uranus.

OhMyV33nus and Hadji tried to back him up, even using the Faramis’ cult altar to save Edward, but the AOE (area of effect) damage from Yawi, Sanji, Karltzy, and Sanford, slowed them down, killing Edward in the process.

The push and pull displacement skills from Yawi and Karltzy, as well as the slows and the high magic damage from Sanford and Sanji, as well as the constant push pressure from Bennyqt’s Claude forced Blacklist to retreat and not retaliate.

However, with the constant tower push and the pressure from Echo, Blacklist’s UBE was ultimately burnt to ashes. Yawi was declared the MVP of the game with 90% kill participation at 1/1/8 KDA. 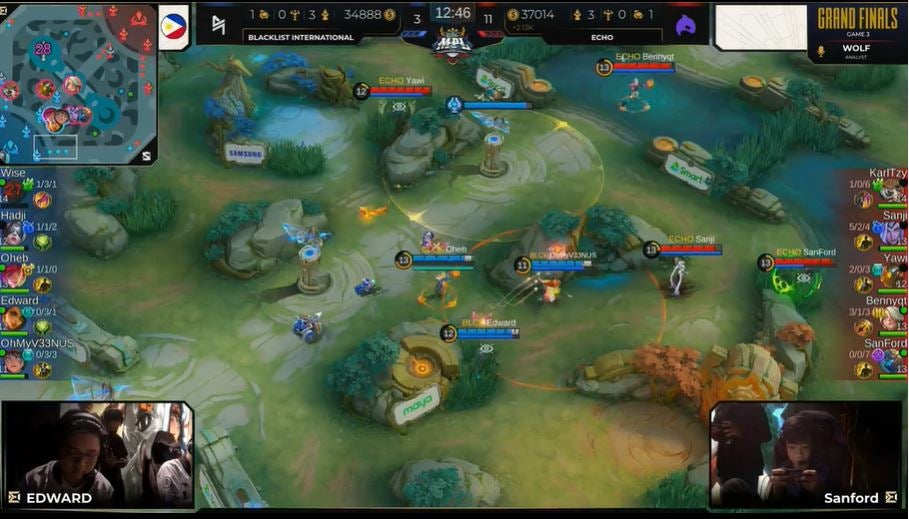 Echo’s win in Game 2 gave them the much-needed morale boost to face a dynasty off. The team of purple Orcas took Game 3 in another one-sided game, 19-6, with Yawi playing as a roamer Jawhead.

And while Yawi’s on-point Ejector plays, complemented by the Daytona’s Welcome of Karltzy’s Barats, were commendable, it was Sanford’s Grock Flicker-Wild Charge combo that sealed them the game.

Just 46 seconds past the 12-minute mark, Sanji’s Valentina baited OhMyV33nus’s Mathilda, Oheb’s Beatrix, and Edward’s Esmeralda to come near a bush where Sanford’s Grock was waiting for an ambush.

When they were already grouped up in a tight spot, Sanford unleashed Grock’s famous Flicker-Wild Charge combo with Sanji and Bennyqt’s Melissa on the backline free hitting.

Karltzy and Yawi flanked the members of Blacklist, displacing Oheb and Venus. Oheb was the second casualty in that 5-man assault, while Venus tried to sustain and run for her life, but even using all of her tool kits was not enough to keep her alive. 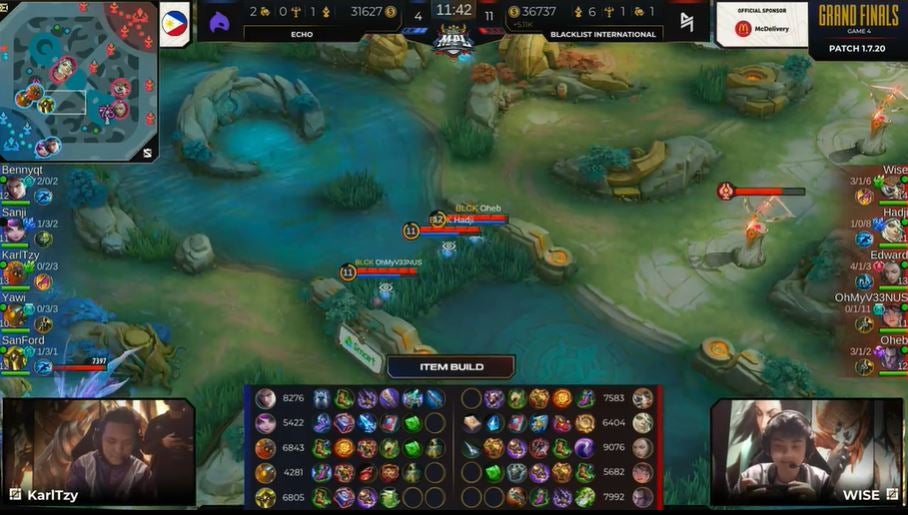 Blacklist has seen better days with sweeps coming in here and there during the regular season and the playoffs, but fighting a somewhat losing position was not an unfamiliar territory.

As if saying that it has a new flavor of the UBE Strategy, Blacklist’s Edward, also known as Agent Zero, was phenomenal in his use of the Benedetta, one of his signature picks during the 7th Season of the MPL.

His sneaky play of keeping pressure on the side lanes of Echo, forced members of the Orcas to retaliate, while other members of Blacklist used that opportunity to take objectives.

While Karltzy was trying to secure his purple buff with the help of Sanford’s Uranus and Yawi’s Jawhead, OhMyV33nus’ Mathilda initiated a team fight with the Guiding Wind, bringing Oheb’s Brody and Hadji’s Faramis following suit.

The Blacklist squad quickly bursted Sanford with Hadji’s Ghost Bursters and Oheb’s Torn Apart Memory; Wise’s Akai and Edward were there for the follow up, with Edward dashing in with Bendetta’s Alecto: Final Blow and Petrify combo against all four remaining members of Echo.

Echo members collapsed to the middle lane to give them more breathing room, but Blacklist was out for blood, killing Sanji’s Lylia.

Blacklist equalized the game winning the series 22-6 thanks to Edward’s prowess on splitting the map, while four of the Blacklist members grouped up.

Top-tier play #5: Patience is key, just a minute to reclaim the crown 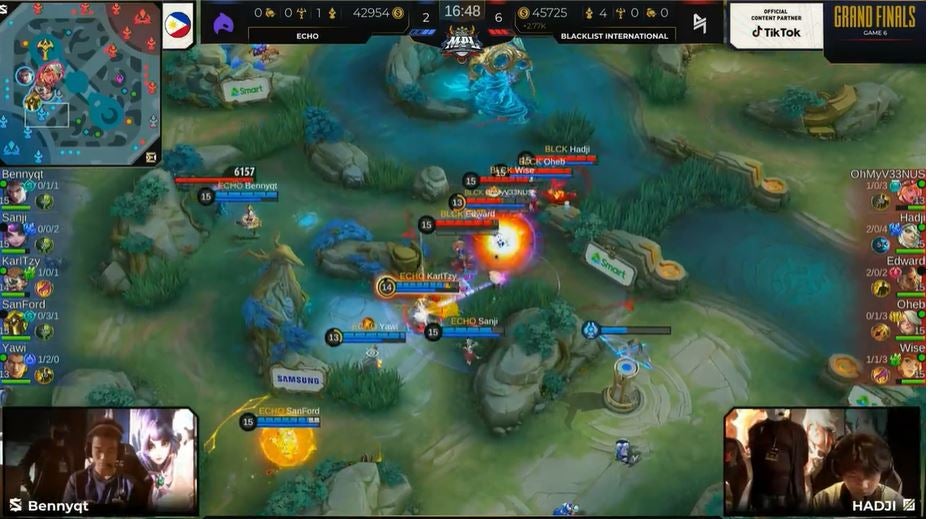 Blacklist took Game 5 with a commanding lead of 19-7 and Hadji’s Pharsa taking a Maniac against Echo. And, while that very quick game of less than 14 minutes gave Blacklist match-point advantage, the Agents employed patience in the last game of MPL Season 10.

In a match that went for 17 minutes and 43 seconds, Blacklist once again allowed Wise to pick an unconventional hero for the jungle: Guinevere. The Queen was on her favored Lolita, Hadji once again on the Faramis, Oheb on the Melissa, and Edward using another one of his signature picks, Paquito.

Echo tried to resonate on their successful double-mage lineup that earned them a victory against Blacklist, once again giving Yawi the Valir and Sanji the Lylia. Karltzy used the Akai for the Jungle, Sanford, the Uranus, and Bennyqt, Claude.

The early to mid parts of Game 6 were low-scoring at 5-2, in favor of Blacklist. Both teams were careful with their moves and prioritized objectives over team fights.

But the jungling pattern of Wise, coupled with Oheb’s masterful use of Melissa’s poke abilities, Hadji and Venus’ constant rotations, as well as Edward’s quick responses, allowed them to farm better than Echo.

For about four minutes, Blacklist members tried to use their advantage to bait out Echo within the lord pit. They patiently waited for the right opportunity to pounce on the Orcas and get their third MPL championship.

About 42 seconds after the 16th minute of the game, the Queen made a gamble: A conceal play onto Sanji, forcing Karltzy and Yawi to back him up.

With the perfect use of Lylia’s Black Shoes, Sanji was able to survive the onslaught, and Bennyqt’s Claude quickly used his Blazing Duet to pick Blacklist Members off.

But OhMyV33nus was ready with Lolita’s Guardian’s Bulwark, shielding the members of Blacklist from the heavy artillery of Bennyqt. Hadji further sustained the game by using the Cult Altar, allowing members of Blacklist to re-engage with a sneaky Noumenon Blast from the Queen, catching Karltzy, Sanford, and Bennyqt and allowing Oheb and Hadji to free hit their opponents.

Karltzy and Bennyqt were the first two casualties, but Wise was itching to get his hands on the trophy: He used Guinevere’s Spatial Migration to catch Sanji inside the outer turret, while the other members of Blacklist bursted him down.

Sanford and Yawi were the only two members left, and with a minion wave coming in, Blacklist was able to tear down through up until the base turret on the middle lane.

Remaining Echo members tried to fend off the minion wave to prevent Blacklist from ending the game, but they were quickly bursted down by all five Agents, allowing them to cleanly close the MPL in a Game of 9-3.

MPL Philippines was powered by Smart Communications Inc. as its official telco partner, solidifying its support for the development of the Philippine esports scene.

In a more recent report covering Q3 2022, Ookla said Smart is still the fastest mobile network for Android, Apple, and Samsung devices in the country, delivering between 35 to 75 percent faster speeds for 5G, LTE, and across all network technologies compared to the next top mobile provider.

Know more about how Smart enables subscribers to level up their gameplay by visiting https://smart.com.ph/prepaid.