In a clean 4-0 sweep in a best-of-seven series, the Orcas dominated the M4 Championship Grand Finals and decimated the proven-and-tested strategy of Blacklist International. 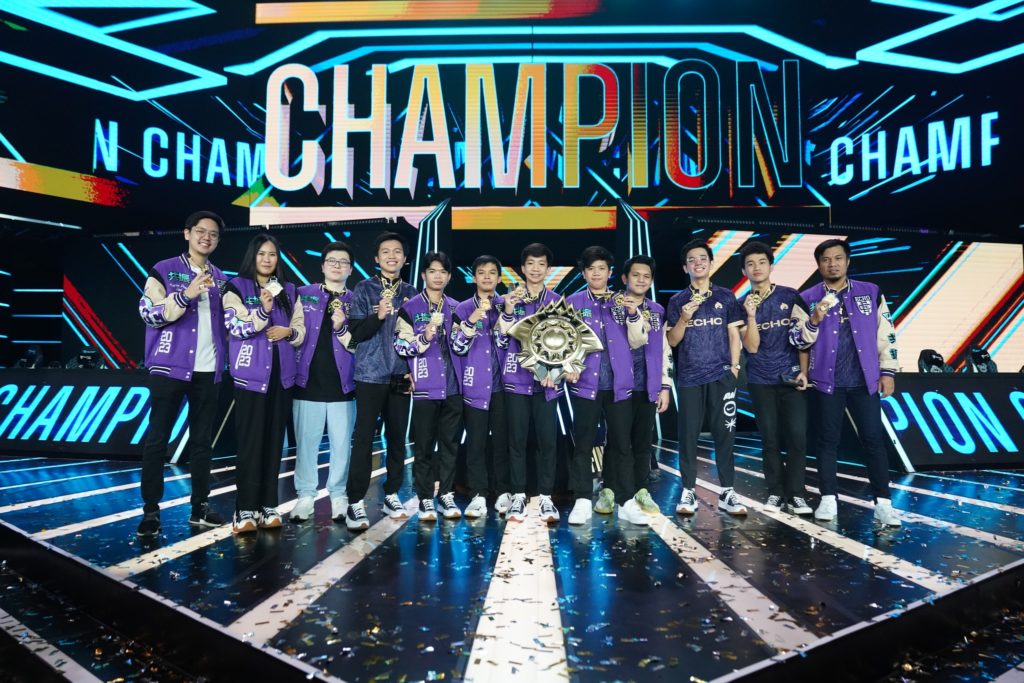 Millions of Filipino fans witnessed the epic showdown of the two teams with the livestream and coverage of Smart, Mobile Legends: Bang Bang’s longtime official telco partner in the Philippines.

Blacklist International, the defending champs, had a steady climb from the playoff to the knockout matches, securing the first slot in the grand finals, after defeating ECHO in the upper bracket finals.

The boys in purple and white had to face off RRQ Hoshi, branded as the King of Kings of MLBB, trampling over the Indonesian team’s home court, 3-1.

It was a rematch not only of the upper bracket finals at the M4 World Championship but also of MPL Philippines Season 10, where Blacklist International reclaimed the crown and strengthened the dynasty it built.

However, in an almost unexpected turn of events, the agents had no direct answer as to how they would reverse ECHO’s decoding of their game plan — the Ultimate Bonding Experience (UBE) strategy.

So what codes did ECHO break in order to secure a dominating match against the unyielding spirit of Blacklist International?

Here are five components of the ECHO Express Strategy that brought them to victory:

Listen to the opponent

Blacklist Team Captain Johnmar “OhMyV33nus” Villaluna has always been the focal point on why the UBE Strategy worked for almost two years in a row.

Playing the Estes card was the team’s key to victory. In all four games, ECHO respected The Queen and banned Estes from all four games, and in some instances, ECHO gave its roamer Tristan “Yawi” Cabrera signature V33 heroes to further deny her of comfort picks.

V33 had repeatedly said during interviews at the M4 stage that not banning her Estes was the downfall of several teams during the tournament.

It seems that the ECHO Express Strategy revolves around the use of massive crowd control skills to enable one or two burst heroes to freely annihilate the opponents.

ECHO in all four games always had at least 90 percent of their heroes having massive crowd control skills, prioritizing hero picks such as the Fredrinn, Lolita, Akai, Gloo, Franco, Kaja, and Barats.

Karl “Karltzy” Nepumoceno, the first player to ever win the M Series twice, was completely activated as the utility jungle of ECHO in all four matches thanks to the multiple layers of crowd control skills from him and his teammates.

This allowed them to secure neutral objectives, pickoff opponents, push turrets and end almost all four games — except for the last one — in under 15 minutes.

It is no secret that finding the right targets should be the name of the game, but executing it masterfully is a whole other discussion.

In all four games, ECHO rookie experience lane player Sanford “Sanford” Vinuya showed the world how to skillfully prioritize the right target. He is only 16 years old.

For instance, in Game 3, his strategic use of Lapu-Lapu’s ultimate after a crucial game-deciding fight at the Lord pit was able to slow down the retreat of four Blacklist star players, including the mid lane artillery mage, gold lane marksman, experience lane fighter, and roamer.

With that play, less than 30 seconds later, ECHO closed the match, 3-0.

Another crucial moment was in Game 4, when Sanford baited out the enemy jungler with his Gloo. He used this opportunity to dash into the enemy marksman, removing the chance of Blacklist to defend their base and their crown.

Another rookie who showed tenacity even at 17 is Alston “Sanji” Pabico, the mid lane mage of ECHO.

His explosive use of long-range artillery Yve and Pharsa allowed ECHO to prioritize objectives and pick enemies off due to his commanding presence.

But Sanji was not a one-trick pony. He can also be flexible.

When both Yve and Pharsa were unavailable for him to use, Sanji went for an assassin mage hero that made its debut in the M4 Stage only at the Grand Finals: Gusion.

Sanji’s use of the hero was a masterclass on pickoffs. He finds a triple kill after a successful turtle take, prioritizing low-health opponents and diving into long-range heroes during Game 3.

Patience gets you the MVP 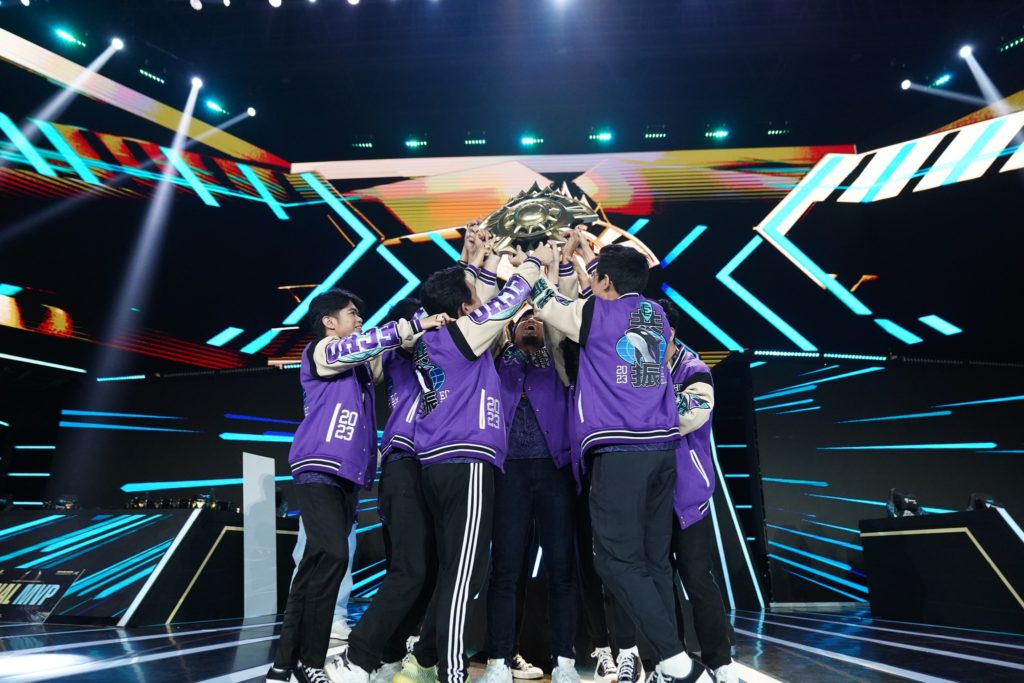 They say victory takes patience and discipline and Benedict “Bennyqt” Gonzales is the epitome of these two essential pro-player characters at the championship match.

From diligently farming the gold lane for minutes to get his power spike before joining team fights to pummeling enemies like a thunderstorm, Bennyqt was a force to be reckoned with.

He knew he was crucial in the latter parts of the game. Hence, he patiently waited for his correct timings and positioned himself where he could freely hit the enemies. This allowed him to reap the benefits of his late-game heroes Brody and Lunox.

In the second match of the series, his hero Brody hid in a bush in the river area in anticipation of a turtle take. He stayed in that position for 33 seconds, resisting the urge to hit enemies that come near his area.

In Game 2, when his teammates started to engage, he revealed himself and started hitting enemies with his skills down to his ult and flicker, slaying the enemy marksman, M3 MVP Kiel “Oheb” Soriano, and taking the turtle for his team.

If there is one thing that Bennyqt’s patience taught us, it’s that patience may get you the MVP of the whole tournament.

During the finals game, Mobile Legends: Bang Bang developer Moonton has unveiled that the upcoming M5 World Championship will be hosted in the Philippines in December.

Philippines holds the number of crowns in the Mobile Legends World Championship. Bren Esports for M2, Blacklist for M3 and now Echo Philippines for M4.

As the longtime official telco partner of MLBB in the Philippines, Smart has cemented its position as a staunch supporter of e-sports – including e-sports athletes, fans, game publishers, and tournament organizers – in the country.

Filipino gamers can enjoy leveled-up gaming experiences powered by Smart, the Philippines’ Fastest and Best mobile network, according to Ookla, the global leader in mobile and broadband intelligence.

In compliance with the SIM Registration Law, Smart encourages all its subscribers to have their SIM registered.

Smart Prepaid and TNT subscribers can visit the https://simreg.smart.com.ph/ portal.

Smart Postpaid users, on the other hand, simply need to confirm the personal information and IDs they submitted for their postpaid plan application by texting YES to 5858 and wait for the confirmation message from Smart.

Learn more about how Smart enables subscribers to level up their gameplay by visiting https://smart.com.ph/Prepaid/whats-new/gigagames.