As mid-March approaches, Teamfight Tactics: Galaxies is soon to take over the Rise of the Elements bringing an intergalactic universe to play around with on the Riot Games autobattler. In the upcoming patch, we’ll see all-new origins, classes, items, maps, and little legends invade the board.

Riot Games held a tournament showcase of the set with Li Luo taking home $15,000 with his sorcerer-mech pilots build. Need a guide to venture the vast galaxies in Set 3? Don’t worry, we’ve compiled everything you need to know for Teamfight Tactics: Galaxies. 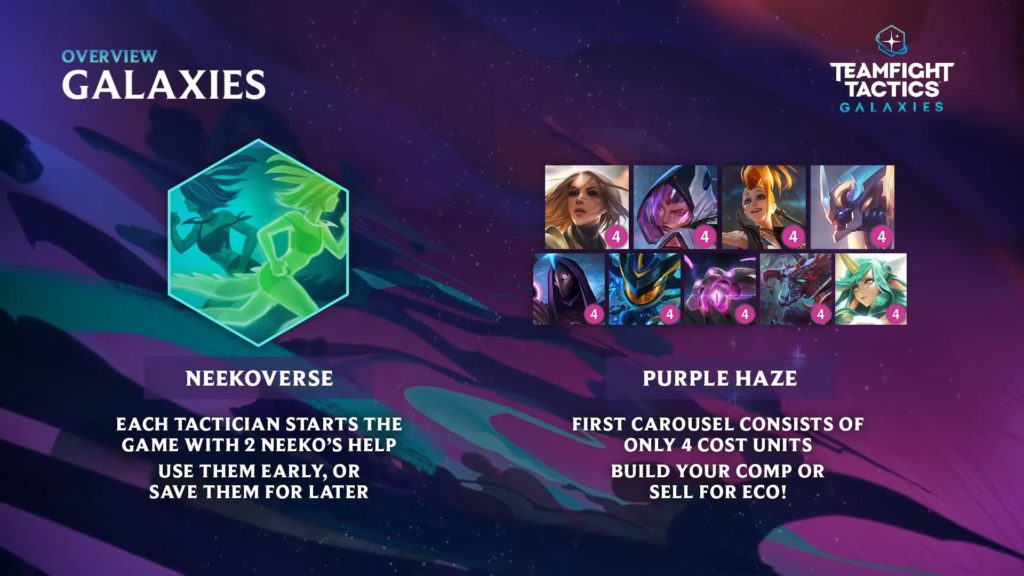 To start it off, games will be played out in three types of boards at random: normal, the Neekoverse, and the Purple Haze galaxies. The Neekoverse galaxy will allow players access to Neeko’s Help to start their board early or save it for later on. While, Purple Haze starts with a carousel with only 4-cost units which will allow players to either sell the unit for economy or hope to build around it with the proper items and units.

Furthermore, the carousel and minion rounds have been tweaked at random to have full items at load out or even a carousel with the same item component for everyone in the game. For example, later on during the main minion round where you will be facing Kayn, Kayn can have three full items to be given out to everyone at random which is set to give a ton of variability to gameplay on the galaxy.

Win streaking and loss streaking has also been made more competitively viable with players being able to earn the same amount of gold either way. More galaxies are set to be introduced soon once Teamfight Tactics: Galaxies rolls out. 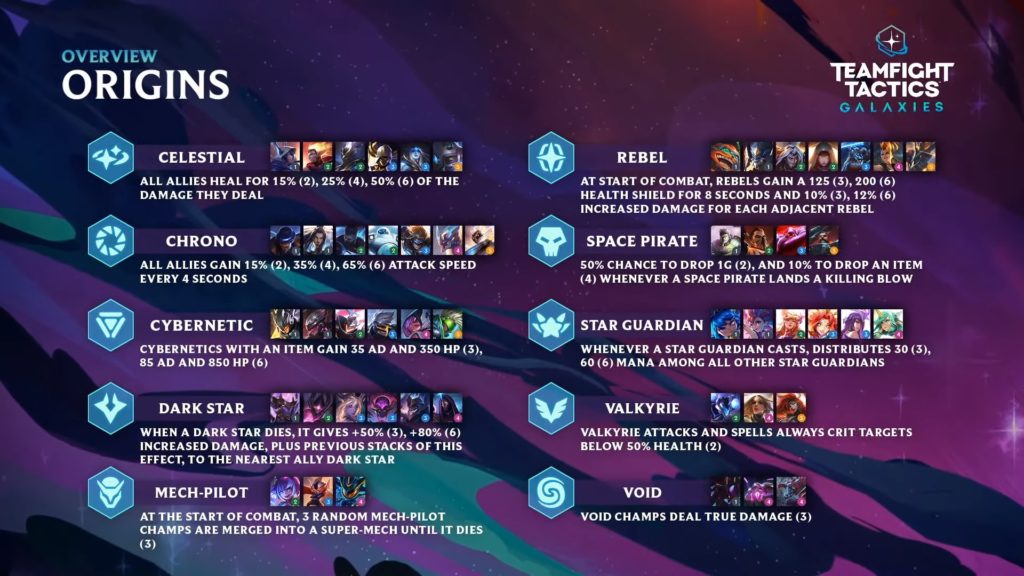 In Set 3, Teamfight Tactics is reinventing their origins to fit the galaxy concept for the set. Origins are divided into major and minor origins, with the former being capable of creating extensive compositions such as Celestial, Dark Star, Chrono, Star Guardian, Rebel, and Cybernetic while the latter have particular niches that amp up one’s board such as Mech-Pilot, Space Pirate, Valkyrie, and the all-too-familiar Void.

Teamfight Tactics: Galaxies is filled with unique origins such as Mech-Pilot, which forms a super-mech if all the mech-pilots are present,  and Space Pirate which has a chance of dropping gold and items when they land a killing blow. The Major origins are straightforward and have strategic variety to encourage players to try out compositions in tandem with the supporting minor origins.

The pinnacle 5-cost units in Ekko, Thresh, Gangplank, Miss Fortune, Aurelion Sol, and Lulu can turn the tides even harder when it comes to the later stages of the game as accruing gold will be harder to accomplish in Teamfight Tactics: Galaxies. Since players will be taking less damage from their losses earlier on, they can strategize their wins and losses to their health to maximize gold generation. 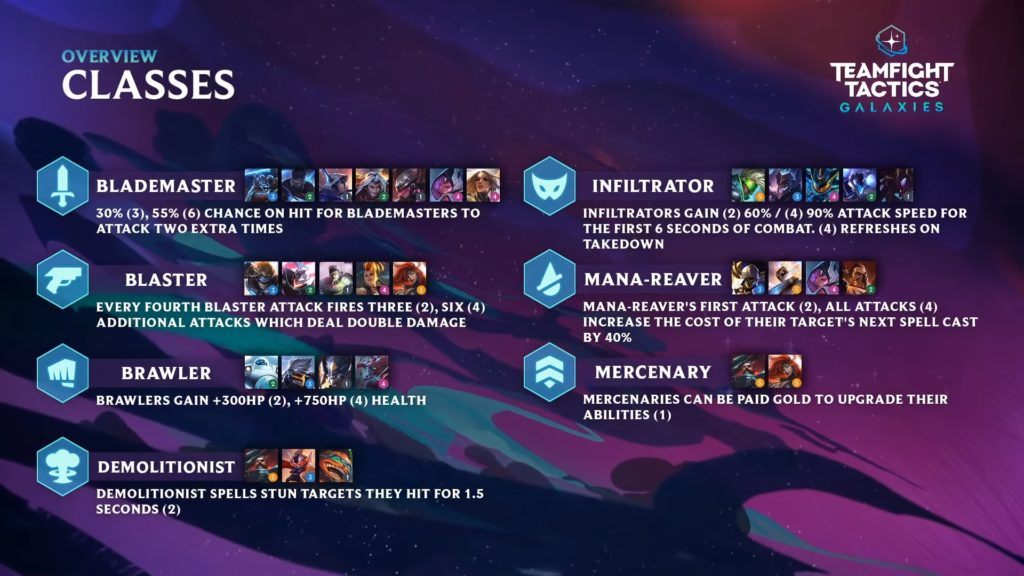 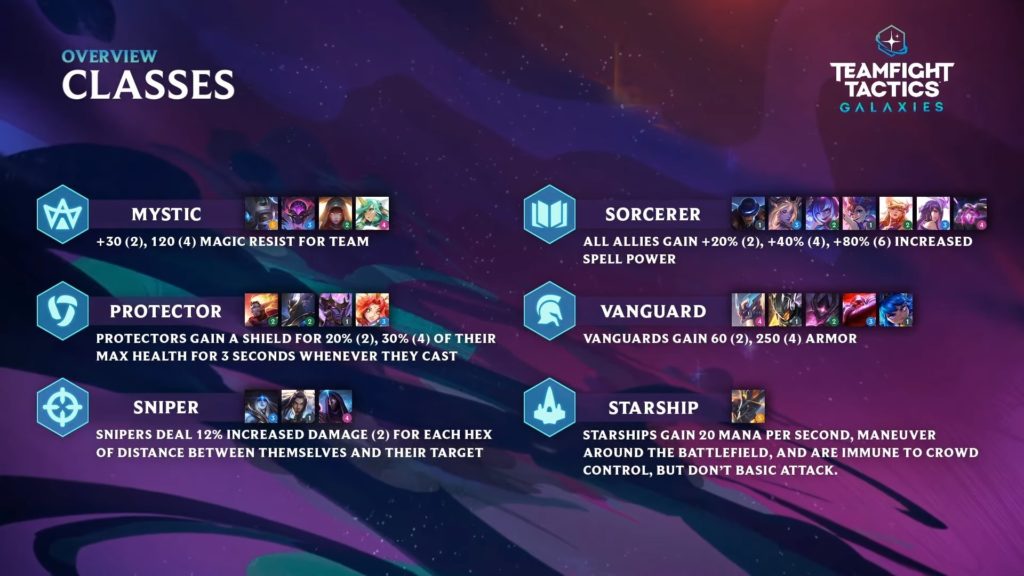 Meanwhile, the classes are a callback to the past with blademaster, brawler, mystic, sorcerer, vanguard (warden), and blaster (gunslingers) all coming back from the previous sets. But of course, unique potent classes such as Demolitionist, whose spells stun targets, Protectors, who gains a shield whenever they cast their spells, and Snipers that deal increased damage for each hex distance between themselves and their target. There’s a breadth of strategies to try out with synergies such as infiltrator and blademaster (think assassin and blademaster) and star guardian with sorcerers in the all-new set. 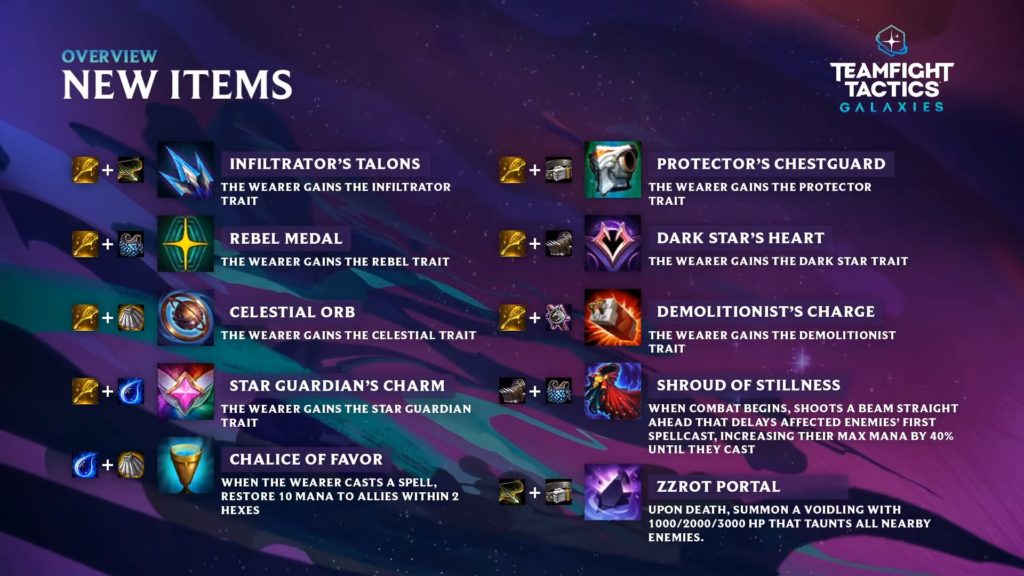 Lastly, aside from the past items such as Guinsoo’s Rageblade and Lord Dominik’s Regards, brand-new spatula items to compliment the new classes are going to be introduced in Teamfight Tactics: Galaxies. Additionally, the new items ill open up compositions to favor spellcasters such as the Chalice of Favor and counter them with Shroud of Stillness, while Zzrot Portal will once again enter the fray to annoy the enemies with a voidling that taunts nearby enemies.