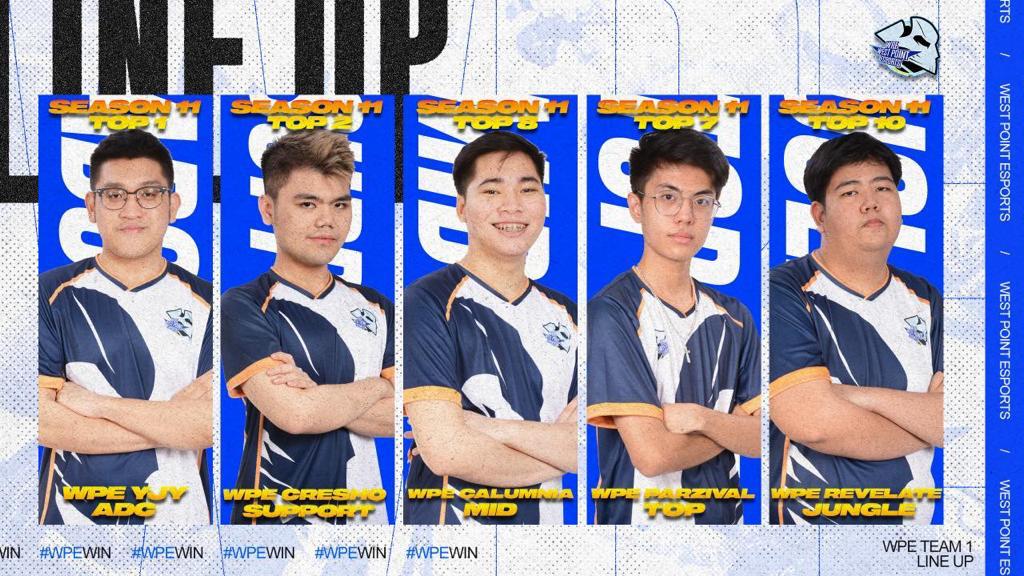 MANILA, Philippines — With barely 3 weeks to go before the League of Legends (LoL) PC event for the upcoming 31st SEA Games in Hanoi, Vietnam, West Point Esports (WPE), keeps its focus on the goal, and that is, to secure a medal finish in the tournament. The task is a herculean one because defending their home crowd is title favorites GAM Esports, the winner of the recent Vietnam Championship Series (VCS).

GAM Esports is one of the best teams in the world and have qualified in Worlds Group Stage before. Also in the mix is Team Malaysia bannered by players from Sem9, a Pacific Championship Series (PCS) team. For Singapore, it’s a mix of pros and semi-pros from PCS as well. These 3 countries, are the favorites to win the medals in this event but the other Southeast Asian countries, Philippines included, will try to join the mix.

Out of the 5 WPE player, 4 are currently studying therefore their training time is not as much as compared to the pros that they will be facing. WPE’s top laner, Hezro “Parzival” Canlas, is a Civil Engineering student. WPE’s Jungler, Jan Raphael “Revelate” Retance, is a BS IT student.

For the bot lane, Jan Edward “Cresho” Hortizuela, is a BS IS student and former top 1 (Season 11) in PH, David Emmanuel “Yjy” Tapang is currently in Senior High School. Despite their busy schedule in studying and at the same time, fulfilling their household obligations and other personal matters, WPE trains in all possible available common time of the group. This is usually done in the late afternoon up to the evening against foreign teams.

In order to train extensively, the players have to adapt to the innate problems that we all have in common, which is slower internet as compared to the other foreign teams. The players are considered individually good, they were all included in the Top 10 Challengers last season but it takes more than a collection of individual skills to build a team. It takes a lot of practice to develop proper communication and synergy with the other team member. The tiniest mistakes at this game can be capitalized by more experienced and formidable opponents.

The growth of WPE, originally established as a non-competitive team but an aid to the team owner’s business, has been a journey of dedication, commitment, perseverance, and sacrifice. While the pandemic has definitely changed the landscape of competitive gaming that saw the rise and shift to competitive mobile gaming, WPE strives to give back to the community by opening opportunities to deserving and high-potential players.

One of the long-term plans of WPE is to invite foreign teams and conduct a tournament here in the Philippines and give the LoL PH community the experience of competing against foreign teams. As a self-sponsored team, WPE maximizes its resources by training the team and at the same time, giving back to the community.

Despite the odds against them, the players from WPE, with the support from its management, are not shaken by the tough competition ahead. This fight goes beyond personal gains but rather, to give the country the glory it deserves. The team aims to help the Philippines retain its overall championship in the Esports category which we originally won last SEA Games.